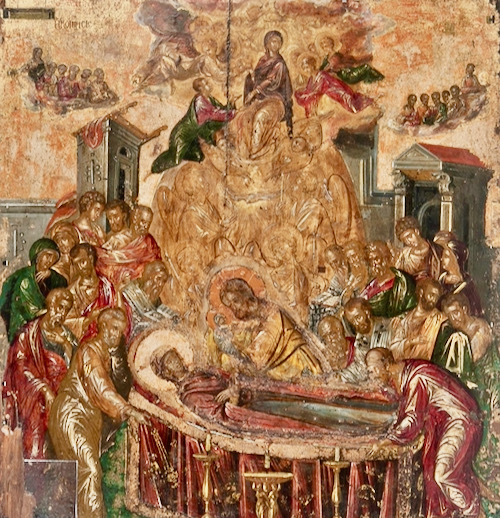 An image of the Assumption of Mary, portrayed in a window in the Church of St Aloysius in Somers Town, London. Photo by Lawrence OP, courtesy of Flikr

SUNDAY, AUGUST 15: It’s been 70 years since Pope Pius XII defined the Assumption of Mary to be an infallible dogma of faith, and today, Catholics are part of the observance that both branches of Christianity—West and East—acknowledge, in an event that is known as the Assumption of the Blessed Virgin Mary / the Dormition of the Theotokos. Two names for the same event, both the Assumption and the Dormition proclaim that Mary, the mother of Jesus, was assumed into heaven in body and soul.

NEWS 2021: In what is being called a “cultural revival,” the Virgin Mary is rapidly becoming a type of icon for a younger global generation, as clothing, hats and more, all featuring images of the Virgin Mary, become increasingly more popular. Seen by some as a figure for values like social justice, the Virgin Mary is being called a “relatable” figure of faith. While the iconic popularity is controversial, Catholic author and University of California, Berkeley lecturer Kaya Oakes, in an article at Broadview.org, voiced no surprise at the new attention paid to Mary: “Mary represents this side of God that is nurturing and will stay with you when you’re in pain,” Oakes said. “We’re coming out of this really traumatic phase in world history with the pandemic, and people have needed images of God that were more resonant with that compassionate, rather than judgmental, side of the divine.”

MARY THROUGH THE MILLENNIA

While no evidence of Mary’s Assumption exists in scripture, the belief has been engrained in both branches of Christianity for centuries. The Church points to passages in Revelations, Genesis and Corinthians, to mention of a woman “caught between good and evil” and to those “fallen asleep” after Christ’s resurrection. Theologians and Christians have pointed out that a woman so close to Jesus during his earthly life would have naturally been assumed into Heaven, to be with him there.

In the East: Eastern Christians believe that the Virgin Mary died a natural death, and that her soul was received by Christ upon death. Three days following, Mary’s body was resurrected, and she was taken up into heaven, bodily.

In the West: The Catholic Church teaches as dogma that the Virgin Mary, “having completed the course of her earthly life, was assumed body and soul into heavenly glory.” Within Protestantism, views often differ.

No details specify the day or year of Mary’s Assumption, though it is believed that when Mary died, the Apostles flocked to her bedside. At the moment of her death, Jesus Christ descended, and carried her soul to Heaven.