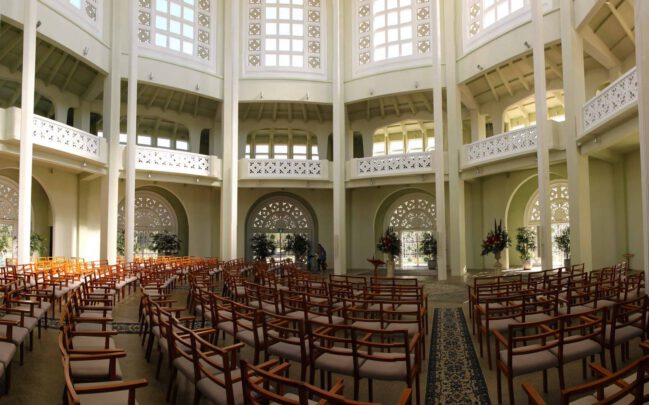 The interior of a Baha’i house of worship in Sydney, Australia. Photo courtesy of Wikimedia Commons

SUNSET TUESDAY, OCTOBER 25 and SUNSET WEDNESDAY, OCTOBER 26: Million of Baha’is worldwide will celebrate the “Twin Holy Birthdays,” as adherents of the faith rejoice in the birth anniversaries of the two figures most central to their faith: Baha’u’llah and the Bab.

Events commence worldwide, as Baha’is first celebrate the birth of Baha’u’llah—the “Promised One”—and the Bab—the forerunner of their faith, who is known as “the Gate.”

In questions submitted to Baha’u’llah after he wrote the “Kitab-i-Aqdas,” Baha’u’llah described his own birthday and the birthday of the Bab as “twin birthdays” that are “one” in the “sight of God.” Though the birthdays had been celebrated according to the solar calendar each year in most of the world—and Baha’u’llah’s birthday fixed on November 12—that changed in 2015. The Universal House of Justice—the governing body of the Baha’i faith—announced that from March 20, 2015 onward, the “twin birthdays” would be observed on the first and second days following the eighth new moon after Naw-Ruz, and the observation date of the Birth of Baha’u’llah would change annually. These “Twin Birthdays” are now celebrated by Baha’is as one annual festival, wherein the closely interwoven lives of these two figures are commemorated together.

THE BAB AND BAHA’U’LLAH: TWO LIVES, ONE MISSION

Born on October 20, 1819, the Bab would eventually declare his mission as preparing people of the world for the Promised One (Baha’u’llah). The Bab was born Siyyid Ali-Muhammad, in Persia, and at the age of 24, Siyyid announced the coming Messenger of God—the Promised One awaited for by multiple world religions. Siyyid changed his name to “the Bab” (meaning “the Gate”) and made his life a mission for the Promised One.

Six years following his first prophesy, the Bab was executed. The Shrine of the Bab now stands in Haifa, Israel, and attracts throngs of Baha’is on the birth anniversary of the Bab. Baha’u’llah described the Bab this way: “the Herald of His Name and the Harbinger of His Great Revelation, which has caused … the splendor of His light to shine forth above the horizon of the world.”

Mirza Husayn Ali (who would become Baha’u’llah) was born November 12, 1817, in Tehran, Persia (now Iran). The son of a wealthy government minister, Baha’u’llah was born into wealth and prestige. His family’s lineage could be traced to the ruling dynasties of Persia’s past, and at the time of his birth, Mirza Husayn Ali’s family still exercised influence over the court of the Shah.

From a young age, Mirza Husayn Ali was rumored to be “different” than his peers. The child was wise beyond his years, showed immense compassion for the poor and displayed an unusually alert mind. In adulthood, he showed support for the Bab and the emerging Babi religion; in 1863, Mirza Husayn announced himself as the One promised by the Bab, and became known as Baha’u’llah. As the years passed, Baha’u’llah was subject to exile, violence and imprisonment.