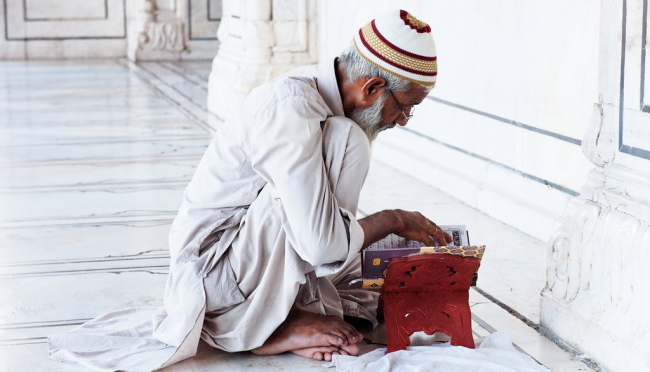 A Muslim man learns and prays in a mosque in India. Photo by Riccardo Maria Mantero, courtesy of Flickr

SUNSET THURSDAY, JULY 30: Muslims worldwide express joyful appreciation for Ibrahim (Abraham) and his complete willingness to make a sacrifice during Eid al-Adha, the Feast of the Sacrifice. (Note: Dates and spellings vary.) On the morning of Eid, crowds typically spill out of mosques, into open fields and in parks, as Muslims celebrate both Ibrahim’s devotion and the miracle that took place on the sacrificial altar; this year, coronavirus measures will change how Muslims are gathering. Officially, Eid al-Adha begins after the descent of Mount Arafat by the pilgrims on Hajj in Mecca.

NEWS 2020: Saudi Arabia recently announced that for Eid al-Adha, prayers will only take place at certain mosques and the government’s preventative measures will be carried out (read more in this article, from Arab News). In Morocco, government officials are warning citizens to limit travel and avoid crowds for Eid al-Adha; in Indonesia, fewer animals will be sacrificed this year due to a lower demand. In Iraq, the nationwide nighttime curfew will be lifted after Eid al-Adha, and malls, airports and restaurants reopened; in multiple countries worldwide, online purchases will be the most popular (and only, in some regions) route for animal sacrifice for Eid al-Adha in 2020.

IBRAHIM, ISHMAEL AND THE MIRACLE

As often happens near this Eid, or holiday, special programs adapted to these Muslim customs help to provide a holiday meal to all observant families. One example: Here’s a news story this week from the Toledo, Ohio, area.

On the morning of Eid al-Adha, Muslims dress in their finest clothing and offer prayers (in most years, in congregation). Following prayers, adherents exchange festive greetings and give gifts (Eidi) to children. Even non-Muslims are invited to take part in the joyous feasts and festivities.

The events of Eid al-Adha often last between one and four days, although in some regions, various festivities carry on much longer.