MONDAY, AUGUST 4: Across India and in Hindu communities worldwide, the sacred bonds between brothers and sisters are honored on Raksha Bandhan. Over many centuries, the rakhi (from Sanskrit, “the tie or knot of affection”) has evolved from simple, handspun threads into bangles adorned in jewels, crystals, cartoon characters and even political figures. 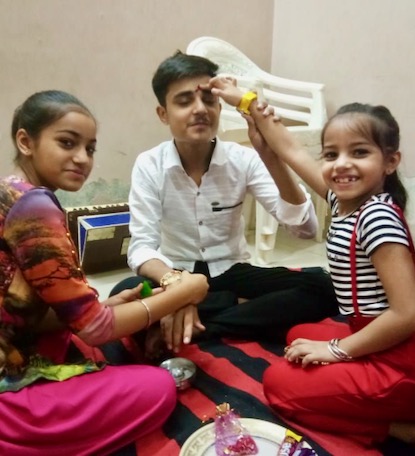 Two sisters celebrate the holiday with their brother in a photo this family submitted to the Wikimedia Commons 2019 campaign, called “Wiki Loves Love.” Photo credit: Aasthap-dsc.

Weeks before the culmination of Raksha Bandhan, Indian shops offer a bright palette of threads for women making their own rakhi; shops also are stocked with colorful premade rakhi. Men also shop market stands, searching for a token of love for their sisterly Raksha Bandhan companion.

The morning of the festival, brothers and sisters greet one another in, if possible, the presence of other family members. The sister ties a rakhi on her brother’s wrist, reciting prayers for his well-being and applying a colorful tilak mark to his forehead. The brother responds with thanks and a renewal of his sibling commitment, and the two indulge in sweet foods. The brother presents the sister with a gift, and everyone present rejoices in the gladness of family—often with a festive meal. 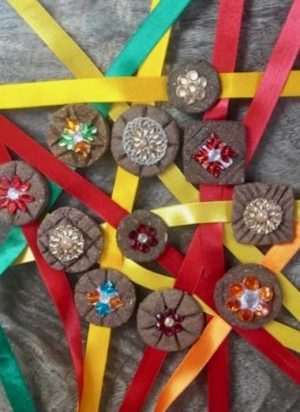 Raksha Bandhan is so popular that nearly every year government officials across India announce some kind of new service or public improvement related to the holiday. This year, one widely reported news story is a policy—in some regions—to offer free bus transportation for 24 hours so women can easily reach their brothers.

Each year, there also are efforts to encourage fitness on the holiday. One example, from The Times of India, suggests healthier choices for family banquets—and even suggests that a rakhi could be a fitness band.

Many families and organizations enjoy trying to take their festivities to extremes—competing for slots in the record books. For 2019, India-based Prokerala magazine takes a look at some of the records—and attempts at records.

Finally—and only in India—one of the country’s shelters for cows, sacred animals in Hinduism, has sparked headlines across the country for its new line of cow dung rakhis. No kidding! It’s one of a number of fundraisers to help support the shelter.