SUNDAY, OCTOBER 31 and SUNDAY, NOVEMBER 1 and MONDAY, NOVEMBER 2—From Samhain to Mexico’s Day of the Dead to Halloween, world cultures celebrate the belief that at this time of year, the veil between this world and the next is particularly thin—and ancestors are held close. Don’t worry, it’s not all solemn and bone-chilling, though—today’s secular Halloween also brings out bright Jack-o-lanterns, loads of candy and a pretty good excuse for adults to join in on the fun with kids. So grab your best ghoulish mask and get the (Halloween) party started!

This year, the nation’s leading public-health experts are encouraging families to enjoy outdoor Trick or Treating. The most-shared advice in mid-October comes from Dr. Anthony Fauci, who declared:”Go out there and enjoy Halloween!” That line formed the headline of lots of subsequent newspaper and magazine stories. Fauci explained that during a typical Trick or Treat stroll, “You’re outdoors for the most part. Enjoy it. This is a time children love. It’s an important time of the year for children.”

In fact CNN has been predicting a Halloween “blowout.” CNN reported, for example: “The National Retail Federation expects Halloween spending to hit a record $10.14 billion. … Candy and chocolate sales are already soaring above 2020 levels, according to the National Confectioners Association, a trade group.”

Then USA Today detailed that spending: “Most of the spending will go to costumes: $3.32 billion, 27% more than last year and the most since consumers spent $3.35 billion in 2017. Almost as much–$3.17 billion–will be spent on decorations. And $3 billion will be spent on candy.”

However, that does not mean families can expect all of the typical pre-COVID traditions and events to be back on their regional schedules this year.

One big category of cancelations involves apartment complexes. Many high-rise complexes have cancelled Trick or Treating again this year, because children would be crowding into indoor spaces such as hallways and elevators. But the rules vary widely. Complexes with plenty of outdoor community space may still be holding events.

Bottom line: Check on any events in your community that you and your kids would like to attend.

One of the most highly recommended set of 2021 tips comes from The American Academy of Pediatrics’ website HealthyChildren.org, headlined: Halloween & COVID-19: Have Fun While Staying Safe. In addition to ideas for family fun, that list of tips ends with links covering food allergies and advice about face makeup and costumes that include decorative contact lenses.

Halloween’s secular side has emerged during the past century, and today, trick-or-treating, carving pumpkins, visiting haunted houses, watching horror movies and dressing up like favorite characters has become custom in Western culture. 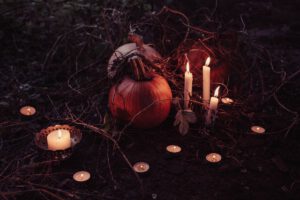 MUERTOS: DAY OF THE DEAD