THURSDAY, OCTOBER 7 and FRIDAY, OCTOBER 15: Hindus launch the nine-night festival known as Sharad Navaratri (English spellings vary; the name often appears without the middle “a”) on October 7, this year—an ancient festival that emphasizes the motherhood of the divine and femininity. Each night during Navaratri, Hindus worship a different form or characteristic of Mother Goddess Durga, who is regarded as being manifested in cosmic energy and power. In general, Sharad Navaratri is the celebration of good over evil, though many aspects of this tradition vary by region in India and around the world.

SINGING, DANCING IN THE STREETS 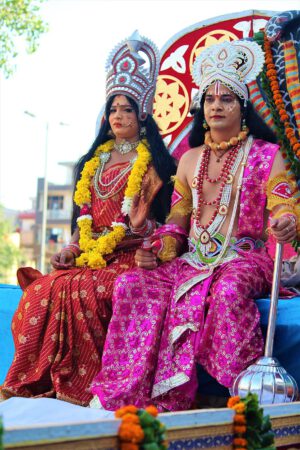 A celebration for Dussehra. Photo courtesy of PxHere

Navaratri brings out community-wide singing and music in India: nighttime dances in the streets combine with bountiful feasts and shrines are elaborately decorated. In Saraswat Brahmin temples, statue figures are adorned with flowers, sandalwood paste and turmeric.

FROM NAVARATRI TO DUSSEHRA

The festival of Navaratri culminates in the most celebrated holiday of all nine nights: Dasara (spellings vary). From the Sanskrit words for “remover of bad fate,” today’s Dussehra brings towering effigies to the streets of India, along with a host of ancient rituals and marked traditions. Many Hindus recognize the victory of Lord Rama over Ravana, a demon, during an epic battle over Rama’s wife, Sita. It’s believed that Ravana had 10 heads, and thus, 10 unfavorable qualities are rid from households with elaborate Yanga performances today; the unfavorable qualities include lust, anger, delusion, greed and jealousy.

In many parts of India, towering effigies of Ravana and his brothers are filled with firecrackers and exploded. Commonly met with cheers, the burning effigies are also seen as a cleansing ritual: onlookers are encouraged to burn inner evil and follow the path of righteousness. In northern India, a chariot holding devotees costumed as Lord Rama and Sita rolls down the streets; in southern India, homes are decorated with lamps and flowers.

Did you know? Dussehra is also known as Vijayadashami, the celebration of yet another victory involving goodness over evil: Goddess Durga’s defeat of the demon Mahisasura. According to this legend, Mother Goddess Shakti incarnated in the form of Goddess Durga.

Given the day’s auspiciousness, many Hindu (and non-Hindu) children begin their formal education today. Some devotees purchase new work tools—whether books, computers or farming equipment—and still others pay respect to elders and request their blessings. Families and friends gather for parties and feasting.