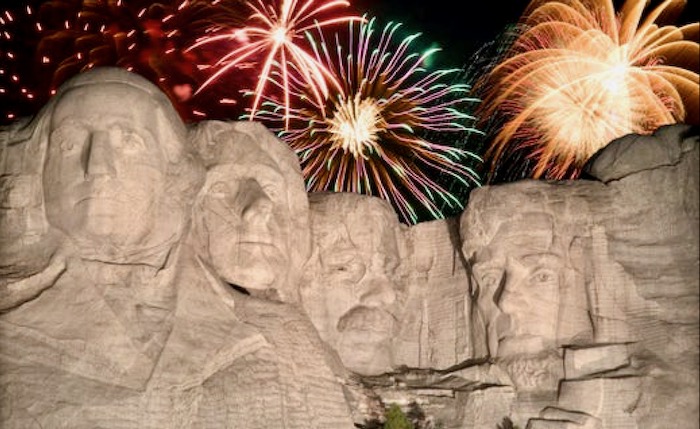 FIREWORKS have not been permitted at Mount Rushmore for more than a decade.

SATURDAY, JULY 4: Barbecues are firing up and backyard celebrations will be plentiful this Fourth of July, as many events turn private from public. While most patriotic parades and festivals are cancelled this year, that doesn’t mean that Americans aren’t holding festivities: In fact, residential fireworks sales are “sky-high” this year, as the number of at-home celebrations soars. Since some 2020 pandemic restrictions remain and many public fireworks displays are cancelled, most families are opting for a smaller-scale display instead.

Shooting off your own fireworks this year? Get safety tips from the Consumer Product Safety Commission.

Mount Rushmore National Memorial, which is sometimes called “The Shrine of Democracy,” celebrates Independence Day on both July 3 and 4. For 2020, programming and plans for both days are still being developed, but there will be a fireworks display the evening of July 3. The Memorial will reopen to the general public on July 4. For more details, visit the website.

The National Park Service has not held a fireworks show in more than a decade due to fire concerns—but President Trump pushed the idea this year, because of his long-standing love of the historic site and his claim that he hopes, one day, to see his own face carved on the mountainside. Meanwhile, Native American groups strongly oppose the event—and public safety experts are warning about the potential of COVID-spread and wildfires. Associated Press reports further.

As The Washington Post reports: “President Trump is planning a massive fireworks display at Mount Rushmore on July 3, despite a decade-long ban on pyrotechnics at the iconic spot because of concerns about public health, environmental and safety risks. Trump has wanted to stage fireworks at the national memorial in South Dakota’s Black Hills since 2018.”

With the fledgling battles of the Revolutionary War in April 1775, few colonists considered complete independence from Great Britain. Within a year, however, hostilities toward Great Britain were building and the desire for independence was growing, too. Thomas Paine’s 1776 pamphlet, “Common Sense,” fueled the unifying aspiration for independence. Though the legal separation of the Thirteen Colonies from Great Britain took place on July 2, 1776, it was two days later—July 4—when the Second Continental Congress gave its approval. 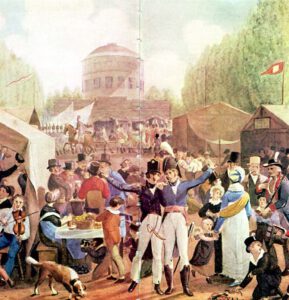 The Fourth of July in Philadelphia, 1819. Photo courtesy of Wikimedia Commons

A COMMITTEE AND A DECLARATION DRAFT

The year was 1776, and the weather was stifling hot as a brand-new nation was being formed. In June of that year, the Continental Congress appointed a five-person committee to draft a formal statement that would vindicate the break with Great Britain: Thomas Jefferson, Benjamin Franklin, John Adams, Roger Sherman and Robert R. Livingston. Jefferson, considered the most articulate writer in the group, crafted the original draft. On July 2, 1776, the Continental Congress officially declared independence from the Kingdom of Great Britain; a total of 86 changes were made to the draft before its final adoption on July 4, by the Second Continental Congress.

One year following, in 1777, Philadelphia marked the Fourth of July with an official dinner, toasts, 13-gun salutes, music, parades, prayers and speeches. As the new nation faced challenges, however, celebrations fell out of favor during ensuing decades. It wasn’t until after the War of 1812 that printed copies of the Declaration of Independence again were widely circulated, and festivities marked America’s Independence Day.

SALUTE TO AMERICA: FROM WASHINGTON, D.C.

A salute of one gun for each U.S. states is fired on July 4 at noon by any capable military base, and in the evening, A Capitol Fourth—a free concert broadcast live by PBS, NPR and the American Forces Network—takes place on the Capitol lawn in Washington, D.C. The White House has announced that President Trump plans to host an Independence Day celebration again this year, despite the coronavirus pandemic, with military demonstrations, fireworks and a speech. (Read more in the Washington Post.) 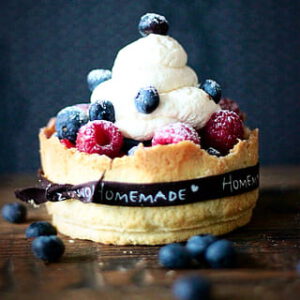 Get out those red, white and blue decorations and recipes!

Kids can craft decorations or their own apparel with help from Parents.com and Disney.com.

Interested in a lineup of patriotic movies? Forbes and Boston.com offer a top-10 list of movies, including “Red Dawn,” “Johnny Tremain,” “To Kill a Mockingbird” and “1776.”