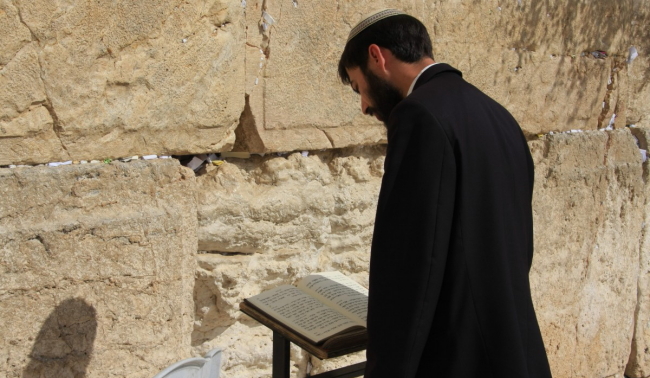 A Jewish man at the Western Wall, the sole remaining portion of the Second Temple. Photo courtesy of PxHere

SUNSET WEDNESDAY, JULY 29: Three weeks of reflection prepare men and women for this, the saddest day in the Jewish calendar: the Ninth of Av, known as Tisha B’Av. (In 2020, The Three Weeks began on July 9.) Observant Jews who are healthy enough to undertake the 25-hour fast will follow five traditional prohibitions: No eating or drinking; no bathing; no use of creams or oils; no leather shoes; no marital relations. The final meal consumed before the start of the Tisha B’Av fast traditionally consists of a hard boiled egg and a piece of bread, dipped into ashes.

2020 update: This year, the coronavirus pandemic has impacted the rituals and traditions of many religious and secular holidays. According to this article from the Times of Israel, there may be extra exceptions this year in regards to fasting for Tisha B’Av.

The desolate tone of Tisha B’Av is in recollection of the tragedies that befell the Jewish people on the Ninth of Av—including, most prominently, the destruction of the First and Second Temples in Jerusalem. The ark—the cabinet where the Torah is kept, in the synagogue—is draped in black; the book of Lamentations may be read.

MOURNING AND GRIEF: ACROSS THE MILLENNIA

Today, the observance of Tisha B’Av gets mixed response, as modern-day Jewish families balance the demands of contemporary life with this call from the past.

Author Debra Darvick wrote in a column: “Tisha B’Av, a Jewish day of mourning that falls during the summer, marks the destruction of both the First and Second Temples in Jerusalem. … I have attended services sporadically, more out of a sense of responsibility than any feeling of true mourning. How do I mourn something absent from Jewish experience for nearly two millennia?” (Debra also wrote about the holiday for her book, This Jewish Life.)

9 AV: FROM THE FIRST TEMPLE TO THE FINAL SOLUTION