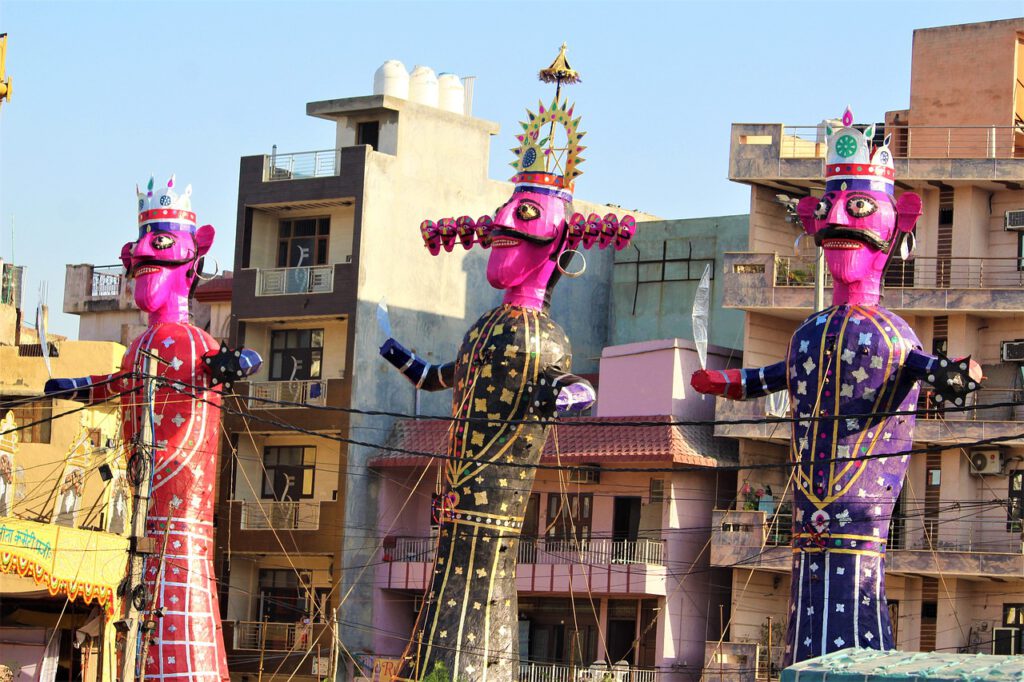 Celebrating Dussehra in the streets of India. Photo by Tanuj_handa, courtesy of Needpix.com

SUNDAY, OCTOBER 25: The festival of Navaratri—which began in India and in Hindu communities worldwide nine days ago, on October 17, this year—culminates in the most celebrated holiday of all nine nights: Dussehra, or Dasara (spellings vary).

News 2020: Just days before Navaratri began—on October 15—India underwent its fifth “unlock,” in light of the COVID-19 pandemic. For Navaratri and Dussehra, worshippers will be permitted to gather in temples—some of which have been closed since the lockdowns began. Religious functions may be held, with a limit of 100 people (outside of containment zones). The wearing of masks, social distancing, sanitizing and other health precautions will remain mandatory.

From the Sanskrit words for “remover of bad fate,” today’s Dussehra brings towering effigies to the streets of India, along with a host of ancient rituals and marked traditions. Many Hindus recognize the victory of Lord Rama over Ravana, a demon, during an epic battle over Rama’s wife, Sita. It’s believed that Ravana had 10 heads, and thus, 10 unfavorable qualities are rid from households with elaborate Yanga performances today; the unfavorable qualities include lust, anger, delusion, greed and jealousy.

In many parts of India, massive effigies of Ravana and his brothers are traditionally filled with firecrackers and exploded. The burning effigies are also seen as a cleansing ritual, as they encourage Hindus to burn inner evil and follow the path of righteousness. In northern India, it is custom that a chariot holding devotees costumed as Lord Rama and Sita rolls down the streets; in southern India, homes are decorated with lamps and flowers.

Did you know? Feminism shines in the victory of Goddess Durga over demons, thereby continuing the female-centered rituals of Navaratri. In rural areas of India and Nepal, it’s recognized that harvest season begins today.

Given the day’s auspiciousness, many Hindu (and non-Hindu) children begin their formal education today. (Note: Under to Unlock 5.0, India is now permitted to reopen schools. However, virtual learning is still emphasized as the preference, and not all states are opening schools yet.) Some devotees purchase new work tools—whether books, computers or farming equipment—and still others pay respect to elders and request their blessings. Families and friends often gather for a feast.