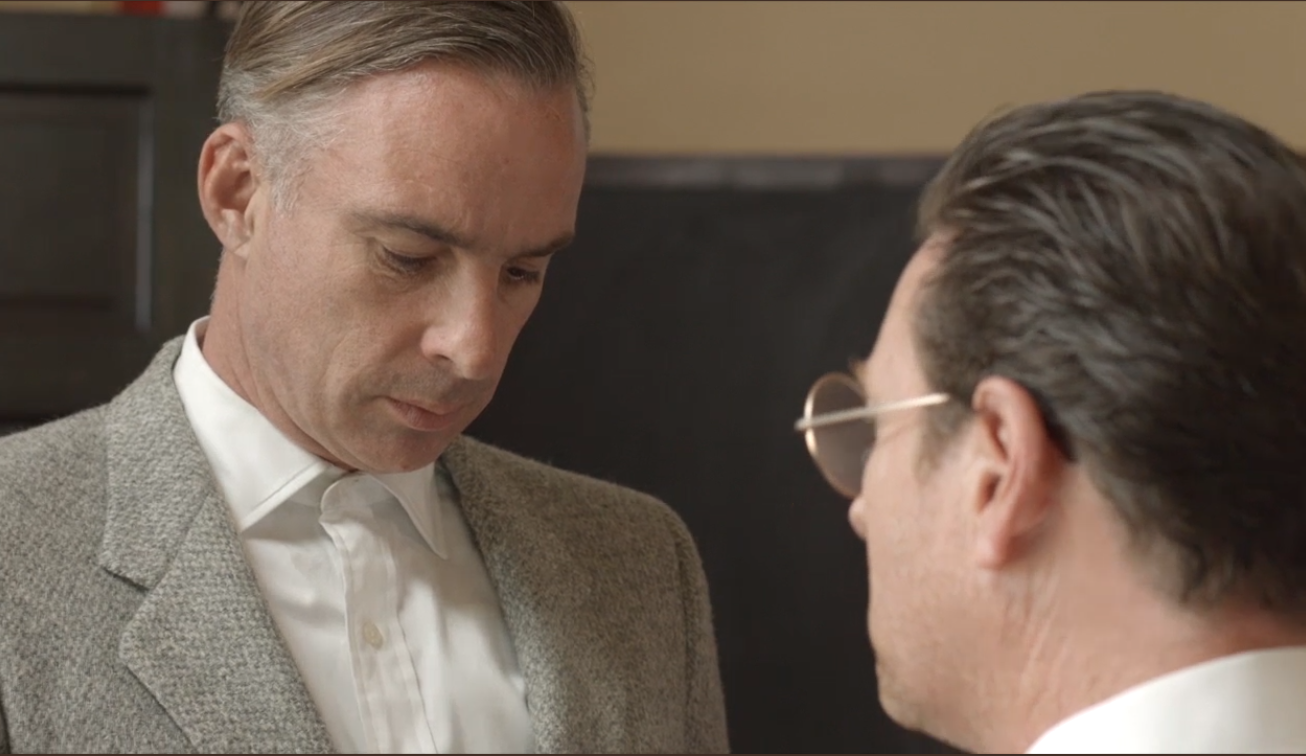 Rescue me, O my God, from the hand of the wicked, from the grasp of the unjust and cruel.


Is not this the fast that I choose: to loose the bonds of injustice, to undo the thongs of the yoke, to let the oppressed go free, and to break every yoke?

There have been numerous films about the martyred German theologian Dietrich Bonhoeffer, but Kevin Ekvall’s  2017 docudrama gives us an unusual take on him by pairing his story with that of a group of British purveyors of what can only be called in today’s parlance “fake news.” “WHAT?” you might ask does a theologian have to do with a journalist named Sefton Delmer heading up a team commissioned to broadcast anti-Hitler views and false stories to deceive the enemy?

The first, of course, is that both are dedicated to destroying Hitler, and both believed that deception was a legitimate weapon in the fight against evil. Delmer’s broadcasts are meant to mislead and confuse the enemy; Bonhoeffer poses as a member of the German Intelligence so that he could travel and transmit information about Hitler and the resistance to his contacts. A third tie-in is that of Otto John who had fled Germany and joined the “black propaganda” team as an adviser. He had been a long-time friend of the Bonhoeffer family and also a member of Operation Valkyrie, the plot on Hitler’s life. His brother also was a resister and would be executed along with Dietrich just before the War ended.

Two other members of the fake news team are Agnes Bernelle (Rebecca Summers), a German Jewish refugee who uses the name Vicki when she reads the “news” to her German listeners; and Ian Fleming (Scotty Ray), a British naval intelligence officer. Yes, that Ian Fleming who following the War would go on to thrill us with his super spy novels.

The film moves back and forth between the broadcasters, safe in England, and Dietrich Bonhoeffer (Gus Lynch) and friends as they are swept up in the Nazi net following the failed July 20 plot. We see Bonhoeffer alone in his cell writing his famous letters in which he speculates about God, faith and living in the modern world. He wrestles with the ethics of becoming involved in a plot that includes killing. By means of understanding ethics as situational and that standing by while evil reigned was to condone it, he decides to join those who risked their all in ending the war. Gas he writes, “It is only by living completely in this world that one learns to have faith.”

There is much made of the Allies’ insistence on “Unconditional Surrender,” a demand that discouraged any German who detested Hitler from actively opposing him. This statement appears on a black screen at the beginning of the movie, “One of the tragedies of World War was the refusal of President Roosevelt and Prime Minister Churchill to acknowledge the existence of a German resistance.” According to some, had those who knew about and supported the German resisters been able to convince the Allied leaders to be willing to meet with German resisters, the War might have been shortened. Contrary to the belief that Germans were monolithically united behind Hitler, a large number of professional officers in the army as well as in the civil service despised Hitler and thought he was ruining their country.

The tragic last days of Bonhoeffer are well told, especially the scene on the Sunday after Easter in which his companions (including a nephew of Russian leader Molotov Wassilli Korkorin; British Captain Payne Best and some women and children) convince him to hold a worship service—he did not want to impose “church” upon nonbelievers. One of the texts for that Sunday was the great Suffering Servant passage from Isaiah 53, and as pastor, he assured them that God was present with them. Soon the gestapo agent comes to conduct him to the gallows, Bonhoeffer speaking last to Capt. Payne, asking him to take a message to his English friend Bishop Bell, his final words being, “This is for me the end, the beginning of life.” He is then taken out, stripped naked (we see only his head and feet) and hanged. Concluding with notes about the post war fate of the survivors and the legacy of Bonhoeffer, the film serves as an inspiration for those facing evil today, as well as a tribute to the courage of those in the film.

The cast does well in their assigned roles, especially Gus Lynch as the martyred Bonhoeffer. Interspersed throughout the dramatized scenes are remarks from nine experts on the life of the martyr and the resistance to which he belonged. All having authored books on the subject, they were interviewed in England, the Continent, and in the USA. The two best known of them are Eberhard George Weddell, a godson of Bonhoeffer whose family had to flee Germany and settle in England, and Prof. Larry Rasmussen, Reinhold Niebuhr Professor Emeritus of Social Ethics at Union Theological Seminary in New York City.

If you have even a slight interest in Bonhoeffer, you will find this an informative and inspiring addition to your resources on the martyr and the German Resistance. It is easily available for free on YouTube or, if you want to escape the ads, on Amazon Prime. Or you can purchase the DVD by clicking on Come Before Winter Movie.

A dramatized documentary pairing the story of a UK propaganda team with that of theologian Dietrich Bonhoeffer & his friends prior to the latter's execution.
Editor Rating ★★★★★4 out of 5
More Details