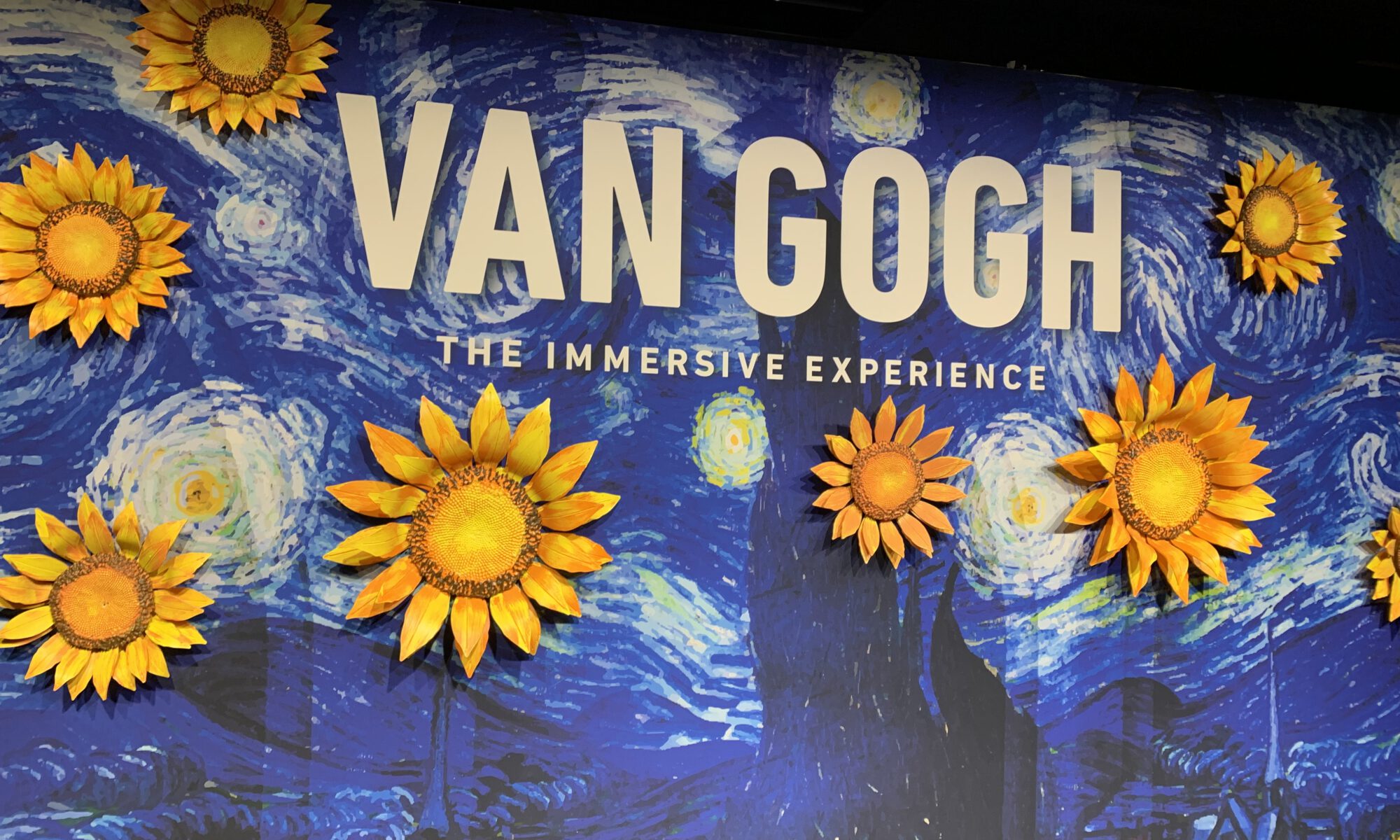 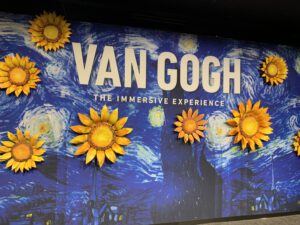 VAN GOGH: The Immersive Exhibition is wowing audiences in 14 cities across America, as well is in several cities in Europe, Mexico, the Middle East and Asia. If you are not a van Gogh lover before going through this incredible display, you will be afterward, so emotional is its impact, due to the creative merging of visuals, occasional narration (using the artist’s own words), and music.

After viewing numerous paintings—some not at all familiar— in several rooms and reading/listening to vast amounts of information on the artist and his times, we climbed to a second level (even the walls and stair railings were decorated van Gogh style) and entered a large wall equipped with benches, floor mats and lawn chairs. For a half-hour or so we were treated to a slowly swirling montage 360 degree projection of his art that delighted the eye and soul. Click onto the link in the first sentence to see a bit of the presentation.

There’s also a virtual tour through the Arles countryside where van Gogh wandered and painted. As you float along a cobblestone road you see in 3-D both the scenes that inspired the artist and then the paintings that resulted. They charge you an extra $5 for this, but, believe me, it is worth every penny!

Throughout the first part of the exhibit there are links on the walls so that you can download a van Gogh app and receive even more information than contained on the wall panels. You learn about the artist and his family (including his three relatively unknown (to me at least) sisters, his career, and several paintings that are not as familiar (understandable, as I learned that he painted 2000 works during his brief career–sketches, which he called “the seeds of his paintings.” and over 800 paintings There is a very interesting video in which experts analyze his use of color and conclude that he painted the world as he was able to see it. All in all, this is a trip into beauty that I urge you not to miss if you can possible get to one of the 17 cities where it is showing.

The exhibit makes me recall the numerous van Gogh films I have seen, all but one which I have reviewed. The films for which reviews are available have links embedded in the title so that you can go and read the whole review.

I have not reviewed this Vincente Minnelli-directed film, but want to begin with it anyway, because it made a deep impression on me when it came out during my sophomore year in college. I had seen several of the paintings because they were part of the collection at what then was called The John Herron Art Institute. Immediately drawn by the artist’s vibrant colors, bold outlines and thick laying on of paint that gave each painting a “feeling” you could sense without touching, I was mesmerized by the film and soon read Irving Sloan’s book upon which it is based. Much was made at the time of the director’s use of many of the original paintings garnered from museums all over the world, including the John Herron.

The Technicolor glowing colors beautifully captured the glory of the paintings, and the dramatic skills of Kirk Douglas as van Gogh and Anthony Quinn as Gauguin conveyed the passionate drama of the characters’ lives. I especially appreciated the film’s depiction of van Gogh’s sympathy for the “least of these,” begun during his unsuccessful mission work among coal miners in Belgium. His giving up of his comfortable lodgings to live in the poverty of the miners was criticized by church authorities as undignified to the profession of ministry, and he was soon back with his disapproving father. It was brother Theo who suggested that he pursue art as a career—van Gogh had made numerous sketches of the miners and peasants while living among them. Thus, as the film moves on to the artist’s later life, we see him become even more of an outsider to society than the poor with whom he had identified, very much in the tradition of Jesus and the prophets.

One of my favorite filmmakers, Robert Altman places the relationship of the two brothers at the center of his plot, so we see as much of Theodore as we do Vincent, and almost as much of Theo’s wife Johanna ter Steege, who after the brothers’ deaths was crucial in bringing her brother-in-law to the attention of the public.

I just learned that this film is a condensed version of a four-part miniseries and that the uncut version is available on Freevie.

The film, directed and co-edited by Julian Schnabel, dramatizes the controversial theory put forward by van Gogh biographers Steven Naifeh and Gregory White Smith, in which they speculate that van Gogh’s death was caused by mischief rather than suicide. Willem DaFoe

It is unlike any other animated film you have seen, being the work of about one hundred artists in Poland and Greece painting in oils the 65,000+ frames that make up the film. The film’s co-directors, the husband-wife team of Dorota Kobiela and Hugh Welchman, worked with a cast of actors shot against green background, whom they worked into the paintings with computer magic. The film took seven years to make it, so I doubt that you will ever see such a work again.

The slight quest/mystery story, taking place about a year after van Gogh’s death, serves as a framework for the scenes involving the artist. It is about Armand Roulin (Douglas Booth), son of the Postman Joseph Roulin (Chris O’Dowd), ordered by his father to deliver a letter Vincent had written to his brother Theo. Unfortunately, Theo also has died, and Armand does not have the address of his widow. He is upset when his father insists that he track down the artist’s friends so that the letter can at last be delivered to someone worthy of it. As the story develops we learn more about the artist.

Although my review of Japanese filmmaker Akira Kurosawa is long lost, I want to mention it because one of its 8 parts, based on the filmmaker’s own dreams, is called “Crows” based on the painting Wheat Field with Crows. It depicts an art student who meets Vincent van Gogh and enters the world of his paintings. Martin Scorcese, an admirer and champion of Kurosawa, plays van Gogh.

One of the most popular episodes of the British sci-fi series follows Dr. Who and his companion Amy Pond traveling in time back to 1890 where they encounter the artist and engage in a fight against a murderous monster. To bolster the depressed artist’s spirits they conduct him forward in time when he can see at the  Musée d’Orsay a display of his art and hear the curator praise him as the greatest artist of all time.

There are many excerpts on YouTube of Dr. Who and Amy taking Vincent to the art museum , my favorites being these two:

Don McLean’s haunting musical tribute to van Gogh can be heard on YouTube, my favorite being this one illustrated with the artist’s paintings as background to the lyrics. It would make for appropriate listening as you read some of the above reviews.