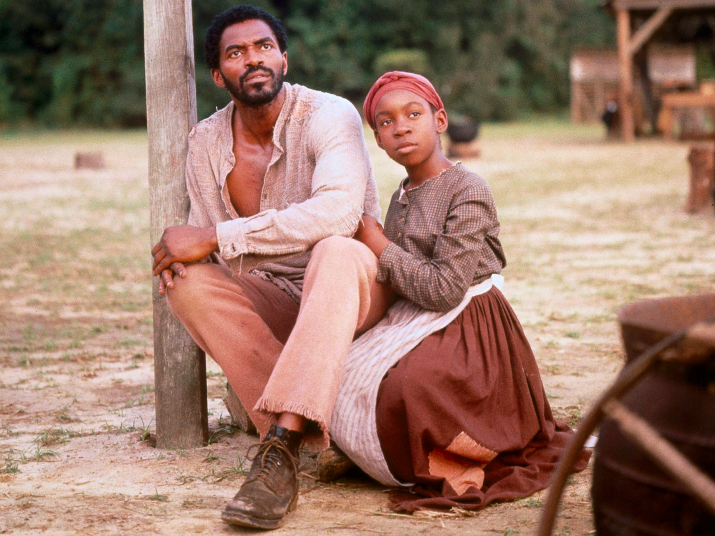 Then Moses and the Israelites sang this song to the Lord:

“I will sing to the Lord, for he has triumphed gloriously;
horse and rider he has thrown into the sea.
The Lord is my strength and my might,
and he has become my salvation;
this is my God, and I will praise him,
my father’s God, and I will exalt him.


and you will know the truth, and the truth will make you free.”

Director/writer Charles Burnett’s adaptation of Gary Paulsen’s award-winning young-adult novel about slavery and literacy is a fine tribute to the freeing power of the latter. Although first aired in 1996 on the Disney Chanel, this is no sanitized view of slavery, but one that fully exposes the brutality required to keep a people in bondage.  Scriptwriter Bill Cain pulls no punches. (Fans of the ABC series “Nothing Sacred” will recognize him as the creator of that Peabody Award-winning program.)

Some time before the Civil War, on a Southern plantation twelve-year-old Sarny (Allison Jones) is an orphan cared for by Delie (Lorraine Toussaint). Her enclosed world is opened up when the newly purchased John (Carl Lumbly) is bought by Clel Waller (Beau Bridges) to work in the fields of his plantation. Little does the white slave owner know that he has brought a subversive into his slave pen, a liberator who will pass on the torch of freedom to those being kept in ignorant bondage. We learn that John had been a free Negro who has voluntarily returned to slavery in order to teach others how to read. Harriet Tubman returned South many times to free the bodies of slaves; John has returned to free their minds and hearts.

Sarny herself narrates the story, thus providing the children of a viewing family the vehicle for entering the film. Up until Nightjohn’s arrival Sarny’s chief duties had been serving her owners at table, spitting tobacco juice on roses to prevent bugs, and secretly carrying love notes between Waller’s wife, Callie (Kathleen York), and Dr. Chamberlaine (Tom Nowicki) who lives nearby. In exchange for pinches of tobacco Nightjohn teaches Sarny the alphabet. He assures her, “Words are freedom. Slavery is made of words laws, deeds and passes. You get some words for yourself and you be free,”

But as soon as she traces a letter in the dust, he warns her, she is to erase it. One cannot be too careful. It is against the law for a slave to read, both teacher and learner punished severely when caught. One of the other slaves called Old Man (Bill Cobbs) testifies to that, having suffered  his thumb and forefinger to be chopped off as punishment. As Sarny observes, “White folks got all the words, and they mean to keep them.”

Sarny is baptized, and with her new ability, she is able to read a line from the 23rd Psalm from the Bible belonging to Master Waller’s son Jeffry that she steals from the library.  Most important, she learns that the pastor’s sermons, which often emphasize the apostle Paul’s admonition to be submissive are lies. She has read the passage upon which the hymn they sing in church is based, Exodus 15, “I Will Sing Unto the Lord (Horse and Rider).” To her it is a revelation. She declares, “God, he on the side of the slave!” What a glorious moment of liberation for a slave to discover! She also uses her newfound ability to read and write to forge a pass for the slave Outlaw (Gabriel Casseus) to be able to travel to visit his lover Egypt (Monica Ford) who is enslaved on another plantation. The stolen Bible serves as a symbol of freedom in a further way—Sarny uses a blank endpaper from it for the paper on which to write the pass. On another occasion she is thrilled to read in the big house an account of Nat Turner’s Rebellion.

The story becomes dark when John is found out, and then when Clel discovers the stolen Bible and tries to learn the identity of the thief, Sarny’s knowledge of the affair between the wife and lover, thanks to her ability to read their correspondence, saves her from the fate of Old Man. I should also mention that when Clel threatens to kill the slaves if they do not give over the name of the Bible thief, Sarny responds that he will not dare to do so. She has read through his accounts, learning the money value of each slave, and also knows that all his wealth is invested in them and the land. Without his slaves to work the land, it would be worthless.

However Sarny is not safe from being sold, because she now is regarded as a troublesome slave. For her there is no running away to the North, as Outlaw and Egypt had done, but nonetheless, there is a measure of victory. I think you will enjoy the last scene in which she takes up the mantle of John as she is taken away with a new batch of slaves. She may be in chains, but like Nightjohn, her heart and mind are free, and this makes her a dangerous slave wherever she winds up. For her Jesus’s statement about the truth that makes one free is contained in the revelation gained from being able to read the Bible for herself: “God is on the side of the slaves!” If, like me, you missed this inspiring film when it opened, there is still time to watch it on Amazon Prime.

Before the Civil War a Black man who voluntarily returns to slavery to teach slaves how to read finds an eager pupil in a young girl.
Editor Rating ★★★★★5 out of 5
More Details