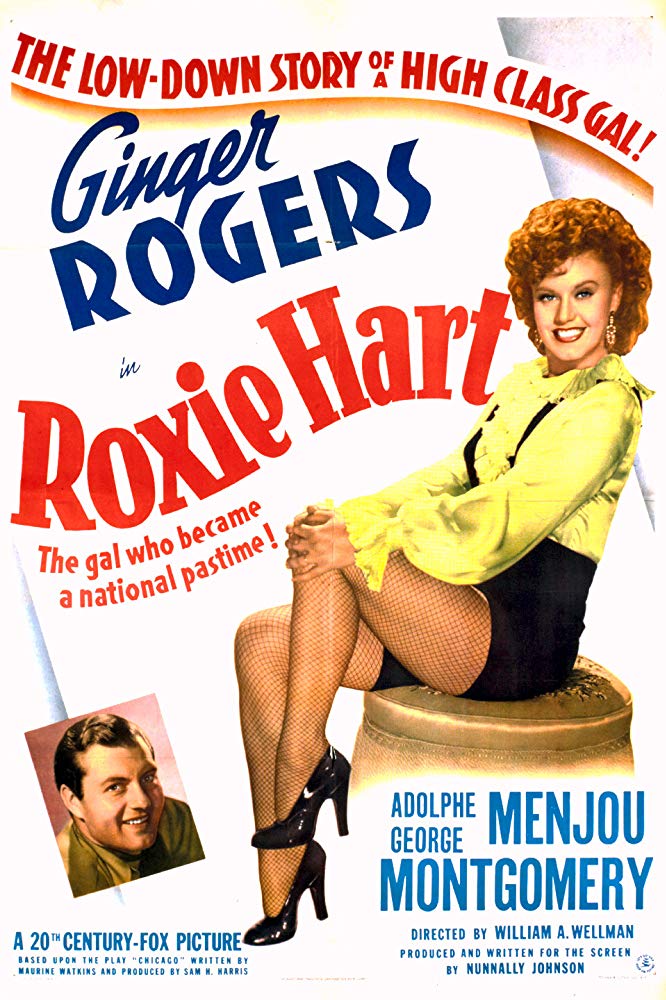 This is the second film that reading the book HE HAD IT COMING inspired me to look up. The book, reviewed in the April issue of VP, tells the fascinating story of women who shot their lovers in Chicago during the Jazz Age and how a woman reporter mined their stories for her hit play CHICAGO, which inspired ROXIE HART, and then the musical play and film CHICAGO. The movie is available free in a crisp version on YouTube. 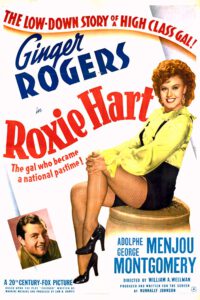 Ginger Rogers stars in director William A Wellman’s winning 1942 satirical comedy, with the acclaimed writer Nunnally Johnson (highest paid in Hollywood) adapting Maurine Dallas Watkins play. Based on real life Beulah Annan, the story is told years later by mustached reporter Homer Howard (George Montgomery) waiting with a younger reporter for his ride one night in a bar. He relates to the fascinated bar tender (William Frawley, who also plays the jury foreman) and fellow patrons how Roxie Hart’s husband Amos (George Chandler) is taking the blame for the killing of the dead man in his apartment while Roxie hides from the police on the rooftop. However, reporter  Jake Callahan (Lynne Overman), unlike the cops, is not taken in by the story, so when the police and Amos move to another room, Jake lingers behind and catches Roxie climbing back through the window. When the cops return he hides Roxie in the closet, and afterwards convinces her that if she confesses to the killing, she will gain the fame that will launch her on the show business career she had always wanted. He calms her fears by telling her that no woman has ever been hung in Chicago, and that he knows just the right lawyer who will get her off. As she is arrested she poses for the pictures that will show off her show biz legs.

Agreeing, she lands in jail where famous lawyer Billy Flynn (Adolphe Menjou) at last agrees to take her case even though Amos cannot gather all of the $5000 he usually demands. It is at the jail that cub reporter Homer encounters and falls in love with her, even though at first she barely notices him. Another of the reporters is gossip columnist Mary Sunshine (Spring Byington), a fictionalized version of Hedda Hopper or Luella Parsons. Dubbed as a “sob sister,” her job was to report (or make up) the personal details of the defendant,

Betty Grable is delightful as the opportunistic show girl who is constantly chewing gum and ready with a swift comeback. The wily Billy arranges a series of interviews for her, she dancing for the eager men her “The Black Hula.” She becomes the darling of the press, and agrees to Billy’s suggestion that she divorce Amos. Soon another woman is displacing Roxie. When the notorious robber “Two-Gun” Gertie Baxter (Iris Adrian) is caught and brought to the jail, the reporters desert Roxie and chase after the newest sensation.

Roxie’s bight future also becomes clouded when editorial writers start suggesting that the law has been too lenient on female killers, and it looks like she might be convicted. Fortunately, Homer has been told by the apartment house janitor that it was Amos who killed the man because he was Roxie’s lover. But, when he testifies at the trial on her behalf, his testimony is ruled as hearsay because the janitor has died. It will be up to Roxie to scheme how to win and milk the jury’s sympathy, and what a plan it is. She somehow convinces a doctor to agree that she is pregnant. How could any court convict and hang a young mother. The press is back with her, as is the jury, Billy Flynn milking her story for all that it is worth.

The trial is a delight to watch, with Roxie dressing in eye-catching dresses, and frequently when sitting with her shapely legs crossed, pulling up her skirt to reveal her knees. The press interrupt quite a few times to take her picture, and every time the judge makes sure that he is in the picture too. (Comedian Phil Silvers, dressed in knickers like a Hollywood cameraman, is one of them.) All twelve members of the jury lean over in unison to catch a better view of Roxie’s lovely legs. The foreman becomes so enamored with her that he will become a rival to Homer for her hand in marriage

Making Roxie innocent of the murder of her lover was probably a matter of complying with the Hayes Code that insisted that “Crime Must Not Pay,” so that some of the cynicism and satire of the play is muted, but the caustic emphasis that fame is fleeting, with the press and the public so fickle, is certainly maintained. Roxie discovers this again when she is acquitted and then quickly left alone by the press for an even hotter subject. And the ending of the film back at the bar with Homer and his rapt audience is a funny surprise even though it sells out the play’s conclusion. It reveals that Roxie’s dream of a carrer on the stage has faded along with the now distant headlines about her. Indeed, the ending is ironic in that her present estate could be considered as a form of punishment, if not quite as harsh as a life sentence in prison.

Based on the 1926 play CHICAGO, this is the satirical story of how a brash lawyer got a wannabe married dancer freed of the charge of murdering her lover, the lesson being how fickle the press & public are.
Editor Rating ★★★★★4 out of 5
More Details