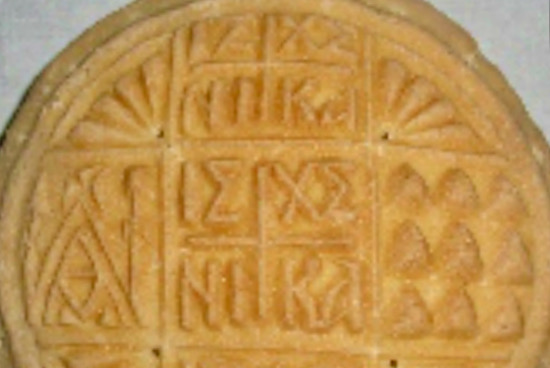 EDITOR’s NOTE: Our regular Holidays & Festivals columnist Stephanie Fenton writes about the global diversity of interest in Mary, the mother of Jesus in her column about the Assumption or Dormition of Mary. In addition, from his current base in the Middle East, Kevin Vollrath sends us this column about a local custom of symbolic (and delicious) bread baked for the Dormition. Here is Kevin’s story … 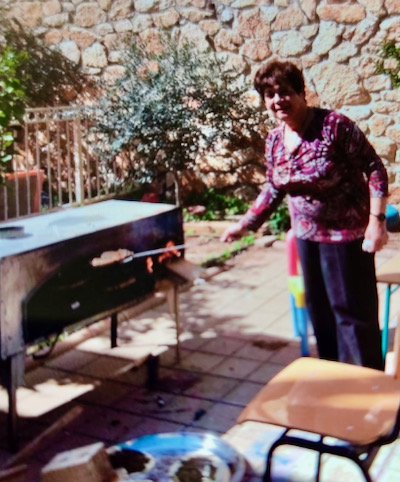 Naila Libbis, a Palestinian Greek Orthodox believer who lives near Nazareth and bakes her bread in an outdoor oven at her home.

MARY is venerated by Christians today in a wide array of traditions that have evolved and spread around the world since the earliest centuries of the faith. One tradition is a molded bread that the faithful can smell baking this week—and, if they are lucky, can taste—in Orthodox neighborhoods of the Middle East.

For millions of Christians around the world, of course, Mary is a beloved part of nearly every season of the year—and images of her are displayed in homes and gardens. In Orthodox and Catholic churches, Mary has a number of feasts through the year, including her birth (September 8), the Presentation at the Temple (November 21), the Annunciation that Mary would become the mother of Jesus (March 25).

The Orthodox Feast of the Dormition of the Mother of God commemorates Mary’s death without suffering and then her bodily resurrection. It is analogous to the Assumption of Mary into Heaven, celebrated in many Western churches. Both are observed on August 15 for those using the contemporary calendar, and August 28 for those using the Julian Calendar.

While Mary is adored by millions of men, women and children around the world, her exact role in the faith differs across the many branches of Christianity. For centuries, Protestants have shied away from venerating Mary, cautious of equating her with God. Even Catholic pontiffs over the past century have publicly expressed a range of perspectives on Mary’s role within the faith. For example, Pope Francis’s talks about Mary’s role in the Christian salvation story take a different approach than those by the earlier Pope John Paul II.

Where Eastern and Western branches of the church agree is that the events surrounding Mary’s death were miraculous. The Orthodox Feast of the Dormition celebrates her death without suffering as an indication of God’s faithfulness to God’s beloved.

This range in belief and custom evolved over the centuries partly because of the Bible’s lack of details about the end of Mary’s earthly life. A variety of sometimes conflicting accounts about Mary’s life and death emerged throughout the ancient Middle East.

One of the earliest traditions emerging in Bethlehem was that Mary began to pray at Jesus’s tomb, which annoyed Jesus’s critics. They asked her to stop. The story is described in the Oxford Early Christian Studies volume by Stephen Shoemaker, Ancient Traditions of the Virgin Mary’s Dormition and Assumption. As Shoemaker tells it: Mary moved from Jerusalem to Bethlehem, where she performed miracles and healings, inciting those critics to ask Roman soldiers to stop her. The Holy Spirit warned Mary and the apostles that soldiers were coming, and transported them to Jerusalem. The critics found her in Jerusalem and attempted to burn her home. While being ministered to at her tomb in Gethsemane, Christ received Mary’s soul, and Mary’s body was taken into Paradise.

Other early accounts of Mary described by Shoemaker begin with an angel telling her of her impending death and giving her a palm from the Tree of Life. Mary returns home in Jerusalem to alert her family, and the apostles are transported to her, miraculously. After a night of preaching, Christ receives Mary’s soul and and gives it to Michael. Mary’s body is taken to the Mount of Olives, where the apostles await Christ’s return. Paul asks about the mysteries Jesus taught, and Jesus’s followers begin arguing about how to preach the gospel. Eventually, Christ returns, vindicates the Pauline Gospel, and takes Mary’s body to Paradise, where it is reunited to its soul.

Today, Palestinian Christians continue to celebrate Marian feast days throughout the year—including a regional custom of a specially flavored bread that is popular to this day in Bethlehem and other ancient Christian communities. 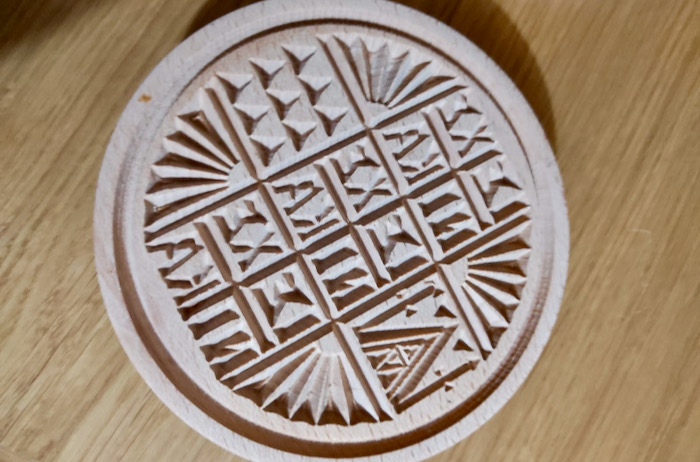 This kind of wooden mold forms the raised symbols on the finished round loaves.

A Symbolic Bread for the Feat

Many Greek Orthodox believers living in the region today still bake a symbolic bread unique to this feast.

The first recipe is enjoyed by families at home around the time of this annual festival. As Naila demonstrates this variety, she pours 1 kilo of flower into a big bowl, blending it with more than two cups of water, a big spoonful of yeast, a smaller spoonful of sugar and a bit of salt. She blends and kneads and lets the dough rise—working the dough until she reaches a consistency that she can form into round, flat loaves. Traditionally, these loaves were baked in a wood stove, but Naila and many other home bakers now use outdoor gas or electric stoves manufactured in the region.

Each year, she also makes a second spiced version of the bread that is used in her Orthodox church as the bread for this holiday Eucharist.

For this special bread, she starts with the same ingredients as her family loaves, but adds roughly twice as much sugar, then mixes in a big spoonful of mahlab as well as a smaller amount of mastic. Naila’s family has passed these customs down by word of mouth, judging the exact amounts by eye and the feel of the dough. She said she hopes that sharing her story may inspire other bread-makers around the world to experiment with this custom to help keep it alive.

If you are reading this story and want to try this mixture, you can Google a wide range of other Greek-inspired “breads with mahlab (or mahleb) and mastic.” If those ingredients are not available in stores near your home, they are available in various quantities via Amazon—as are Greek Orthodox circular stamps for holy breads. (One example of a stamp is listed here on Amazon, but there are many others listed on Amazon, as well.)