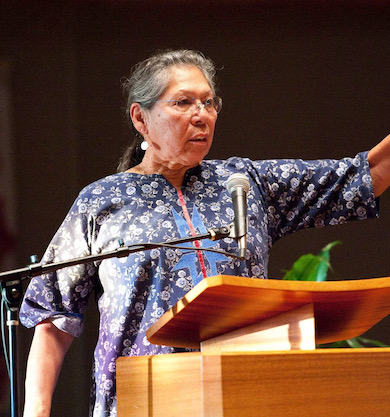 EDITOR’S NOTE: ReadTheSpirit magazine has been involved for many years in lifting up Native American voices. After our recent cover story about the launch of North American investigations into the legacy of Indian boarding schools, we have heard from many Indian readers and writers. This week, we chose this brief column to share from Madonna Thunder Hawk.

She has been active with the Lakota People’s Law Project, which was formed by grandmothers concerned about children who were still being removed from families by government officials as late as 2004.

Here is the message she sent:

The Intergenerational Trauma We Live With

There’s a lot of justified anger and trauma in Indian Country right now. For many of us, the reality of what happened in these horrific church-run and state-sanctioned facilities is not something we want to relive. That said, because I was there, I want to share with you some of what my experience looked like.

By the time I went to boarding school in the late 1940s and early ‘50s, things weren’t as horrifying as they’d once been. I spent a period of these years in the U.S. government and parochial boarding school systems on and off the Cheyenne River reservation. It may not surprise you to learn that I was always on the verge of getting kicked out. They said I was “too mouthy!”

My parents’ generation had it much harder. In their day, boarding schools were military in style and very strict. In the late 1920s and early ‘30s, my mother attended Pipestone Elementary. It was a U.S. government school, but many like it were parochial, mainly Catholic. She and her classmates were made to wear uniforms and march wherever they went. Neither crying nor laughing was allowed. No one talked, and many tried to escape, but they would always be found and brought back against their will. Then the administrators would shave their heads bald, march them into the auditorium, string them up and flog them. All the other kids were made to watch as a lesson in what happens when you run away. It shouldn’t surprise anyone that many children died from illness under these harsh conditions.

This is the intergenerational trauma that I and so many of my contemporaries still live with today. It informs our current fight to keep our young ones from being stolen away into white foster “care.”

It’s why we, as an organization, support U.S. Interior Secretary Haaland’s investigation, and why we hope even more will be done to empower a true reckoning here in the U.S.— through an audit of our own school properties and teaching real history in the schools of today. There is much that our past can show, if everyone will stop turning away from the truth.

Wopila tanka—thank you for your understanding and allyship at this hard moment.

Madonna Thunder Hawk, a member of the Oohenumpa band of the Cheyenne River Sioux Tribe, has a long history of grassroots activism prior to her formative work for LPLP as a Tribal Liaison. She is co-founder of Women of All Red Nations (WARN), as well as the Black Hills Alliance—which prevented corporate uranium mining in the Black Hills and proved the high level of radiation in Pine Ridge reservation’s water supply. She was a member of the American Indian Movement (AIM) and occupied Alcatraz and Wounded Knee in protest of the federal government’s genocidal policies against Native Americans. She spent months camped in Standing Rock to oppose the Dakota Access pipeline and protect clean water and treaty rights. Her work with LPLP builds alliances and support for Indian child welfare among South Dakota’s tribal leaders and communities. She is a grandmother to a generation of Native American activists.