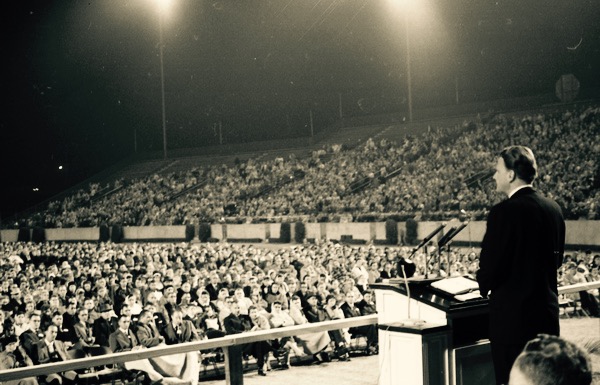 As a journalist, specializing in religion and diversity for more than 40 years, I’ve reported my share of stories about the Graham family. Since his death at age 99 on February 21, I have mourned Billy’s passing. As I read the coverage of his life by my colleagues nationwide, I was struck by one thought: Billy’s legacy would look a brighter if his son Franklin Graham hadn’t doubled-down on the family’s earliest bigotry. As a journalist steeped in this history, I am convinced that Billy’s lifelong awakening to God’s calling could have led him eventually to even more dramatic acts of inclusion. Now, instead, Billy’s life is tarred by the tragic expressions of contempt for others that continue to flow from Franklin.

In this past week, a wonderfully evocative reflection on Billy’s life by Jonathan Merritt in the New York Times touches on this long-awakening process in Billy’s life. The flip side, also in the Times, is this assault on what the Graham family represents today by David Hollinger. I find myself agreeing with arguments in both pieces—one fondly recalling Billy, the other a scathing indictment of where Billy allowed Franklin to carry his legacy. (The best Times piece, by the way, was Laurie Goodstein’s official Times obituary.)

So, what can ReadTheSpirit add to the broad river of coverage that poured from the Times this week? We can add a specific salute to one chapter of Billy’s life when he got it right and embraced integration. Hollinger dismisses this daring action as mere showboating—in light of how the Graham family later struck a hard line against other forms of inclusion. But Hollinger isn’t being fair to the light that seems to have erupted in Billy’s consciousness in the 1950s. What he did in that era truly was courageous.

How courageous? As the Religion Writer for The Detroit Free Press for several decades, I saw first hand the archival materials from the civil war in the 1950s for the soul of the powerful evangelical communities in Detroit. At that time, the city was an internationally famous industrial hub, teeming with families who had come to its factories from the American South and from nations around the world.

By the 1950s, Detroit already had been a virulent hotbed of Ku Klux Klan activism for several decades—and many of the most loathsome firebrands in that movement were associated with large white Baptist churches. Meanwhile, a growing number of large black Baptist churches were emerging across the city. At the moment when Billy decided to “take down the ropes of segregation,” as his organization now describes that chapter in his history, Detroit’s deep racial divide was mirrored in the correspondence that was flooding Billy’s office. Powerful white preachers from Detroit were pushing him in one direction. Detroit’s black pastors were pushing back. Some of those letters remain in the archives.

Billy’s courageous decision to do the right thing and side with inclusion came in the midst of what he clearly understood was a civil war on the verge of open violence. In the face of that threat, Billy first took down the ropes and later welcomed Dr. Martin Luther King Jr. to appear with him in New York City.

Today, as we remember Billy, we need not dwell on where Franklin is taking that legacy, except to suggest that Franklin should take to heart this father’s preaching (in this first video clip, below):

TAKING DOWN THE ROPES OF RACISM

You’ll find lots of books celebrating diversity and inclusion in our own ReadTheSpirit Bookstore and our new Front Edge Publishing Bookstore. Both are packed with inspiring writers who can help you find balance and solutions for the challenges you face in life.