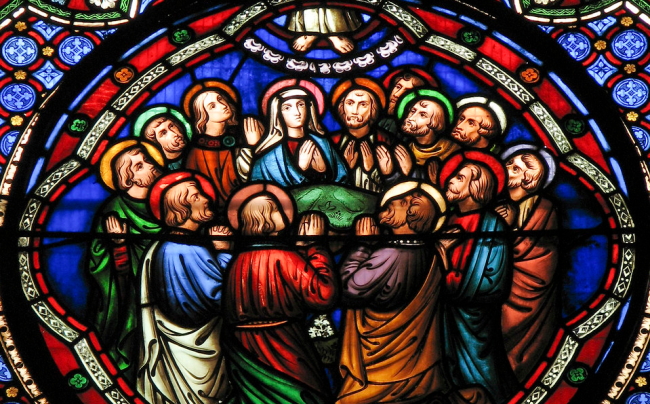 A stained-glass image of the Ascension of Jesus. Photo by Lawrence OP, courtesy of Flickr

THURSDAY, MAY 26: As Pentecost approaches, the Christian church observes a pivotal feast central to the faith since its earliest days: the Feast of the Ascension, known also as Ascension Day. On this date—or, as some Roman Catholic churches will hold services on the Sunday following, along with some regional Ecclesiastical provinces—Christians commemorate the bodily ascension of Jesus into Heaven. Each year, the Feast of the Ascension takes place on the 40th day after Easter. Though no documents give testament to the feast’s existence prior to the 5th century, St. Augustine referred to it as a universal observance of Apostolic origin.

Did you know? In Roman Catholicism, the Ascension of the Lord is ranked as a solemnity and is a Holy Day of Obligation; in the Anglican Communion, Ascension Day is a Principal Feast.

MOUNT OF OLIVES & THE ASCENSION

On the 40th day after Jesus’s Resurrection, it’s believed that he gathered with his disciples on the Mount of Olives and blessed them there. Jesus asked them to wait for the fulfillment of the promise of the Holy Spirit, to be witnesses and to “make disciples of all nations.” Jesus then ascended into Heaven, when, according to the story as recounted in Acts: Jesus was lifted up in a cloud.

The feast’s Latin term, ascensio, indicates the belief that Christ was raised up by his own powers. Traditionally, beans and fruits were blessed on this feast day, and the Paschal candle’s flame is quenched. In some churches, the Christ figure was lifted through an opening in the roof on the Feast of the Ascension.

Activities: It is customary to eat a type of bird on this day, to represent Christ’s “flight” to Heaven. As Jesus ascended from the Mount of Olives, it is also common—in hilly or mountainous areas—to picnic on a hilltop.

Note: In the Eastern Orthodox Christian church, the Feast of the Ascension of our Lord God and Savior Jesus Christ takes place on June 2, in accordance with 40 days after Pascha (Easter).