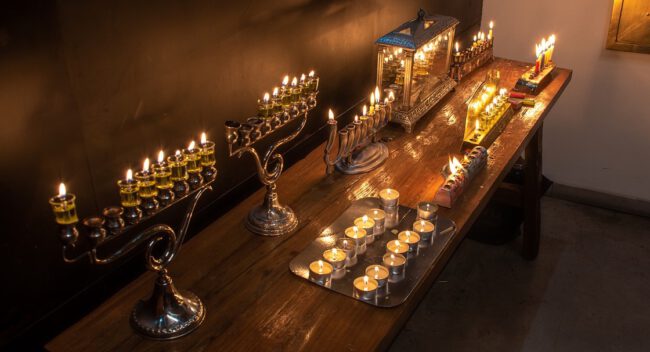 SUNSET THURSDAY, DECEMBER 10: Many world holiday traditions are being severely impacted by the coronavirus pandemic, but Hanukkah may be an exception—after all, much of the rituals are performed at home! While most synagogues will not be open for in-person services, families can still gather around a menorah, fry latkes in the kitchen and play a festive game of dreidel.

The first night of Hanukkah ushers in at sunset on December 10, this year, and lasts for eight consecutive nights and days. Though not as religiously significant as some other Jewish holidays—Yom Kippur, Sukkot or Passover, just to name a few—Hanukkah is widely celebrated, and is easily recognized even by non-Jews.

Each evening during Hanukkah, Jewish families light menorah candles in honor of the Maccabees’ victory over Antiochus IV Epiphanes and the Greeks, in the 2nd century BCE. As the traditional story is retold: Once the Second Temple had been reclaimed from the Greeks, purified and rededicated, there was only enough sacred oil found to burn for one day. Yet, miraculously, the oil burned for eight days. In celebration, Jews today partake in foods fried in oil, light candles, play traditional games and sing songs.

THE MENORAH & THE DREIDEL 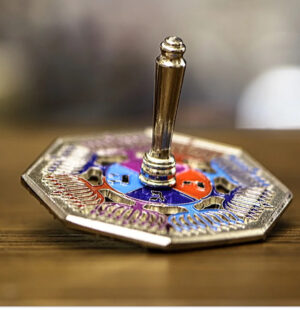 A dreidel. Photo courtesy of Pixabay

Hanukkah is faithfully observed by most Jews with the lighting of candles in a nine-branched menorah, with one candle for each of the eight nights and one extra candle (the shamash), which is often placed separately from the others. The shamash must be used for “practical” purposes, so that the remaining candles may be used solely for publicizing the miracle of the oil.

While a menorah lights up a window, a game of dreidel is often played. The four-sided spinning top that is the centerpiece of the game has a Hebrew letter imprinted on each of its sides. The letters are an acronym for “A great miracle happened there.” Candies, money or chocolate gelt (coins) are often wagered in a game of dreidel.

NOT CHRISTMAS: The 8-day Jewish festival of Hanukkah is not like Christmas, so far-flung Jewish relatives don’t rush home for these holidays, as many Christians do for Christmas. However, parents and their children often enjoy the rituals together, to establish this tradition for future generations.

“In 167 BC, Antiochus decreed the practice of Judaism to be an offense punishable by death. The Temple was desecrated, and the Syrians went so far as to sacrifice pigs in the Temple. A Jew named Mattathias and his five sons began a revolt not only against Antiochus, but against the Jews who were quite willing to take on the ways of the majority population and jettison Jewish practice. Three years later, the Maccabees (as the Jewish fighters were known) and their followers were victorious, and the Temple was once again in Jewish hands.”

Looking for ideas to decorate your home for Hanukkah? HGTV offers 50 “haute” decorating and entertaining ideas (even if you’re only entertaining your immediate family).

For something sweet, try baking a batch of dreidel sugar cookies. (Instructions are also included for royal-icing decoration.)

Turn up the elegance with 11 tips for a guest-impressing Hanukkah table setting (even if, this year, the only guest is your spouse.)