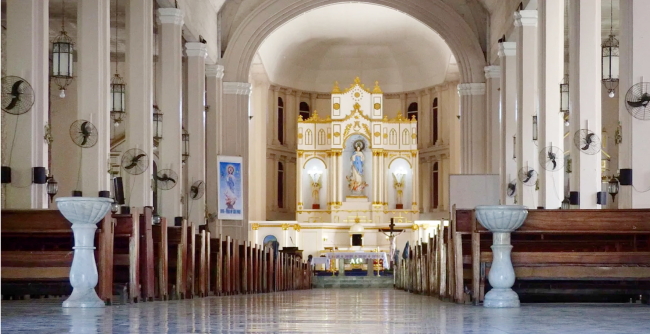 The Immaculate Conception Parish, in the Philippines. Photo courtesy of Raw Pixel

THURSDAY, DECEMBER 8: As Advent continues, Catholic Christians pause to focus on the Virgin Mary in the Solemnity of the Immaculate Conception, also called Immaculate Conception Day. Catholic dogma holds that the Virgin Mary was born via a sinless conception, and that she is without Original Sin. Around the world, this feast day is greeted with fireworks, processions and celebratory liturgies. 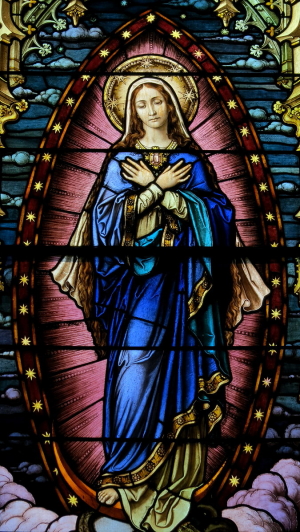 A stained-glass depiction of the Virgin Mary, located in Saint Mary of the Assumption Church in Ohio. Photo courtesy of Wikimedia Commons

The proclamation by Pope Pius IX, as Roman Catholic dogma, states that: “the most Blessed Virgin Mary, in the first instance of her conception, by a singular grace and privilege granted by Almighty God, in view of the merits of Jesus Christ, the Savior of the human race, was preserved free from all stain of original sin.” The statement is considered infallible.

Interested in learning more? National Catholic Register lists eight things to know about the Immaculate Conception, including details on Mary’s personal sinless nature and the meaning of “full of grace.”

A HISTORY: EAST AND WEST

A feast for the conception of Mary was being observed in the Eastern Christian Church as early as the fifth century, though the original title of the feast referred to Saint Anne and the Virgin Mary. Popularity of the feast increased in the seventh century, and the conception of Mary was being described as “immaculate” from the 11th century. Today, Orthodox Christians do not believe that Mary was free from original sin prior to birth, but rather that she is filled with grace. Following the Great Schism of 1054, some sects of Western Christianity embraced Mary’s sinless conception.

A Holy Day of Obligation, the Feast of the Immaculate Conception requires that all Catholics attend Mass for the occasion. (Learn more from Fish Eaters.) Mary is seen as a guide on the path to salvation; a beacon of hope in times of conflict and doubt.

A designated candle for Mary sits at the center of the table as the scent of freshly baked gingerbread Moravian Spritz wafts through the air: the Marian feast brings to mind the aromas of cinnamon and myrrh, as many believed that Mary emitted these sweet smells. Families or parishes honoring the feast may decorate in blue or with symbols of her purity, such as lilies or roses. For additional resources, prayers, recipes and children’s activity suggestions, visit Catholic Culture.