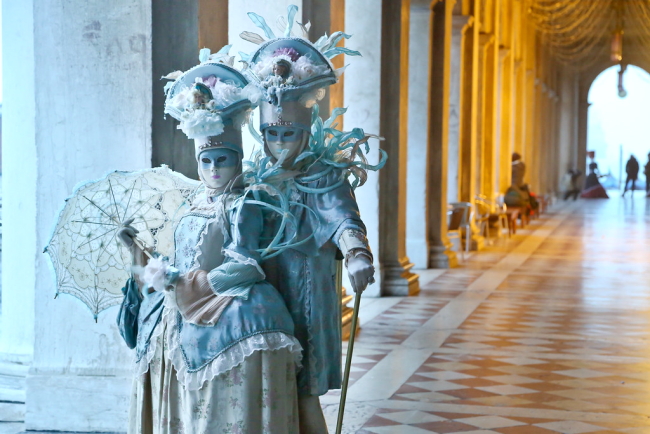 A couple dressed up for Carnivale, Venice, 2016. Photo by Y Nakanishi

TUESDAY, FEBRUARY 25 and WEDNESDAY, FEBRUARY 26: With Lent quickly approaching and Easter on the horizon, Western Christians enter the season of repentance on Ash Wednesday—after, of course, making any last indulgences the day before, on Fat Tuesday.

Traditionally an opportunity for Christian households to cleanse their cupboards of butter and eggs in preparation for Lent, Mardi Gras (literally, “Fat Tuesday) has evolved far beyond its simple, pancakes-and-paczkis roots. The food-laden traditions of Shrove Tuesday do still exist—in England, pancake races have been held continuously since the 15th century, and doughnut shops worldwide continue to bake millions of paczkis—but the elaborate festivities have morphed into mega-festivals across the globe. Whether it’s Carnival in Brazil, Carnevale in Italy or Mardi Gras in New Orleans, days-long events finally come to a close on Ash Wednesday, as Christians begin the 40 days of Lent.

Recipes! Shrimp gumbo, jambalaya and King Cake can be on your menu, with help from Food Network and Taste of Home.

CARNIVAL: FROM EPIPHANY TO FAT TUESDAY 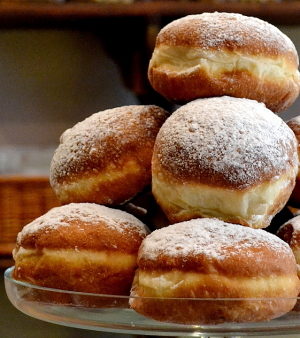 Epiphany—or King’s Day, on January 6— signals the official start of Carnival season. Montevideo, Uruguay, is the first city to kick off festivities for Carnival, in a celebration that lasts 40 days. In most cities, events begin one or two weeks prior to Fat Tuesday, with colorful parades, masquerade dress, festive music and, of course, plenty of sweet and fried breads. Whether it’s the Polish paczki, the English pancake or the Swedish semla, the tradition of using sugar, lard, butter and eggs on Fat Tuesday has as many cultural variations as nations that celebrate.

Did you know? In the Belgian city of Binche, the Mardi Gras festival is known as the Carnival of Binche. It was proclaimed one of the Masterpieces of the Oral and Intangible Heritage of Humanity by UNESCO, in 2003.

In the UK and Ireland, the week prior to Ash Wednesday is known as “Shrovetide,” ending on Shrove Tuesday and always involving pancakes. Shrove Tuesday is derived from the word shrive, which means, “to confess.” The Christian Mardi Gras began in Medieval Europe, although Venice remains one of the most sought-after destinations for the holiday. (CNN has a slideshow of the world’s most dazzling Mardi Gras celebrations.)

Did you know? “Carnival” derives from the Latin carne levare, which means, “to take away meat.”

Across the world, in Rio de Janeiro, Carnival has become such a massive event—so much so, in fact, that the country attracts 70 percent of its tourists during this time! Mardi Gras came to the United States in 1699, when French explorers Pierre and Jean-Baptiste Le Moyne were sent to defend France’s claim on the territory of Louisiane. Today, Mardi Gras reigns strong in New Orleans.

For Christians, Lent begins on February 26, with Ash Wednesday.

In representation of the 40 days that Jesus spent fasting in the desert, Christians observe the 40 days of Lent (excluding Sundays) in preparation for Easter. On Ash Wednesday, able adults fast, and all able Christians abstain from meat and practice repentance. Records indicate that from the earliest centuries, the days preceding Jesus Christ’s death were filled with a solemnity of fasting and penitence.The custom of clergy placing ashes upon the foreheads of the faithful is rooted in the practice of doing so as a sign of mourning and repentance to God.

On Ash Wednesday, Christians recall their mortality and express sorrow for sins. Traditionally, palm fronds from the previous year’s Palm Sunday are burned into ashes for Ash Wednesday services, and the ashes are then blessed. The Catholic Church permits ashes on the forehead for anyone who wishes to receive them—not just baptized Catholics. Generally, the practice of ashes is kept by Catholics, Lutherans, Methodists and Anglicans. In England and the UK, pancakes are overwhelmingly popular on Fat Tuesday. Photo courtesy of YouTube Easy Dessert Recipes

TUESDAY, FEBRUARY 9: Empty those cupboards and refrigerators and indulge in sweet paczkis, delicate crepes, spongy pancakes and even a King Cake—it’s Fat Tuesday, the last day before the start of Western Christian Lent. For centuries, Christians have gathered their supply of sugar, butter, eggs and other rich foods on Fat Tuesday, cooking up an array of tempting treats and clearing the home of these foods in anticipation of Lenten fasting. In England, pancakes are topped with fruits and creams, cooking herbs and other savory flavors; in Poland and Lithuania, fried donuts and paczkis are more common. Swedes and Finns cook up semla pastries, and in the United States—well, any number of these treats can be seen on Fat Tuesday.

RUN THOSE PANCAKES! In the United Kingdom, pancakes have been a part of Shrove Tuesday for so long that the day has all but been renamed “Pancake Day.” One of the longest-running pancake races has been held annually since 1445, in Olney at Buckinghamshire. One legend goes that a housewife was once so busy making pancakes that she lost track of time, and when she heard the church bells ringing, she ran out of the house still carrying her frying pan. Today in Olney, pancake race participants must carry a frying pan and toss pancakes along the race course. Similar traditions can be spotted across England, and most races are followed by a church service. FROM NEW ORLEANS: Nothing stops Mardi Gras, say NOLA residents and partygoers, and it’s a good thing, too—because, for the third year in a row, a cold and wet forecast sets the stage for Mardi Gras activities. Nonetheless, activity schedules and much more can be found at the official New Orleans Mardi Gras website.

A GLOBAL TASTE OF FAT TUESDAY: Staying home on Mardi Gras? Not to worry—an array of recipes from around the world can bring all of the day’s tastes to your table!

Check out celebrity chef recipes, alternative pancake recipes straight from London and a tantalizing combo of crepes and homemade nutella, recipe courtesy of The Guardian. For King Cake, Jambalaya and more Mardi Gras recipes, try something from Food Network or AllRecipes. A sweet semlor bun recipe is in the Irish Examiner.

ZIKA VIRUS IN RIO: Carnivale activities worldwide begin days and even weeks before the day itself, but in Rio this year, experts estimate that thousands may have canceled their plans due to the Zika virus scare. The 2014 World Cup in Brazil saw what is believed to be the first international exposure to the Zika virus, and to date, more than 1 million cases of Zika virus have been reported in Brazil. Researchers are working on a vaccine, though the epidemic will put a deep dent in numbers for both Carnivale 2016 and the upcoming summer Olympic games, which are to be held in Rio.