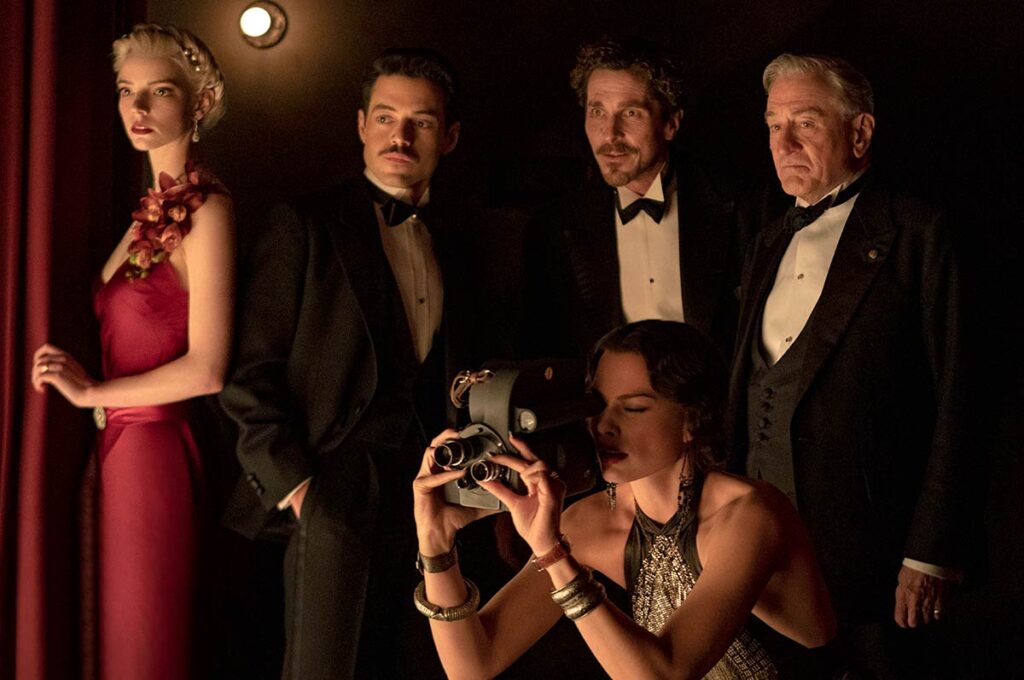 They lay crafty plans against your people;
they consult together against those you protect.
They say, “Come, let us wipe them out as a nation;
let the name of Israel be remembered no more.”
They conspire with one accord;
against you they make a covenant—

Director-screenwriter David O. Russell combines murder, inter-racial romances, a little madcap comedy, and a possible coup attempt by Fascists to take over the American government in this period piece that jumps back and forth between the early Thirties in New York and 1918 Belgium and Amsterdam. It sports a large cast of A-level actors that make about every minute a lot of fun to watch, though admittedly you might be momentarily confused keeping up with their names. If you have read one of the negative reviews, disregard them—I am astonished at how much some have missed in this delightful film that combines entertainment with social justice issues.

The film begins in New York in 1933 when buddies from WW 1, Dr. Burt Berendsen (Christian Bale) and attorney Harold Woodman (John David Washington), are tending to the needs of fellow veterans who have fallen on hard times. Berendsen is a doctor specializing in plastic surgery and Woodman is a lawyer, so the two work among the slums and streets of the city, the first providing medical care and prosthetic limbs, and the other legal assistance to the needy ex-soldiers.

We see in a long flashback to 1918 how the two had been brought together by General Bill Meekins (Ed Begley Jr. ) in France. The African American Woodman had been complaining about the racist treatment by an officer, and so the General had replaced the man with Berendsen, the two being members of the famed 369th regiment where they become fast friends, Berendsen serving as their medic. Although we see none of the bloody action of the trenches, we are shown its horrible results, both friends bleeding and scarred from the shrapnel of an artillery shell and sent to a Belgian field hospital with hundreds of other wounded men. The blast had also taken out one of Berendsen’s eyes. Here nurse Valerie Voze (Margot Robbie) tends to their wounds with her tweezers, dropping each fragment, not into a pan but a small box, apparently with the intention of saving the fragments. An amusing set piece is that in which a French cleric, Bible in hand, and two lackeys admonish her to stop saving the shrapnel, and the two soldiers join her in forcing the intruders to flee down the hallway.

Back in 1933’s New York General Meekins’ daughter Liz Meekins (Taylor Swift) contacts Berendsen and Woodman concerning the suspicious death of her father, the general who during WW 1 had brought Berendsen and Woodman together. She wants the autopsy that has been denied because she thinks her father has been murdered. This leads to another murder, with our two heroes accused of the killing. They flee, but do manage to conduct the autopsy with the help of morgue nurse Irma St. Clair (Zoe Saldana), and sure enough, Berendsen finds evidence of poisoning. The pair, Berendsen sporting a glass eye, enter into a series of escapades, dangerous but also often funny because of some of the bizarre characters involved. And that glass eye is constantly being knocked out by Berendsen’s being hit or falling down.

Although the bulk of the film takes place in America, a flashback lasting about a half hour justifies the name of the film. For our two heroes, led there by Voze, Amsterdam is almost a Utopia. For Berendsen because he is free from his unsympathetic socialite wife Beatrice (Andrea Riseborough) and her snobbish parents; the latter upset that their daughter married a half-Catholic/half-Jewish doctor. In bohemian Amsterdam Woodman is free from the racism of the States, so as he falls in love with Voze, there are no societal repercussions. Valerie Voze turns out to be a wealthy heiress-artist, her rooms strewn with paintings, prints, and mixed media works. This is why she had been saving the shrapnel and bullets, turning lethal bits into small life-affirming sculptures and mixed media pieces. The three revel in Amsterdam’s night life and events, forming a threesome comparable to the Three Musketeers. She introduces them to a master glass-eye craftsman named Paul Canterbury (Mike Myers), who’s also a British intelligent agent in partnership with Henry Norcross (Michael Shannon), an American agent. These two, always fun to watch, will be important later on in the convoluted plot back in America.

In 1933 Manhattan another pair of characters amusing to watch are the bumbling cops in pursuit of our heroes Detective Lem Getweiler ( Matthias Schoenaerts) and his not too bright partner Det. Hiltz (Alessandro Nivola). We also meet Valerie’s brother Tom Voze (Rami Malek) and his wife Libby (Anya Taylor-Joy), who treat Valerie like a mental patient. The latter has re-entered the picture after being left behind in Amsterdam by her two friends. Her brother and sister-in-law will turn out to be as sinister as they are quirky.

Also entering the film at last is Robert De Niro, who plays the dead Gen. Meekin’s good friend Army General Gil Dillenbeck. After many rebuffs because so many people are seeking his favor to suit their own ends, the General finally agrees to meet with them. When they arrive at the General’s house they discover a messenger with a bag of money sent by a group of wealthy businessmen who want the General to make a speech at an upcoming veteran’s reunion. The messenger will not reveal who sent him. After meeting with our trio first, the General agrees to make the speech, but it turns out not to be the one written for him.

The event is a gala one of veterans once under the General’s command. The microphones will carry his voice to his immediate audience and also to a nationwide one. General Dillenbeck meets three of the antisemitic industrialists and financiers who had provided the money and speech designed to rally an army behind the General. They admire Mussolini and Hitler and thus believe America needs a strong leader rather than “that cripple in the White House.” The fourth conspirator in on their plot, they reveal without naming him, is an inventive auto mogul, obviously meant to be the virulently Jew-hating Henry Ford.

From this point the film emulates Hitchcock’s The Man Who Knew Too Much,” with Dillenbeck delivering a speech that he has written. This is highly displeasing to those in his audience who have arrived in their brown shirts, the uniform of the American Bund, the real life group that pledged their allegiance to Hitler during the 30s. The Hitchcockian touch is the killer in the rafters poised to shoot the General—he is the same man who had committed the murder our heroes are falsely accused of. Will he succeed again?

This part of the film justifies the filmmakers beginning the film with “A lot of this actually happened.” There really was a “Business Plot” of wealthy Americans wanting to replace President Roosevelt with a dictator, and Gen. Smedley Butler was the man whose character Gen. Dillenbeck is based on. As in an earlier flashback in the film Gen. Dillenbeck did, so also Gen. Smedley showed up at the famous Soldiers Bonus March on Washington in 1932 and spoke to the veterans. The men were demanding that they be paid a promised bonus for their service because they were in such great need due to the Depression. And the wealthy plotters did try to ensnare Gen. Smedley in their plot with a promise of a huge army of veterans to back him. And he did make the speech seen and heard in the film exposing the plot—only it was to a Congressional Investigative Committee. At the end of the film during the credits there is a split screen showing de Niro giving that speech and alongside him the real General, their voices blending to show us that the scriptwriters had merely adapted the real speech for their film.

It is rare that a filmmaker can so skillfully mix comedy with social justice issues—I think of Spike Lee’s delightful Bamboozled—but David O. Russell ably does so in this film. He reminds us that protofascists coup attempts are not new, that groups like today’s Proud Boys have been foreshadowed by the shadowy group of wealthy Americans who tried to enlist Gen. Smedley in their plot –known as “The Business Plot”–to replace Pres. Roosevelt. As in the movie, there was no prosecution of the conspirators, their illegal acts fading into history. In the sequence of Gen. Dillenbeck’s speech look out for the brown shirted veterans standing as a group, members of the pro-Nazi American Bund that was growing in strength at that time. Their culmination in power is shown in the short (7 min.) film A Night at the Garden, when about 20,000 people attended a pro-Hitler rally at New York’s Madison Square Garden. If you watch this little documentary, you will see that the giant picture of George Washington that Russell uses in Amsterdam’s rally scene is a replica of the one actually used in the (later) Madison Square Garden Bund rally!

Russell’s film also reminds us that racism also long been an infection spoiling American society. The racism that confined African Americans to a segregated regiment and allowed only white officers to command them would continue in the Second World War as well, with such movies about the Tuskegee airmen as Red Tails and The Tuskegee Airman depicting the racism faced by African Americans during that period. America’s racism, which made Valerie and Berendsen’s love affair a dangerous one, was a prime reason for the two friends to linger so long in Amsterdam. It is a delight that later, when the latter is freed from his snobbish wife, that Berendsen too enters into such an affair with—well, I should let you discover her identity. I’ve already perhaps revealed too much, although I do want to mention that the film, in one brief scene, even reveals the practice of forced sterilization of “undesirables” that took place during the 1920s and 30s.

In light of the above, I think this film, written off by too man, is one that should be seen by as many movie lovers as possible. It is not only a lot of fun, but it is a movie that matters as well.

Though Amsterdam is a romantic comedy-thriller set in the 30s, it deals with racism & fascism, making it very relevant to today's fascists movement.
Editor Rating ★★★★★5 out of 5
More Details