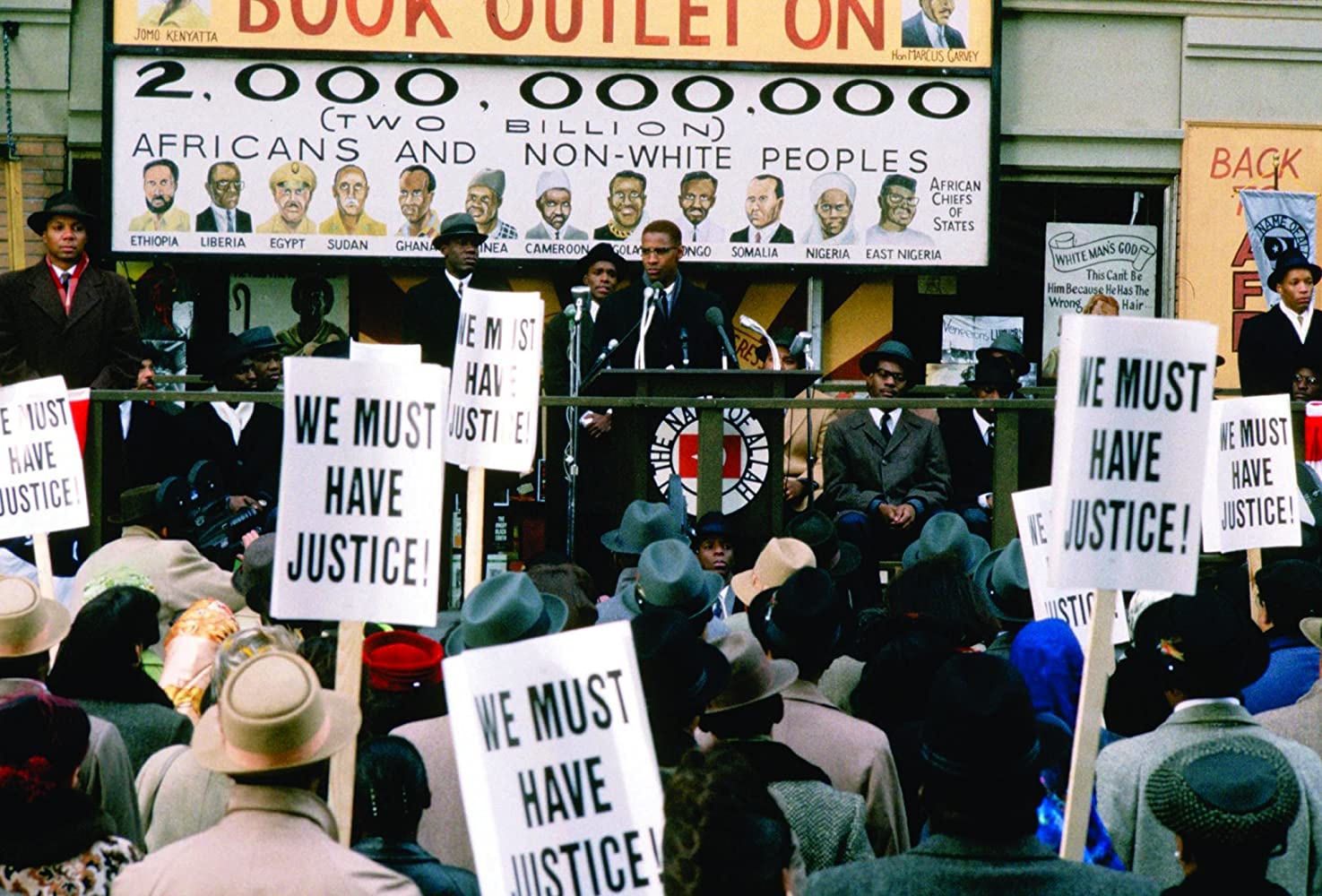 This review was written for the December 1992 issue of Visual Parables. I am bringing it up from the archives because of a new project highlighting ten films I believe every American white person needs to see in order to understand the currently debated  topics of systemic racism and white privilege. With a few minor exceptions, the text appears as originally printed, but the two Scripture passages and a set of questions for discussing the film are additions, the latter appearing in the July 2020 issue of VP..

We cried to the Lord, the God of our ancestors; the Lord heard our voice and saw our affliction, our toil, and our oppression.


"And what is the greatest single reason for this Christian church's failure? It is its failure to combat racism."

“And what is the greatest single reason for this Christian church’s failure? It is its failure to combat racism.”

The Autobiography of Malcolm X, p. 376

Just as John Singleton’s Boyz N the Hood was the 1991 film white Americans concerned about the future of this nation should see, so Spike Lee’s new epic is the one for this year. And at three hours, twenty-one minutes epic it is! For me the time sped by swiftly, especially after the first hour chronicling Malcolm Little’s life of crime and drugs. My main criticism is that spending so much time on this meant that Lee had to rush through the life transforming pilgrimage to Mecca. Without the book the viewer would not know how lavishly Malcolm X was received by Arab leaders, including Prince Feisal, and that he also visited several West African leaders, including President Nkrumah of Ghana.

The film is a powerful testimony to the failure of the white church and the resil­iency of the African American. Through skillfully intercut flashbacks Lee shows us the cruelty of whites, first toward Malcolm’s father, who is eventually murdered for his outspoken, unconventional views, and then his mother, as she is judged unfit by Michigan welfare authorities to keep her children. But perhaps cruelest of all is the scene in which we see what a supposedly beneficent school system does to the spirit of a “Negro boy:” the white teacher advises little Malcolm to forget about becoming a lawyer because his hands fit him better for carpentry!

The film simplifies Malcolm’s conversion to the Nation of Islam by having a fellow prisoner introduce him to Elijah Mohammed’s teachings. (Actually, it was his own brothers through their letters. Mohammed often stayed with one of the brothers when he visited Detroit.) Despite such liberties, the script includes many of the words and incidents from the book. Malcolm did have trouble bending his knees in prayer. He did revisit Archie in Boston where he found the man who introduced him to the numbers racket living in dire straits. And he did damage his eyesight by reading books after lights out in his cell.

There are generous doses of the newly named Malcolm X’s speeches, parts of which will, and should, make the white viewer wince with the pain of recognition of truth. Spike Lee makes certain that we know where his sympathy lies by juxtaposing scenes of Martin Luther King and his followers engaged in nonviolent demon­strations with Malcolm X addressing Northern audiences.

One of the most stirring scenes is the one in which the leader strides at the head of fifty members of the Fruit of Islam through the streets of Harlem after a brother is beaten and arrested by the police. For the first time someone rises up in protest against such treatment, so that a large crowd gathers behind the calmly arrayed lines of well-dressed and disci­plined men.  Inside the police station the white officers disdainfully refuse Malcolm’s demands,  until they follow his suggestion and look out the window. The huge crowd makes them realize they are dealing with a man with power. The clean-cut young men stand­ing proudly and calmly in the street are beautiful to behold; little wonder that the Nation of Islam’s teachings of black pride and self-reliance drew so many converts. Or that a white cop commented, “That’s too much power for one man to have.” Of course, he meant “black man.”

We can only speculate what Malcolm X might have accomplished following his break with Elijah Moham­med’s racism and his establishing his own mosque. In the script Lee apparently intended to balance the scene in which Malcolm cruelly rejects a sincere white coed who asks how she can help his cause with a second one in which he tells another coed to find other white people and teach nonviolence to white racists, but the latter one was cut. Malcolm never rejected violence in self-defense, rightly pointing out that no one questioned the white man’s right to such. He did soften his harsh views of other Civil Rights leaders, however, including King.

Malcolm X had such capacity for growth that it is tragic that his enemies cut him down so early in life. A line from Ossie Davis’s eulogy is appropriate for us today:  “However much we may have differed from him, let his going from us serve to bring us together.” We owe a great debt to Spike Lee in reminding us that the African American community looks to martyred leaders, united in their fervent desire to free their people from oppression but differing in their ap­proaches.  The debate over the two approaches still rages. You can hear it, if you pay attention to the words, in the rap music of angry groups, and in the eulogies and speeches of the MLK tributes in January.

It behooves white Americans, especially after so many years of not so “benign neglect” of the problem of racism, to see and discuss this film and the book which lies behind it. Malcolm X is one movie that really does matter!

This review originally did not have questions, but there will be some when it is included in the July issue of VP.

The story of Malcolm X from his youthful gangster days thru his conversion to Islam in prison to his rise in leadership of Black Muslims and his murder when he broke with its leader.
Editor Rating ★★★★★5 out of 5
More Details