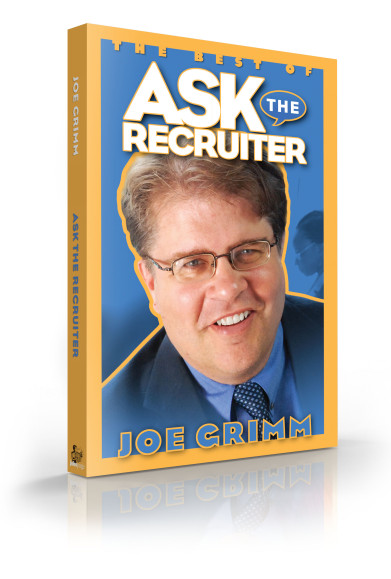 Want to land a job in news media? Joe Grimm is The Recruiter. The veteran journalist is such an expert at finding jobs in newsrooms that he was asked to create and write the popular Ask the Recruiter column for the Poynter Institute, the leading nonprofit in training mid-career journalists. After decades of working with employers and job candidates, most of Joe’s coaching applies to all professional fields. In this book, you get his best advice.

A VETERAN’S ADVICE FOR JOB CANDIDATES

Joe Grimm teaches and works with student groups at Michigan State University’s top-ranked School of Journalism. He was newsroom recruiter and staff development editor at the Detroit Free Press from 1990 through 2008. During those years he also worked with corporate recruiting teams at Gannett and Knight Ridder. He has interviewed hundreds of people, reviewed thousands of job candidates and recruited at hundreds of job fairs and college campus career days. In 1993, he established an annual jobs fair in Detroit. In 1997, he launched the JobsPage, a journalism career site, at www.jobspage.com.

When giving advice, Joe Grimm knows what he’s talking about. He joined the Free Press in 1983 and has been a copy editor, news editor, front-page designer, weekend editor and ombudsman. He began his newspaper career at the Oakland Press where he was a copy editor, wire editor, copy desk chief, page-one designer, regional editor and associate editor. He has bachelor’s and master’s degrees in journalism and a teaching certificate from the University of Michigan. At Oakland University, and now at Michigan State University, he has taught media editing, copy editing, reporting, editorial writing and photojournalism. When you read The Recruiter’s advice about jobs in media—he’s likely held the job you’re seeking and has taught students to fill that job, as well.

Often, landing a job in news media means bringing cutting-edge ideas to the table. That’s an area where Joe Grimm excels. He coordinated the MSU class that produced The New Bullying in 101 days to weigh in on a hot topic in the news. In Coney Detroit, co-authored with Katherine Yung, Joe tells the story of Detroit’s signature coney island hot dogs. Not only does this Wayne State University Press book celebrate a food—it also promotes a major American city and fuels tourism. Joe didn’t stop there in making helpful connections through media. In preparing the book, he also invited a wide array of Detroit-area freelance photographers to illustrate the book and showcase their own work, in the process. In one book about hotdogs, Joe reached out to connect people and fuel commerce in many different ways. Such creativity is a key to success in the next wave of media.

As a journalist with a deep commitment to diversity, Joe Grimm also has pioneered new forms of educational materials about ethnic groups. For example, he pulled together the team that created 100 Questions and Answers About Arab-Americans in 2000. He posted that guide the day after the Sept. 11, 2001, terrorist attacks and it became a timely and heavily trafficked publication.

If you’re interested in this book, you’ll also find it valuable to read Joe Grimm’s Breaking In with even more tips for finding a job.