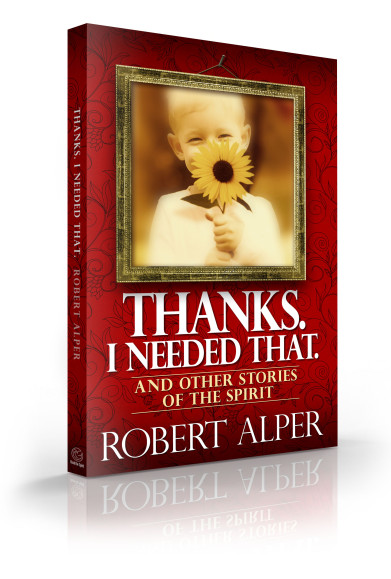 There’s no storyteller like Rabbi Bob Alper, the world’s only full-time stand-up comic and practicing rabbi, whose hilarious routines are heard daily on the Sirius/XM clean comedy channel. His new book features 32 true stories from settings as far flung as The Tonight Show studio, the hills of Vermont, and a tiny Polish village. Readers meet a stained-glass artist whose granddaughter is Drew Barrymore, a woman who attends services with her dog, a 5-year-old grief counselor and an elderly Holocaust survivor who discovers that he can speak about his lost sisters for the first time.

Warm, touching stories that evoke laughter and tears, as told by a rabbi who became a full-time stand-up comic (really).

A moving coincidence with two elderly nuns, a teen smashing her dad’s prized Thunderbird, an exterminator’s secrets, an obnoxious wedding photographer – these are among Bob’s new collection of stories, following his earlier book that a Detroit Free Press reviewer called “a volume of spiritual gems.”

In “Thanks. I Needed That.,” Bob guides the reader to places as diverse as synagogues in Kentucky and London, a small plane flying over Oklahoma, a refusenik’s Moscow apartment, comedy clubs and even a convention of rabbis.

Bob’s unique experiences, from leading large congregations to performing stand-up at Toronto’s “Muslimfest,” make for a wealth of engaging stories that touch people of all backgrounds with warmth, humor, and wisdom.