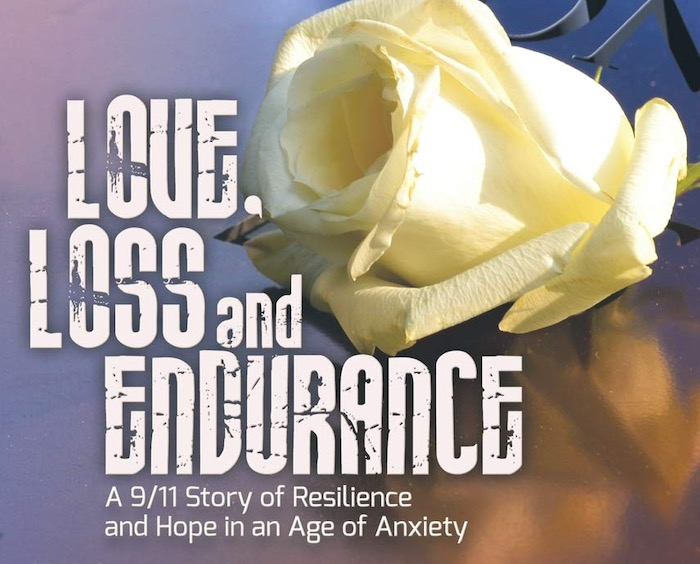 WANT TO FIND OUT ABOUT THE BOOK RIGHT NOW? Click on this closeup image from Bill Tammeus’s cover and visit the book’s Amazon page.

There is a bright red line in journalist Bill Tammeus’s new book, Love, Loss and Endurance that runs from 9/11/2001 through 1/6/2021—as deadly extremism has continued to spread around the world and across the United States.

The book is a gripping, page-turning journey through his family’s years of searching for answers after one of their own was killed in the first plane that hit the World Trade Center on 9/11. As we meet Bill’s shell-shocked family and come to care about their lives after 9/11, Bill adds what he calls “interludes” explaining how extremist religious and political movements have continued to push thousands of men and women toward terrorism. His book ends with 16 pages of wisdom he has collected in two decades of reporting about how to respond to these dangerous movements—one person and one community at a time.

This is the a very timely and helpful book that individuals and congregations can discuss as 2021 dawns. The books ship from Amazon this week. Interested in a group order for your class or community? Email us at [email protected]

The Dangers of ‘Monochromatic’ Thinking 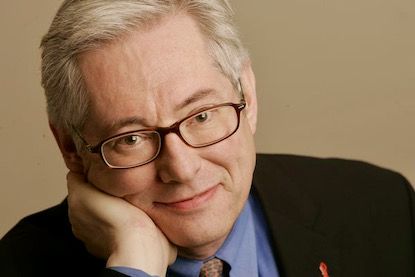 Clicking on this photo of Bill Tammeus will take you to his Faith Matters website, which shares his ongoing columns and a rich resource of past columns, as well.

Remarkably, Bill put the final touches on his book in November 2020. And, no, he does not specifically predict the details of the January 6 terrorist attack on the U.S. Capitol. But, reading his book, that world-changing tragedy looms as clear as broken glass.

How was he so prophetic?

In our interview this week, Bill said, “What happened on 1/6 did not surprise me. As a journalist, I have studied history. I have been a journalist for many years and I have seen over and over again how tempting it is to fall into monochromatic—black and white—kinds of reasoning. In the last several years, some of this reasoning has become very dangerous and has led to crazy ideas. It’s the job of journalists to shine a spotlight on those things going wrong in our culture, to explain why the dangerous things we see are wrong—and to share with people what they can do about this.

“So, yes, there is my role as a journalist that helped me to know that something like this was coming. Then, I’m also a person of faith and our faith teaches us that people are fragile and can be drawn toward sin and these crazy ways of thinking that are destructive. Sometimes, we see things happening that are so tragic that they break God’s heart—like what we saw on 9/11 and 1/6—and this should also break our hearts. We should stand up as people of faith and say out loud that this is wrong. We should talk about what we can do to respond.”

How did Bill develop this metaphor of “monochromatic” thinking?

“I really have been thinking about this since Adam Hamilton’s book, Seeing Gray in a World of Black and White,” Bill said.

And, that’s why the influential author and United Methodist pastor, Adam Hamilton, wrote the Foreword to Bill’s new book, which says in part:

“Tammeus, who is himself a devout Christian, writes ‘Interlude’ after ‘Interlude’ within the main narrative to educate and challenge us with meaningful insights on how religion is sometimes twisted and used as a justification for evil. And he doesn’t just complain that extremism of various kinds continues to cause shocking destruction across the globe, he offers a list of helpful suggestions for what you and I can do to stand up against such fanaticism.”

The Prophetic Wisdom of the ‘Interludes’

When Bill was writing the book, he explained to his editors that this book weaves together two parallel narratives: the real-life story of an American family struggling for answers about the extremism that took their loved one—and the real-life story of some other American families drifting toward deadly extremism. Woven together, these narratives make this book very compelling reading. As we turn these pages, the two paths are easy to identify. For the most part, the second narrative appears in short sections called “Interludes.”

To give you an idea of how prophetic these passages are today, here is one brief excerpt that could have been written in the days after 1/6/2021:

“We now will enter a protracted period of national grief that will be full of not only pain but also of recrimination and angry ideas for how to respond. As this takes place, let’s remember what we value. Let’s remember who we are. Let’s not give in to blind and widespread hatred. Rather, let us hold accountable those who rained havoc on us. Let us bind our wounds. … This will not be easy, but it is what we all must do, including me.”

Astonishing but true: That particular paragraph was written by Bill in the newsroom of The Kansas City Star on 9/11/2001. You can understand why we are describing Bill as a “prophetic” writer and teacher.

Nearly 20 years since he wrote those words, Bill now adds in the final 16 pages of his book eight different things individuals, families and congregations can do to “unplug extremism.” These ideas may seem simple at first glance, but they’re not. In fact, they are gleaned from decades of wisdom Bill has accumulated from around the world.

The first thing to realize, Bill advises in that final section of his book, is that this truly is a global problem we share with the entire human race. He writes, in part: “We Americans, not surprisingly, tend to see our lives through our America-centric eyes. When we talk about racism and the zealots who preach it, for instance, generally we’re referring to the idea of white supremacy that shaped our nation’s founding as well as the history of slavery in the U.S., to our Civil War, to Reconstruction and the rise of the Ku Klux Klan, to the Jim Crow era and finally to the civil rights movement and later efforts to combat the worst of it all. But, in fact, monochromatic racist thinking that leads to violence is an international phenomenon.”

Why did he decide to bring his two narratives together in this section on solutions?

In our interview, Bill explained, “While I was writing our family’s story, and these interludes about other developments, I realized that these narratives only take us so far. What I need to do at the end of this book is offer hope and a way forward. I know this may sound like really simple stuff. For example, the first step I write about is learning to respect and love others. You might say, ‘Well, duh!’ But as you read through all the ideas in these final 16 pages, you’ll see I’m taking you through a progression of steps that causes us to engage in generative and constructive discussions—not only with our families and members of our congregations, but also people of other faiths and cultures.”

Where Was the Intersection of Religion and Extremism on 1/6?

Because Bill’s book was finished in November, he does not have a section in this first edition specifically analyzing the events on 1/6. However, Bill is an active journalist and writes regularly at his home website: Bill’s Faith Matters Blog.

This week, Bill has added a column headlined, What can we do about all the extremism? That column details some of the religious cross-currents in the attack on the Capitol and the related extremist movements in early 2021. This includes the ugly resurfacing of centuries-old religious movements that encourage racism and antisemitism.

Bill certainly is not alone in his reporting. Since 1/6, we have seen significant reporting on this toxic brew of religious zeal and hatred by many leading journalists, among them: Carey Wallace in TIME as well as Elizabeth Diaz and Ruth Graham in The New York Times. Bill cites the work of other journalistic colleagues in his column, linked above.

Bill closes his column with the same kind of Call to Action that closes his new book: “We’re in for a long struggle against irrationality, baseless conspiracy theories, diseased theology and other extremism. But we’re not without tools and we’re not without hope. We cannot, however, just sit by and hope someone else will do the work of undermining all this evil.”

Get Involved with your Family and Friends

Why is it important to talk about these issues within your family, congregation and community? Because we all can play a role in showing others—including the next generations—how to balance faith and the future of our world in a peaceful way, Bill says.

In our interview, Bill concluded, “We forget that every generation has to learn this stuff. Let me speak for myself. I’m of the age where I have eight grandchildren, the oldest is 18 and the youngest is 4. I’ve always tried to be a source to help them learn the stuff we are talking about here. They are picking up on our history and the values that have shaped our lives.

“If we don’t do that, we fail ourselves and our communities and dangerous ways of thinking can emerge again. As every generation comes along, we have to teach the children well.”

As 2021 dawns and Bill’s book is released for sale nationally on January 19, 2021, he already is talking with other media professionals—and he is offering to appear with book-discussion groups and at special events and conferences. He will consider requests, depending on the specific details and his schedule. In this era of Zoom gatherings, author visits are now more popular than ever.

Bill also is interested in reader feedback about the book. Later this spring, he will develop a Discussion Guide for the book, based on initial feedback from early readers. So, yes, you can make a real difference in this project by reading the book, discussing it with friends—and getting in touch with us.

Get the book. It’s available in hardcover, paperback and Kindle from Amazon. It’s available as well via Barnes & Noble. You will also find the book in Walmart’s website and wherever else you regularly order books.

On launch day Tuesday, January 19, 2020 Bill will appear online through the Kansas City Public Library. At that webpage, you’ll find a direct link to stream Bill’s appearance via YouTube wherever you’re based around the world.