This week we have an audio treat for you! All of Duncan Newcomer’s ReadTheSpirit columns—and the chapters of his book 30 Days with Abraham Lincoln: Quite Fire—are based on episodes in a long-running radio series broadcast from Maine’s public radio station WERU. The stories always vary somewhat from text to radio broadcast. If you would like to hear Duncan’s recent 6-minute broadcast version of this column—please click here to listen via WERU’s online streaming service. 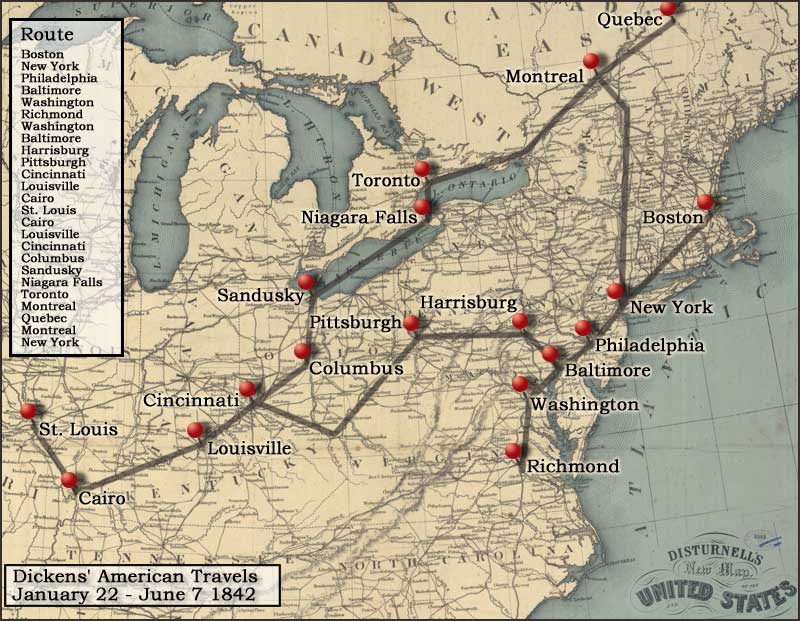 Charles Dickens’ 1842 tour. (Click the image to enlarge it.)

Right! Lincoln never said that. It is hard to imagine that he ever would ever have said this. Lincoln is the least “Bah, Humbug!” person you can imagine.

However, looking at the spiritual life of Lincoln, we can see that the pattern of redemption found in Charles Dickens’ classic A Christmas Carol would have been familiar to Lincoln. Dickens’ most enduring story was published in 1843, the year after the author toured America in 1842 to give public readings of his works. There’s little evidence that Lincoln read much of Dickens and we know the two men never met. However, we do know that Dickens came to admire Lincoln and was curious about him when he launched his second American tour in 1867. During that tour, Dickens wrote a long letter home saying that he had enjoyed a dinner with Secretary of War Edwin Stanton, one of Lincoln’s closest advisors, during which Stanton described Lincoln’s final days in great, emotional detail.

While Lincoln and Dickens never met and there’s no record of Lincoln writing or talking about A Christmas Carol—Lincoln clearly would have known about this very popular story. More importantly, he would have recognized the arc of the story from his frontier camp-meeting revival days. Lincoln was very familiar with tales of poor sinners confronting their sins and reaching a heart-conversion.

At the end of the Dickens’ story, Scrooge sees the impact of his own miserliness. He fears that he may have missed any chance for redemption. Then, he awakens and opens his heart to his nephew’s family, his employee Bob Cratchit and Bob’s son Tiny Tim. We know Lincoln was the kind of person who would have smiled fondly and shed a tear at the character of Tiny Tim. 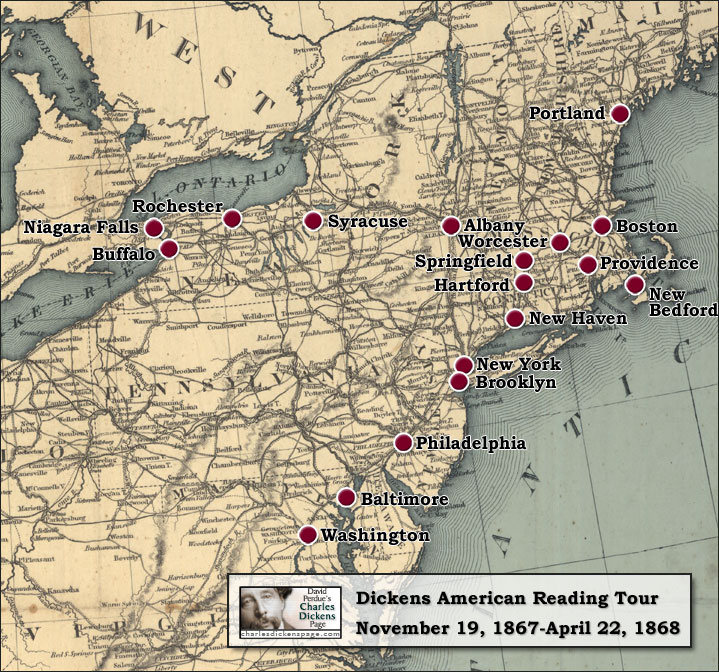 Dickens, of course, knew something of America’s Great Awakening revivalism. Among other things, he knew that classic American sermon by Jonathan Edwards about the sinner-spider dangling over the fire of hell suspended only by the hand of the angry but gracious God. We see that same pattern in the inner narrative of Ebenezer Scrooge’s awakening heart.

Scrooge is not so much greedy as he is miserly. He does not want to spend for anything, certainly not the poor. He is a hoarder. He growls that the needy are not his responsibility. “Is there not a safety-net!?!”

In his ghost-escorted tour, Scrooge begins by seeing himself when he was a lonely boy. He feels sympathy for himself and so do we, as readers of the tale. But he seems to feel that having things and keeping things will cure his wounded inner boy. We see him betray himself and his fiancée in his thirst for gold. Miserly greed becomes the habit of his heart and turns him into the heartless man who gives his assistant Bob Cratchit only a candle to keep warm during his long, cold, winter days at work.

Then, we are moved by the potential death of the ill Tiny Tim, the lame boy who finds joy in going to church on Christmas Eve so that people can see who it was that Jesus came to love. We are carried along to the good-hearted nephew’s family dinner.

But not Scrooge. He sees instead the greed of the very poor who he believes are willing to rob him. His spectral tour guide takes him to a future Christmas in which he has died and his servant steals his bed sheets and bed curtains from around him to sell for a bit of cash. He is remembered, in this vision, only as a cruel man resented by everyone.

Fear of his death, and of there being no chance left to change, seeps into Scrooge’s heart. He also is taken by the Ghost of Christmas Present to see the sufferings of the whole wide world on Christmas Eve. This begins to move Scrooge, to awaken his spirit.

The story is a morally inspired dream in which Scrooge finally does get the message, then awakens to celebrate his unearned reprieve.

Re-envisioning the tale:
A Christmas Carol with Abraham Lincoln

Now, Lincoln loved the theater of his own mind and said he’d rather read a Shakespeare play than see it on stage. So in the theater of our minds let us visit here another fantasy, a re-envisioning, A Christmas Carol with Abraham Lincoln: 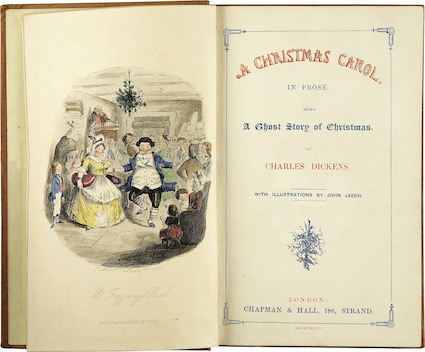 Mr. Lincoln approached the White House door, but it opened slowly without his touching the latch. There, as he entered, was the ghost of old Thomas Jefferson with an urgent look on his face. He was draped in chains.

Jefferson moaned like Jacob Marley: “President Lincoln, Abraham Lincoln, you know I had hold of a wolf by its ears, slavery! Now I have these chains myself. But what of the country, Lincoln? What of the country?! Slavery was something that the next generations would have to solve. I could not, embedded in my way of life. We couldn’t as nation. We needed foreign trade for economic growth, and to support our rural way of life. So for cotton we needed slaves, for then, for a while.

Jefferson continued: “But you know, as did I, this was a terrible contradiction of the very Declaration of Independence that I had written. All men are created equal, I proclaimed. It was self-evident, and it was sacred. We all knew that: Franklin, Adams, and others. But we knew we were building our house on sand, not rock. What has become of that wolf, Lincoln? What has become of the slaves? What is to become of my own chains, the country’s chains? You must do something as President. You must. If not you too will be haunted by these chains, as am I. A ghost will come to you Abraham, three times, beware!”

And so came the Ghost of America Past. What did they see? What did Mr. Lincoln see?

He saw slaves like fish on a trout line. He saw violent men cross state borders to capture runaway slaves. He saw a moral evil growing in new states. He saw blacks being defined by the Supreme Count as non existent. He saw slaves being counted for the census at 3/5th of a person. He saw slave power becoming an oligarchy, and white middle class and poor families pushed to the margins. He saw Slave Empires ready to move south into Mexico and Central America. He saw the hope of self-government dying because of the state power needed to enforce humans as property.

Then came the question: “And, what about now, Mr. Lincoln?”

That’s when the Ghost of America Present took Lincoln around the nation that night, December 24, 1864. What did they see? They saw more hate, not less. They saw war. They saw General Sherman invade the South and burn a path across it. They saw Black soldiers from the Union being shot as prisoners not as military men. And they saw more and more hatred: Southern whites hating the federal government; Northern whites hating to fight for Black freedom rather than for just the Union.

They saw Lincoln as a dictator. “King Abraham.” They saw hundreds of thousands of deaths, mostly young men as soldiers north and south.

Then the Ghost of America Yet To Come took Lincoln’s arm.

Did they hear mystic chords of memory? A chorus stretching from every patriot grave to every living heart and hearth-stone, a swelling chorus of Union, touching our better angels?

Could there be a rebirth without malice, a just and lasting peace within America, with the other nations?

“Lincoln,” said Thomas Jefferson, “you must prevail. America must become America. It cannot be left to me and my chains.”

From a story such as this a vision could light us, as it did Lincoln, down in honor, even to the latest generation.