“Each year sees the disappearance of thousands of plant and animal species which we will never know, which our children will never see, because they have been lost for ever. The great majority become extinct for reasons related to human activity. Because of us, thousands of species will no longer … convey their message to us. We have no such right.” Marc Bekoff and a friend, in this case a wolf.

The opening quote today is not from Marc Bekoff’s two new books that invite us to explore the inner lives of dogs: Canine Confidential and Unleashing Your Dog. That quote—an impassioned plea for justice on behalf of the animals sharing this planet with us—is from Pope Francis’s major encyclical, Laudato si’.

Readers who first discover writers like Marc Bekoff could mistake them for animal-rights advocates on the vegan fringe. In fact, Marc is a long-time researcher and scientist. Almost by accident, he became a best-selling author by reporting on emerging scientific research—and combining that news with a love of animals shared by millions of us around the world.

Some of his books, like his popular Why Dogs Hump and Bees Get Depressed, read like news dispatches from the front lines of research. That book features not only his fascinating anecdotes that are fun to read, but also a wealth of links and citations readers can follow to websites, news stories and journals that will provide a wealth of background information.

To be clear: Bekoff is a secular scholar and researcher with little personal interest in religion—but his writings also parallel timeless spiritual wisdom expressed by many spiritual leaders, including Pope Francis. His readers make their own choices. Bekoff is a master teacher. His personal style focuses on explaining and encouraging—not preaching. But many of his readers over the years have connected the breadcrumbs he drops along the way to make their own connections between science and religion.

Evidence of Bekoff’s success in spanning the realms of both peer-reviewed science as well as spiritual reflection is the fact that his first book in this new series about dogs, Canine Confidential, was published by the venerable academic publisher University of Chicago Press. Then, Unleashing Your Dog comes from the creative folks at New World Library who are known for celebrating religious diversity. Clearly, his teaching spans both realms.

What’s in the book? Canine Confidential 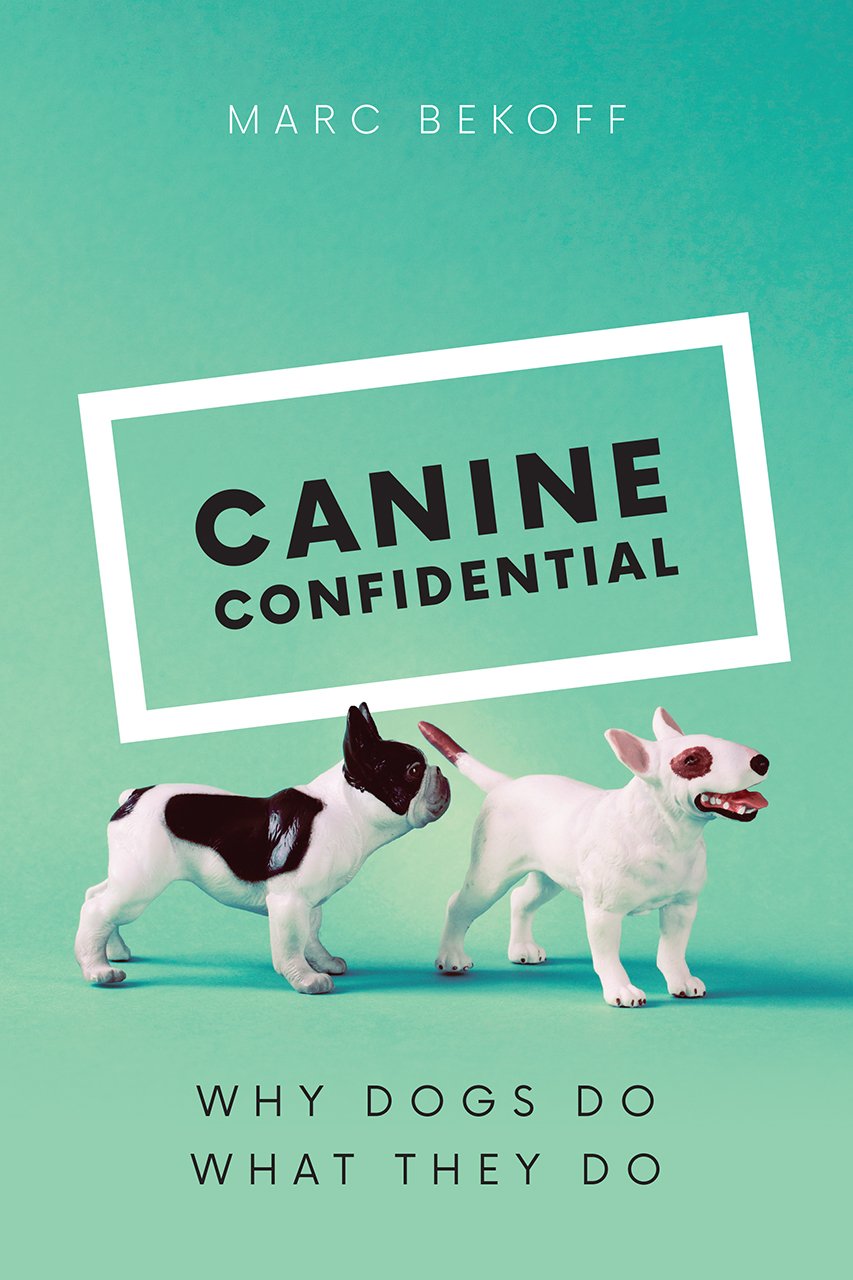 “Will you help me describe to readers the differences between these two books?” I asked Marc in a recent interview. “They’re likely to start with one—but they may want both as they begin to see how much helpful information you provide.”

“Well, the first thing I would say is: The two books are quite different,” he said. “But there is  overlap. That’s because both books really are about how we can give dogs the best lives possible by understanding more about their world.

“Canine Confidential really is about dog behavior—all kinds of dog behavior. I discuss cognition, what dogs think, emotions and what dogs feel.”

In the Preface, Marc explains that Canine Confidential is his summation of a lifetime of talking with people about their dogs.

“I’ve probably heard every question there is about dogs,” he writes. So, in this book, he tackles a looong list of questions, including:

What’s in the book? Unleashing Your Dog 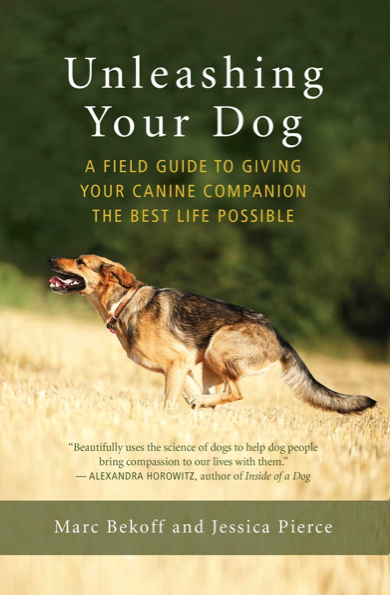 “Then, I would describe Unleashing Your Dog as going deeper into ways you can enhance your dog’s life by looking at their senses,” Marc said. Jessica Pierce, who also is a well-known researcher and author on animal behavior, co-authored Unleashing.

“In Canine Confidential, I encourage people to become dog literate—or fluent in dog. Then, in Unleashing Your Dog, we help people understand a lot more about what that means by telling people a lot about dogs’ five senses,” Marc said.

The book is organized into five major sections:

“The more you understand about your dog’s life, the more the relationship is a win-win for all,” Marc said.

“Explain the title,” I said to Marc. “Because you’re not arguing that dogs should never be on a tether. It’s more of a general goal of allowing your dog more freedom, right?”

“Yes, it’s more of a metaphorical reference,” Marc said. “But we do argue in the book that, because dogs have to be tethered to humans for so much of their lives, you should find ways to unleash your dog as much as possible. Let them run free whenever you can. And, don’t constantly shout at them to stop or come back to you, because you think they’re misbehaving. A lot of times, they’re doing things that are very dog appropriate—if we understand why they’re doing these things.”

Bridging the Science and Spiritual Divide

Some Eastern traditions have been preaching compassion for all living things for thousands of years. In Western Christianity, the 12th-century St. Francis of Assisi was a pioneer in reminding Catholics that God intended animals to be our partners in life on earth. Then, the 18th-century founder of Methodism, John Wesley, preached to Protestants that God intends animals to join us in heaven one day—so we had better care for them compassionately in this life. Wesley was a pioneer in the British movement that eventually founded the world’s first society for the compassionate care of animals.

In other words, although he writes as a secular scientist, Bekoff’s invitations to learn more about animals’ lives connect with powerful, centuries-old traditions in the world’s spiritual traditions—as well as the latest in scientific research.

His books are great choices for animal lovers—and make great gifts for animal lovers on your shopping list. What’s more? Although Bekoff writes from a secular point of view, his books are a fascinating choice for reading in classes and small groups that meet in congregations. You could read Bekoff’s book in parallel with a book such as Every Living Thing, which covers a wide range of spiritual teachings about animal care.

In such a small-group setting, readers will discover echoes from both spiritual and scientific communities about our relationships with animals.

One example: Bekoff argues that humans should not regard the world as simply a place where humans are free to manipulate all life for their own benefit. All creatures have rights to pursue life in this world. Bekoff argues on behalf of simple justice and fairness in this world. He asks: Shouldn’t all creatures be allowed to have the best life possible?

Then, if group participants turn to the writings of John Wesley, or other early British Christian leaders who called for compassionate care of animals—they will find these same arguments from a religious perspective.

When asked about the religious traditions that parallel his own ethical arguments, Marc said, “I can only speak as a researcher. That’s my field. But, whatever helps you decide to become more deeply involved in interacting with your dog—I can tell you this: It will bring you and your dog a lot more joy in life.” 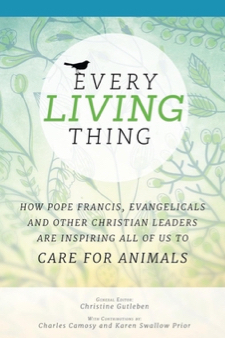 GET THE BOOKS. Follow the links above to Marc Bekoff’s two new books about dogs.

‘EVERY LIVING THING’ The Humane Society of the United States produced this inspiring overview of statements about animal care from many different religious groups. The book is available from Amazon in Kindle and paperback.