When you look left and right—who do you see? This 1963 photo shows a civil rights march on Washington D.C. (Public domain from the U.S. National Archives.)

EDITOR’s NOTE—Once a month, veteran journalist Martin Davis contributes a column about the spiritual life of the millions of men and women who have left organized religion. Today, that group amounts to 1 in 4 Americans. We want you to play a role in this national conversation—so, we are trying something new with this column. We are publishing it along with several thoughtful responses from some of our other contributing writers. From all of us at ReadTheSpirit: We invite you to add your own comments—and to share this column with friends.

Over the course of a decade, I’ve built a close friendship with a Baptist minister here in Fredericksburg, Virginia. As I’ve walked a path out of organized religion, he has been both supporter and sparring partner. He also asked the one question I’ve struggled most to answer.

Summarized, the question is this: If you reject religion, what becomes your measuring stick for right and wrong?

On one level, the question shouldn’t bother me. Just because one follows a particular faith tradition is no guarantee that your sense of right and wrong will be formed appropriately or used responsibly. I can point to any number of examples, as I’m sure you can, too.

And yet, this question has haunted me, because in the depths of my soul, I had no answer.

Send in the Marines 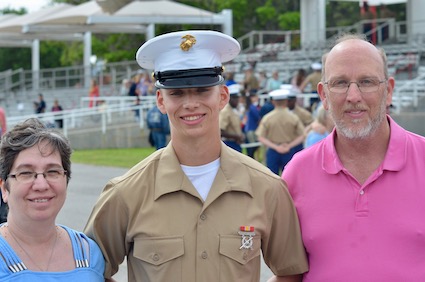 At Parris Island with our son.

As often happens when I wrestle with complex problems, solutions arise when I least expect them—and in places I’d never expect them. The answer to this troubling question came at Marine Corps Recruit Depot, Parris Island, South Carolina.

I was there in mid-April to attend my son’s graduation from boot camp. (You may want to read my earlier column about my son, called The Letter.).

Sitting in the stands that line Peatross Parade Deck, I listened as the base commander took the microphone and turned to address the graduates. “Today is about you,” he began, “and your accomplishment.”

The words hit me with all the power that the Burning Bush must have struck Moses. The concept of giving your life for a friend, of living for those you don’t even know, is deeply ingrained in many of the world’s major religions. Understanding the depths of this, however, demands more than thought.

Watching my son commit himself to an ideal that demands he put his life on the line for the Marine to his left and right, and for those who stand at home away from imminent danger, gave me a new perspective on loving your neighbor.

At 19 years of age, he has grasped and embraced what it means to stand by the person to your left and your right more than I have at age 56. And more than most of us will ever have to embrace that ideal.

Living for the person to our left and our right. That is a ruler by which any of us would do well to measure our lives.

If you’re less than impressed with my own revelation, I can understand why. “There’s nothing new here,” you might say. And you would be correct.

But allow me to return for just a moment to my Baptist friend.

I went through some horribly dark days a number of years back. And it has always stayed with me that when there was no one else to turn to, he was there—both in body, as well as in material ways.

He was there knowing that I had left his tradition–the one into which I was born. And he know that I had done so precisely because of the core of its teachings. He was there when I cursed, quite literally, the very god that he worshipped. And he was there, again, when our own arguments about politics threatened to tear our friendship apart.

Today, my friend is facing his own dark days. He is on my left, and on my right. And I will be there for him as much as he has been for me. I will do so because at the end of the day, we are the same.

Human. Despite the petty differences that separate us.

Because this truth leads us to recognize that the line of people we should care about extends—well, it extends to people we don’t even know.

It’s not hard to understand.

It is incredibly difficult to live.

May we all rise to the task. 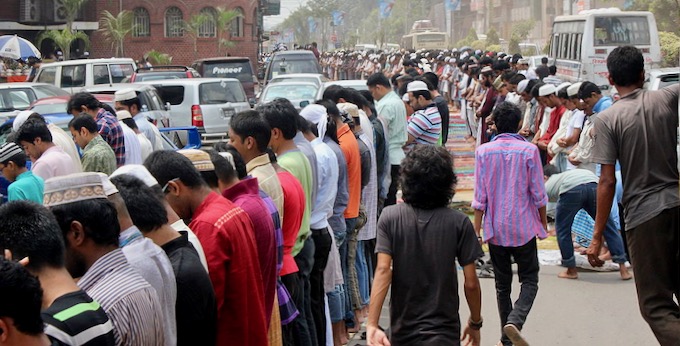 As I read Martin’s column on the eve of Ramadan, which began at sunset on May 5 this year, I naturally thought of the long lines of Muslims gathering for prayer. During the fasting month, many mosques are packed to capacity after sunset for the day’s final prayers and then recitations of the Quran. Then, on the first morning after Ramadan, vast crowds often spill out of mosque doorways into the streets to celebrate the Eid al-Fitr. As a journalist specializing in covering global diversity, I have observed many of these almost overwhelming Eid celebrations.

Most non-Muslims know little about the content of these prayers, except that they involve chanting and repeated bowing. So, it may surprise non-Muslims to know that a proper prayer time (called salah or salat) must end with taslim (or tasleem) in which a person turns to both the right and to the left and says, “Peace and blessings of God be unto you.” For Christians, this might be compared to “passing the peace” in worship. Muslims believe this is an essential part of salah, because each of us must always be concerned with the people around us, as well as our relationship with God.

And to our Muslim readers: Ramadan Mubarak!

David Crumm is the Editor of ReadTheSpirit magazine.

From Stephanie Fenton:
‘Our Future May Depend on It’

Raised in a devout religious denomination, it was as a young adult that I sought a truth beyond the faith I was born into, as Martin did. I could not grasp how others who practiced religions different than mine, lived by moral principles and devoted their deeds to carrying out a “good” life could be shunned for beliefs different than my own. I don’t think that kind of rejection reflects the all-encompassing love that religion teaches.

Several years and prayers later, an answer came: I was to begin the journey of documenting the holidays of world faiths in a weekly column, delving deeper into the tenets of each. Today, after more than a decade, I have come to realize a simple truth: We all see the same God. Whether we see God in a church or a temple, in the natural beauty of the outdoors or in the secular words of an addressee at a Marines ceremony, we share the same need for love—and we must share that love with others, despite our differences in opinions or beliefs.

Stephanie Fenton is an editor for Front Edge Publishing and our Holidays & Festivals columnist. 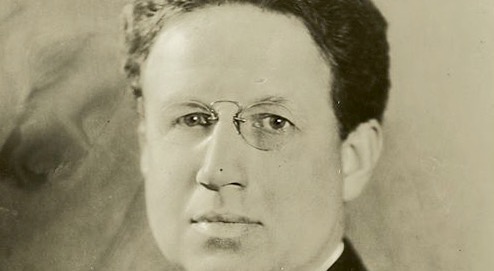 From Benjamin Pratt:
‘Christianity is to be done.’

Martin, you mentioned your own Baptist heritage and your friend, the sacrificial Baptist pastor. Harry Emerson Fosdick, another remarkable Baptist said:

“ ‘If any man would come after me, let him deny himself, and take up his cross, and follow me’—that is Jesus, calling not for the acceptance of a theory but for the assumption of a task. Nine times out of ten the real conviction of mankind that anything is credible has come not from an abstract argument, but from deeds which showed it to be possible.”

Martin, I believe your son’s commitment to “put his life on the line for the Marine to his left and right,” and your commitment to be there for your good friend embodies what Fosdick would call “Christianity being done.” You, your son, your friend show it is true and possible and credible.

Benjamin Pratt is the author of several books and a regular contributing columnist to ReadTheSpirit magazine. 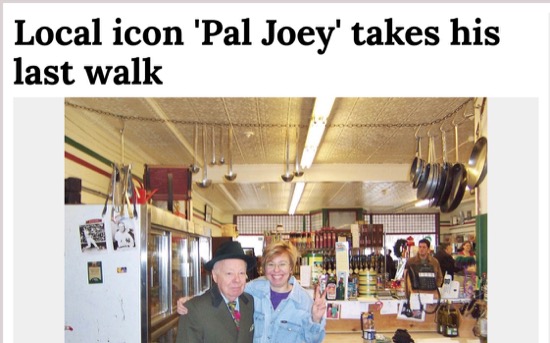 Click this image to read the Manchester Journal’s story on Pal Joey.

From Rabbi Bob Alper:
How Pal Joey Rose to the Task

I love and admire Marty’s description of his son’s commitment to putting his life on the line as a demonstration of loving his neighbor. Yet very few of us can become Marines, and very few of us will find ourselves in a position where we risk our lives to serve and even save others.

So let me tell you about Joey Diaferio, or “Pal Joey” as he was called. He died last week at 88. For the past 18 years, ever since he moved to our small Vermont town to be near his daughter, Pal Joey traversed the downtown area daily, in all kinds of weather, collecting cans and bottles. Joey was a curious sight, wearing colorful clothes. Our weekly paper ran a front page obituary. That story told us something few knew: for 18 years, every single nickel, every single dime received for his bottles and cans Joey donated to the community food cupboard. That’s how Pal Joey loved his neighbor.

Bob Alper is a rabbi, a standup comedian and the author of several books.
.
.

And now it’s your turn …

Or, email us with your thoughts at [email protected]

And, please: Share this column with friends to help spark discussion. Pew Research tells us that the ranks of the “1 in 4 Americans who have no religious affiliation” are growing. This is an important conversation as we build healthy, diverse communities.