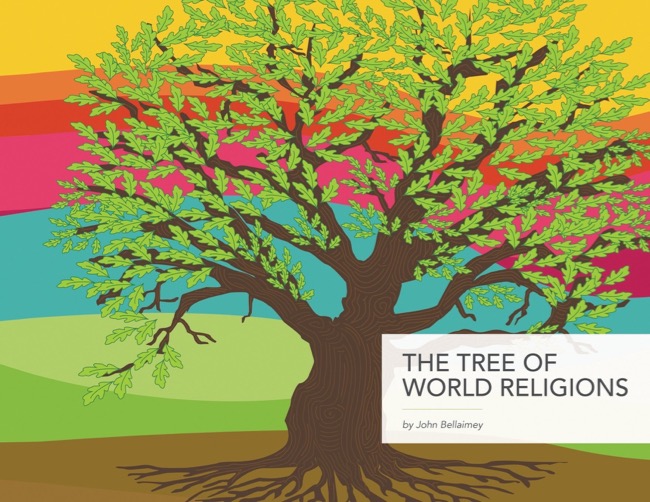 “As for the sacred Scriptures, or Bibles of mankind, who in this town can tell me even their titles?” wrote Henry David Thoreau in the 1850s.

“In America, religion is miles wide and a quarter inch deep,” pollster George Gallup Jr. liked to say in the 1980s.

As citizens of one of the world’s most diverse nations, Americans are ill prepared to understand the religious culture of their next-door neighbors—let alone religion’s influence on major global issues from war and immigration to our shared environmental crises.

In fact, as a nation, we are so ill informed that the Pew Research Center gives Americans a failing grade in its surveys of religious knowledge—even our awareness of our own traditions! According to Pew, roughly half of Catholics don’t know their own church’s basic teaching on the meaning of the Eucharist, half of Protestants don’t know that Martin Luther sparked the Reformation, and half of Jews don’t recognize Maimonides’ name.

Can we hope to change this situation by jump starting basic education about world religions? Well, that’s another problem, Pew researchers tell us. Unfortunately, the majority of Americans incorrectly assume that public school teachers can’t even mention God in their classrooms. The Pew team reports: “Two-thirds of people surveyed incorrectly say that Supreme Court rulings prevent public school teachers from reading from the Bible as an example of literature, and only 36% know that comparative religion classes may be taught in public schools.”

A WISE TEACHER WANTS TO HELP

So, today, please meet John Bellaimey—a veteran educator at the prestigious Breck School, an independent preK-12 college preparatory school in Minnesota. Breck is known for producing more than its share of Merit Scholars and sending students to Ivy League schools. Bellaimey developed The Tree of World Religions to help students understand the religious foundations of our world’s diverse cultures and nations.

“Religion is an essential component of human life around our planet so we need to understand religion with all of its variations,” Bellaimey said in an interview. “Religion affects world politics because it forms the basis for the ways people look at life. If you don’t understand the religious dimensions of culture, you’re not going to understand why many families behave the way they do, why their communities and their nations make crucial decisions and how we can work together globally.”

He continued: “On a personal level, do you enjoy reading? Literature? The movies? A lot of the texts and story lines and motivations don’t make sense unless you understand something about religious beliefs. In this book, I am not trying to convince anyone that one religion is better than any others. That’s not the point. What we recognize as educators is that you can’t really understand the world around us without knowing something about religion.”

Like most Americans, you may be asking yourself: Can he do that!? Can he teach about religion in school? Of course, he can. “Most Americans may not know it, but world religion is a required subject in social studies and history standards in most states, certainly here in Minnesota,” Bellaimey said. “This book is a compilation of my years of teaching about world religion at Beck. Through this book, I’m offering what we’ve learned here to the rest of the world.”

Working with a wide range of colleagues and readers from various religious traditions, Bellaimey has compiled this very inviting introduction to a vast subject. The book is only 128 pages, yet it takes readers from the ancient world to today, along with helpful charts and inviting color photos.

If you enjoy learning about world religions, then you may be surprised by the opening section of John’s book. The first six chapters explore basic questions about religion: What is reality? Are there Higher and Lower realms? What are the basic arguments for belief in God—and against believing in God? How can we hope to define religion? Myth? Ritual? Ethics? Institutions? Experience?

John introduces all of those questions in less than 20 pages! Because this material was developed for classroom use, this book is ideal for sparking spirited discussion in your class or small group. That’s true whether your class is in a school building—or perhaps it’s a Sunday morning class in your congregation or a book group that meets in a coffee shop.

“One thing I’ve been told by students and colleagues is that they especially like the section of my book about belief in God. This is a balanced presentation of that issue, so I don’t make fun of atheists. I simply lay out the basic arguments on both sides—and I really like the results in my classroom from such a presentation. Students have a lot to say!” Bellaimey said.

Putting this book in perspective, there are other textbooks available that are comparatively more expensive and tougher to read. One book that is sometimes assigned in college courses is Oxford’s third edition of its Concise Introduction to World Religion—656 pages with a list price of $91.95. It’s a big, solid slice of scholarship, but rather than “concise,” a more accurate title would be “dense.”

In recent years, two other overviews of this field have been widely praised in popular media.

The most recent is the boxed set called The Norton Anthology of World Religions. The New York Times praised this milestone, edited by Pulitzer Prize winner Jack Miles, calling it “a brick of a book” and also “a generously wide-ranging collection of key texts.” As Editor of ReadTheSpirit, I have Jack’s set on my office shelf for quick reference. However, the set’s list price is $100 and it weighs in at nearly 4,500 pages. If you want a deeper dive into world religion, this is a great choice. We have recommended Jack’s two-volume set since it was released. But you’ll never convince friends to discuss that whopper in a small group—as it’s simply not practical for most classes.

Also among the perennial favorites are works by the late Huston Smith, the granddaddy of religion teachers in popular media. Before his death in 2016, ReadTheSpirit featured Smith in at least a dozen articles about faith traditions. Smith’s The Illustrated World Religions is a fine, colorful introduction to the subject. It’s also got its flaws: It’s twice the length of Bellaimey’s book, making it more of a challenge for group discussion; Huston’s opening section on basic spiritual questions isn’t designed for class discussion; and Smith limits himself to major groups, ignoring some of the fascinating smaller sects that John covers in his volume.

Once again, if you enjoy learning about the world’s many spiritual traditions, you should have at least three of these on your bookshelf: Jack’s big boxed set, Huston’s illustrated volume and John’s new book, ready to pull out to prompt conversation about the whole cosmic array.

TREASURES ALONG THE WAY

“I’m glad you’re going to point out some of the unique little treasures in my book, because I enjoyed adding them and I know that many people will have fun finding them here,” John said in our interview. “If you’re a C.S. Lewis fan, for example, when you get to the chapter on Heaven and Hell in Christianity, you’re likely to enjoy my turning to what I think is one of Lewis’s best books, The Great Divorce, about this imaginary bus line between Heaven and Hell.”

These unique segments sprinkled throughout John’s book aren’t limited to the three main Abrahamic faiths. “I also made a point of adding a chapter on Maya polytheism from Central America,” John said. “Their view is so strange and different to us that it’s really interesting—but in most of the books I have on my shelf about world religions, you don’t find anything like this from Central America.”

There are also chapters toward the end of the book about groups often overlooked in other introductory books, among them: the Church of Jesus Christ of Latter-Day Saints, Christian Science, Ahmadiyya Islam and the Rastafari movement.

Don’t take our “words” for it in this column today. You can see John teach right now. Each of these TED-Ed talks has drawn more than 2 million viewers!

Here’s a four-minute TED-Ed talk by John Bellaimey on the nature of Yin and Yang:

VISIT OUR BOOKSTORES—You’ll find lots of books that explore religious and cultural diversity in our own ReadTheSpiritBookstore and our new Front Edge Publishing Bookstore. 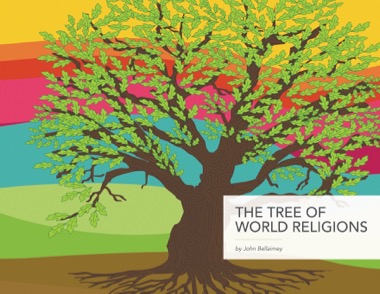 GET JOHN’S BOOK FROM AMAZON—Note that this book we are describing in this Cover Story is listed as the Second Edition of John’s book, a newly revised and expanded book with a release date of May 1, 2018. You may also find an earlier self-published version of John’s book still listed on bookstore websites. You want to be sure you’re selecting the new one.

JOHN BELLAIMEY is a native Detroiter, an Episcopal priest and a full-time teacher and writer. Recently, he traveled around the world with his wife, journalist Lynnell Mickelsen. You can read stories and see lots of photos of their travels at their personal website. John has headed the Religion department at Breck School in Minneapolis since 1989, when he and his family moved from Cambridge, MA. At Harvard, John received the M.Div degree in Religion and Secondary Education. Prior to that, he was Admissions Director at Friends School in Detroit and taught French. In addition, he has taught in Ghana, West Africa, graduated summa cum laude in Anthropology from Haverford College, and helped his father with his family’s tube-fabrication business, Detroit Tube Products, which his sister now directs.