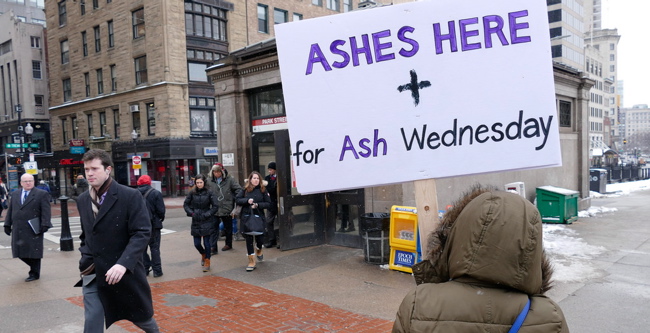 Congregations across the nation are taking to the streets, offering ashes on-the-go to busy Christians. Photo by the Roman Catholic Archdiocese of Boston, courtesy of Flickr

Starting today, Christians observe the 40 days of Lent (excluding Sundays) in preparation for Easter. Western Christians (Roman Catholics, Protestants and others in the “Western” branches of the church) are called to repent and reflect. Many “give up something” for Lent. But the Western tradition is not nearly as extreme as the dietary rules followed by Eastern Christians, who begin their Fast of Great Lent on Monday March 11 this year—an observance known as Clean Monday.

Did you know? The Catholic Church permits ashes on the forehead for anyone who wishes to receive them—not just baptized Catholics. Many Protestant and Anglican churches also include this rite at the start of Lent and more congregations add the service each year.

In fact, Lent is more popular than ever nationwide in the U.S. In his book Our Lent: The Things We Carry, ReadTheSpirit magazine Editor David Crumm writes: “Observance of Lent is booming across the U.S., including nontraditional groups and evangelical churches. Even Catholic parishes nationwide are seeing a rise in season-long observances. This makes sense in an era of turbulent change in our world. A return to spiritual practices—from praying daily to following the centuries-old traditions of Lent—is a journey that reconnects us with the timeless wisdom of our faith.”

Where do we see signs of the vitality of the Lenten season in 2019? First, we see it in ongoing survey research about the religious practices of ordinary Americans. Then, we already are seeing it in news headlines.

One example: The evangelical social-action movement Sojourners is urging followers to take Ash Wednesday and the Lenten season seriously this year. Sojourners’ Jim Wallis has published an open letter about this effort on the group’s website.

And—from the spiritual to the strictly commercial realm—Ad Age magazine just reported that the Gorton’s seafood company is preparing a clever new version of its TV ad campaign featuring male mermaids—Mer-Bros. Ad Age reports, “The updated ads come as Gorton’s and other seafood brands gear up for Lent, a busy time for the brand because people often eat more seafood while abstaining from eating meat on Ash Wednesday and on Fridays.”

This is a very serious matter in America’s multi-billion-dollar fast-food industry, as well. Readers Digest magazine recently published a lengthy story about the history of McDonald’s Filet-O-Fish sandwich, which was created many years ago to meet the preferences of Catholic customers. And today? The magazine reports that about a quarter of the annual Filet-O-Fish sales are during the 40 days of Lent.

A 40-Day Companion for Lent

Many of our readers, over the years, have told us they enjoy reading Crumm’s book during Lent—a book that combines both inspirational reflections on Bible readings as well as a sometimes light-hearted look at contemporary life, today. The book is widely available via online bookstores. Here is the Amazon link for paperback and Kindle.

What’s the book about?

Our Lent is a 40-day, 40-chapter invitation to enjoy that combination of faith and self-guided reflection. Each daily chapter explores something Jesus showed us, including: coins, basins, bowls, bread, cups, swords and tables. In each chapter, the author shares a biblical story from Jesus’ final journey to Jerusalem and explains the significance of the tangible things Jesus lifted up for his followers. Then, each chapter connects the Bible lesson with our own daily lives as well as the lives of men and women who are celebrated in our culture, including the spiritual writer Thomas Merton, the actress and singer Judy Garland, the country musician Merle Haggard and even the beloved Cat in the Hat. After 40 days of connecting scripture with modern life, readers will find themselves freshly aware of the many blessings we have received and the challenges we face in helping to heal the world around us. A woman receives ashes on her forehead at an Ash Wednesday service. Photo John Ragai, courtesy of Flickr

As the majority of the world’s Christians enter Lent, fasting and abstinence open the season leading to Christ’s Passion and Easter. Today, many Christians commemorate Ash Wednesday by receiving ashes on their foreheads—a tradition held since the Middle Ages. In today’s busy world, however, more and more people may be unable to attend a weekday mass, and so congregations are heading to the streets or delivering ashes in “drive-thru” style.

For Ash Wednesday services, though it is custom to burn palm branches from the previous year’s Palm Sunday to prepare the ashes,  the process can be messy for those not accustomed to the procedure. As a result, the majority of churches these days order ashes in sealed containers prepared by Christan-supply companies. During Lent, Christians reflect, pray and renew their commitment to Christ.

How many ‘Western’ and ‘Eastern’ Christians are there? Roughly one third of the world’s population identifies as Christian. That’s 2.2 billion people, according to the worldwide study of religious populations by Pew researchers. The “Eastern” or “Orthodox” branch of Christianity usually is estimated at a little more than 250 million adherents, which means that most Christians around the world follow “Western” customs. As more people globally have busy schedules and less free time during the week, congregations are coming up with new ideas to bring the Church to the people. In Novi, Mich., the Novi United Methodist Church will be one congregation offering “Drive-Thru Ashes” this Ash Wednesday, from 7 a.m. -11 a.m. Pastors and volunteers will provide ashes and prayers and, according to the church, people do not need to exit their vehicles to receive the services.

In 2010, three Chicago-area Episcopal congregations took to the streets with prayer and ashes for people in suburban train stations, with efforts that evolved into the global website AshesToGo.org. Here, people can find lists of participating churches and their locations, in the U.S., UK and more. Though the website has not been updated since last year, the overwhelming news is that more and more congregations are bringing Ash Wednesday services outside of church walls.

Looking for a reflective resource? Check out Our Lent: Things We Carry, a 40-day and 40-chapter inspirational book that connects stories from the life of Jesus with the real things we experience today.

Marking the foreheads of the faithful with ashes at Southwark Cathedral, in England. Photo by Catholic Church England and Wales, courtesy of Flickr

Eastern Orthodox Christians, due to variances in church calendars, will start Lent about a week later following Cheesefare Sunday on February 22 (when Orthodox Christians who plan to observe the fast of Great Lent will have their last taste of cheese until Easter). February 23 is called Clean Monday, the start of that challenging fasting period for Eastern Christians.

In the Western church, Ash Wednesday is supposed to be a day of repentance and prayer. In some churches, palm branches from the previous year’s Palm Sunday are blessed and burned into ashes, although most churches conducting these services now purchase the ashes from religious-supply companies. During a liturgy marking the day, a church leader swipes the ashes into the shape of a cross on the recipient’s forehead. Rather than wash the ashes, recipients are supposed to let the ashes wear off throughout the remainder of the day as part of their spiritual reflections. (Learn more from Wikipedia and Catholic.org.)

The Gospels of Matthew, Mark and Luke detail the story of Jesus spending 40 days fasting in the desert, where he is repeatedly tempted by Satan. Lent similar marks 40 days, not counting Sundays.

In a nationwide effort to bring ashes to those too busy to attend church services, pastors and laypersons are visiting train stations, malls, public parks, coffee shops and college campuses to mark the foreheads of the faithful. From California to Minneapolis, congregations are reporting excitement for this new approach to an old ritual. Leaders report that “Ashes to Go” allows faith traditions to be carried outside the walls of the church to the places where people are on an average day. (Check out stories from ABC News and the Ashbury Park Press.)

In Manila, the Archdiocese has granted a 2015 episcopal jurisdiction exemption or dispensation from the obligation of fasting and abstinence on Ash Wednesday to Filipino-Chinese and Chinese Catholics, in regard for the coinciding of Ash Wednesday with the eve of the Chinese New Year. It has been emphasized, however, that those who choose to accept the dispensation are required to engage in other forms of penance and charity.

Families interested in counting the days of Lent can try a “Lent calendar,” similar to an Advent calendar, in which children can place a sticker on each day as it ends (a calendar can be downloaded here). Alternatively, FishEaters suggests a “Lent chain,” for which children create 40 pieces of paper inscribed with kind acts and prayers. Each day of Lent, the children cut a link and perform the day’s act or prayer.