What was it like growing up on food stamps in Michigan?

Somewhere between Rodney’s first and third grade years, his family was on food stamps.

“We’d go to the grocery store with our little booklet to buy some things, but not other things, because the food stamps program only sanctioned certain items,” Curtis writes.

The youngest of three, Curtis knew that food stamps or no food stamps, their family vacationed the same way most Michigan families vacationed: up North, with a capital N.

Or, if you’re well familiar with the mitten state, you’d know that the capital N doesn’t stress the north part, but just the “anywhere-but-my-city” mentality.

“Up North easily could be due west or even slightly south,” Curtis writes. Because that’s what living in  Michigan is all about: no matter who you are or how you get your food, you have equal access to the state’s natural wonders, and you can vacation in-state to your heart’s content.

For the most part, having been on food stamps gives Rodney ammunition.

“I’m proud of that time in my life, mostly because I can bring it up in conversations with people these days lest they think I had it too good growing up,” Curtis writes.

Don’t worry though, if you think Rodney is trying to milk too much out of his food stamps, he’s got a steady head on his shoulders and recognizes how his childhood could compare to others.

“I think I did, in fact, have it easy compared to most people in the world today–but that doesn’t mean I’m going to concede the point easily among friends,” he admits.

Experiencing food stamps is just one building block of the Spiritual Wanderer’s life. His re-telling clarifies his own childhood, but at the end of the day, makes you think about your own life:

Did I have it easy or hard, growing up?

Check out a sample chapter of Spiritual Wanderer. 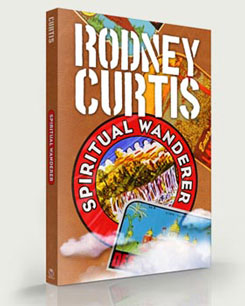