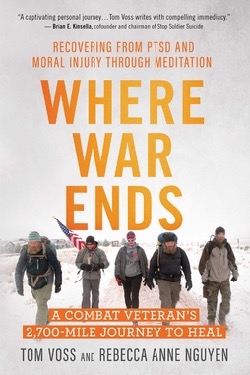 ‘WHERE WAR ENDS—
RECOVERING FROM PTSD AND MORAL INJURY’

COVER STORY—This book could save a life. The 2,700-mile walk across America described in this memoir certainly saved Tom Voss’s life—after the “moral injuries” of horrific violence during his service as an infantry scout in Iraq, where he participated in hundreds of combat and humanitarian missions. You may already have seen the feature-length documentary film about Tom’s trek and his struggle to heal from this trauma that is so common among America’s 18 million veterans.

Each day, 20 veterans die by suicide. Tom nearly did. His work—from his long nationwide hike, to his writing and teaching now that he is recovering—is aimed at helping to reduce that terrible toll.

Please, read our Cover Story, which includes an interview with Tom, links to view the documentary film and to get his new book—plus links to Tom’s website and resources he recommends for veterans and the families and friends who love them.

MARCH 1-7 has become a special week for promoting veterans and their families. So, this week, Susan Stitt writes our Front Edge Publishing column about two related books we publish, designed to help all Americans better understand the lives of veterans: 100 Questions & Answers about Veterans and The Black Knight, the memoir of retired Col. Clifford Worthy, the oldest living African-American graduate of West Point.

Know a veteran? Most of us do. Please, do a good deed this week, read these stories—and join in compassionate responses.

A PERFECT YEAR FOR ‘OUR LENT’—Holidays & Festivals columnist Stephanie Fenton reports on the start of Lent this past week for 2 billion Christians: “With Lent quickly approaching and Easter on the horizon, Western Christians enter the season of repentance on Ash Wednesday—after, of course, making any last indulgences the day before, on Fat Tuesday.” (Click to read more.)

If you’re looking for an inspiring book to read day-by-day along your own Lenten journey this year, we recommend Our Lent: Things We Carry. These 40 daily stories by David Crumm highlight 40 “things” that Jesus and his followers encountered in the final days of his life, which is the story Christians remember as Easter approaches. Each of the daily stories connects those things in Jesus’s life so long ago with people’s lives today. 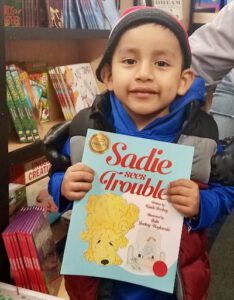 MARCH 6-7—Two national organizations are chiming in on a message shared by ReadTheSpirit and educators nationwide: We should help children to reduce their current levels of screen time. In fact, all of us should consider how much time we spend focused on screens—and devote ourselves to more human contact. Our Holidays & Festivals section has the story, plus news about a great way to mark this holiday with someone you love: Sadie Sees Trouble, a children’s book that’s an open invitation to have unplugged fun around the house.

If you missed it, we just published a couple of stories about children in rural Georgia discovering the love of reading—including a story by Susan Stitt, who rode along on Stan Tucker’s literacy bus and saw the smiling faces of children selecting their books.

ERICK KABENDERA—Journalists around the world, this week, are spreading awareness of the release in Tanzania of Erick Kabendera, a founding member of the International Association of Religion Journalists. Erick was imprisoned last year in a government crackdown. While Erick has been freed, as this story on the IARJ website points out, journalists continue to decry the government’s harsh treatment—including crippling fines. You can help the cause by visiting the IARJ story about Erick and sharing it on social media, which we believe will add to public pressure against the government’s treatment of him.

Click this image to read Ed’s review of Call of the Wild.