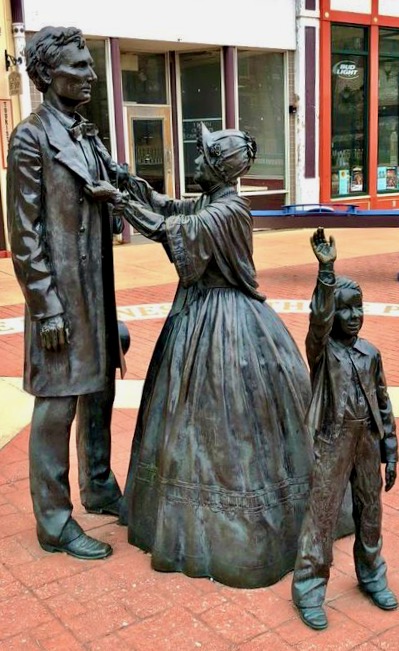 If you’ve visited Springfield, Illinois, you may have a photo of this popular statue with family members joining this Lincoln family scene. There are countless snapshots of this tableaux on social media.

This is Quiet Fire, a reflection on the spiritual life of Abraham Lincoln and its relevance to us today. Welcome. Here’s a Lincoln quote for you:

It’s the first Tuesday night in November of the year 1860 and the telegraph office in Springfield, Illinois, has received the results of the vote from the state of New York. Abraham Lincoln is assured of winning his election to the Presidency.

A little before two o’clock in the morning Lincoln walks home. One historian (Ronald C. White) records it this way: “By everyone’s remembrance, Lincoln remained remarkably calm through the long evening. He did exclaim that he was ‘a very happy man’ (But then) … as church bells rang, and cheers exploded, Lincoln finally headed for home. ‘Mary, Mary, we are elected.’ ”

What are we to make of this?

He remained remarkably calm, and his first personal words about this momentous event are to his wife, as he gets back home, and calls out in the first person plural pronoun: “We.”

Mary, Mary, we are elected.

If there was ever a time to focus on oneself—one’s own ego—this win would be it. But—and this is why we keep looking at the spiritual life of Lincoln—this is not for him a First Person Singular moment.

Nor should it have been. Mary was a passionate politician. She believed in politics, had been around it all her life, believed in Lincoln’s skills more than he did, and she knowledgeably and personally companioned him in his work all his adult life. Theirs was an unusual 19th-century marriage in many ways.

Because he was personally calm he could be aware of the relationships he was in, including, most significantly, with his wife Mary. So it is, “We are elected.”

Clam in the midst of storm is a hallmark of a spiritual person. The stories of such spiritual calm are endless in spiritual literature. Jesus in the storm-tossed boat with his disciples is just one. Joan of Arc before the flaming stake another.

There is only one reason for this poise and composure, and the storm-tossed person has an even keel, they are balanced by something else. And it holds them.

This is not magic. It is simply that the person thinks about something else, some other, more than about oneself. The even keel of spiritual life is to center yourself on something larger than yourself.

This is Lincoln as a spiritual person. He shows this again and again. Especially we see it in his elections. Historians record that he again and again lets go of himself.

So, first, there he is at the age of 23, the wrestling champion of his new home town New Salem, Illinois, where he can crow “I’m the big buck of this lick.”

Two of the smartest men in town have asked him to run for the state legislature. They all hope he can win some improvements in their local river, the Sangamon, so that steam boats can come upstream and make a real town out of New Salem. He agrees to run. He writes a campaign flier. And this is what he says: if I should not win this election, “I am too familiar with disappointments to be very much chagrined.”

How about that! Hi folks. I’m running for office. But if I don’t win, well, hey, I am real familiar with disappointment, so no chagrin here.

He adds: I am running for the state house with my only object being “that of being truly esteemed of my fellow men, by rendering myself worthy of their esteem.”

How about that too?! I want you to hold me in esteem and to know that I want to act in a way that makes me worth your esteem. This is not a selfish man. This is a man rooted in larger mutual relationships.

So Lincoln is a truly humble person. He cannot help but think of himself as a humble person and from that flier on to the election of 1864 he refers to himself 35 times as humble Abraham Lincoln. He’s not making this up.
But at one of his election rallies a fight broke out and he stepped into the crowd and, at six feet four inches and then 214 pounds, picked up the culprit that started it and reportedly threw him 12 feet away.

Lincoln lost that election. Country-wide he lost. But in his little town of New Salem, where he most cherish his esteem, he won 277 votes out of 300. That’s a 99% approval rating. He said it was the only election where he was beaten by the direct vote of the people.

But in August of 1864, the country was in the midst of a Civil War and he was sure he would not be reelected. He wanted to be. He said quite plainly, “I desire to be re-elected” But he wrote a letter to the man whom he thought he would lose to. Told him how he would help him try to save the country between the election and the new Inauguration. Sealed the letter. Had all his cabinet sign the back of it to certify it, and put it in his drawer.

His opponent was the infamous general who wouldn’t fight, George McClellan. Lincoln was willing to go through with the election win or lose. Saying this “I know not the power or right to resist them. It is their business, and they must do as they please with their own.”

The election was the people’s right. It belonged to the people not to the President. We must have the election, he said. He would not postpone or cancel it. He proclaimed: “We cannot have a free government without elections.” If the rebellion can postpone this national election he said they might as well have claimed to conquer and ruin us. There were multiple levers of power he could have used to move the election to his favor and he did not. That’s that spiritually humble thing again.

And as his wife Mary said, He was “almost monomanic on the subject of honesty.”

Lincoln won, of course. At the War Office when he received the news that he had won, and by a land slide, every state but three, he said, there is Mary back at the White House and, quote, “She is more anxious than I” and so he left to go back, and indeed, once again thought in terms of “we”—we, himself and Mary; we, his political party; we, the nation; we, the people.

That is a humble and communal spirit that lights him and can light us, down in honor, to the latest generation.