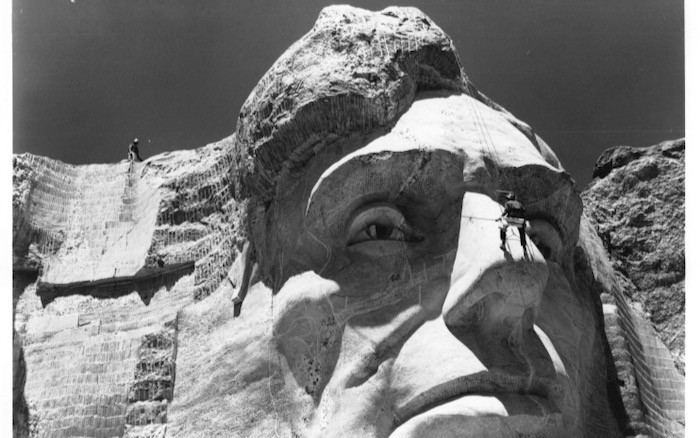 FINISHING LINCOLN’S NOSE—Between October 4, 1927, and October 31, 1941, Gutzon Borglum and 400 workers sculpted the 60-foot-high carvings of United States Presidents George Washington, Thomas Jefferson, Theodore Roosevelt and Abraham Lincoln to represent the first 130 years of American history. These presidents were selected by Borglum because of their role in preserving the Republic and expanding its territory. The carving of Mount Rushmore involved the use of dynamite, followed by the process of “honeycombing”, a process where workers drill holes close together, allowing small pieces to be removed by hand.

“After the age of forty a man is responsible for his face.”

For fans of Lincoln this is an often-quoted sentence. Lincoln’s point of view is that the inner life of a person, and the ethics and spirit that follow, are the responsibility of that person as they age. Over time something inside should show up on the outside.

The “Ancient”—as his young male secretary John Hay called him—had been asking Lincoln how he felt about a particularly vile man they had just met.

Lincoln’s wisdom is that actions from inner goodness, or inner evil, will show up on the outer face.

Lincoln is talking about an ethical perspective. We can also see that art brings the inner life up and out. Artists learn how to bring things inside to the outside, whether that is the soul of a painted flower, the spirit in a moving dance or the emotion in playing music.

This is can be seen in the grandeur of a Cathedral, for example. The large and holy external building holds us small and little inside. We take the spirit in, we are inspired and moved.

Large statues do the same thing. A statue in a cathedral or outside is larger than the worshipper for a reason. It is to inspire the believer to feel that no matter how small and finite they may be, this statue is a reminder that there is a big and beautiful goodness out there in the world, a God-send. We can be opened up to feel something larger than life.

This inspirational purpose of statues is also true in the secular world, and in the civil religion of any society. In daily headlines this summer, we see how important these large iconic statues are in a nation’s life. That is why dozens of statues have been removed since the May 20, 2020, killing of George Floyd. Wikipedia set up a special page just to list the many monuments that have fallen.

When we put someone on a pedestal we mean it to inspire us to a greater good. That wouldn’t work if the statues were smaller or lower than we are. And if and when we no longer feel that a greater good is re-presented—then it needs to come down.

Have you ever stood inside the temple-like columns of the Daniel Chester French Lincoln memorial, itself ninety-nine feet high. You look up at the nineteen-foot-high statue of Lincoln who is seated, and who, if standing, would be twenty-eight-feet tall.

In those moments we can have an experience of our inner feelings being connected to a bigger and a better world. Out there.

That is why our statues are so important. We need to and want to feel small only in the presence of something larger that is good.

Now Gutzon Borglum, the man who made Mount Rushmore with its large faces and heads of four Presidents, deeply knew all this about artistic expression and sacred inspiration especially through large sculptures. He wanted the goodness of Lincoln to seep into us while we are temporarily reduced in size and so humble. From the ground level at Mount Rushmore to the top of the four presidents is 500 feet.

Lincoln’s face and head are more than twenty times larger than the life masks that Lincoln had made and Borglum had held in his hands. He had come to value the inner life of Lincoln and wanted as an artist to make the outer version of Lincoln.

Borglum was a Danish immigrant’s son from Idaho. This was secular American work he was doing, but it uses a time-honored traditional spiritual practice from the world’s religions.

That is a sacred pattern. It is evident in the famous encounter that the Roman Catholic monk and writer Thomas Merton had on a journey to Asia, just a few days before his death. Merton, at that time, was reaching out to other religious leaders, especially Buddhists. He met with the young Dalia Lama, he dialogued with D.T. Suzuki, and also with the Protestant Civil Rights Leader Martin Luther King, Jr. and Rabbi Abraham Joshua Heschel, the Hebrew mystic and scholar. 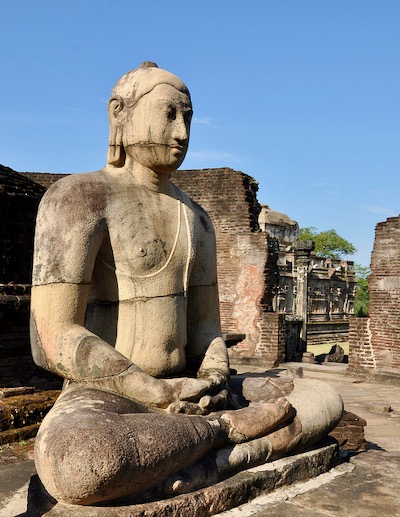 On this journey, in Sri Lanka, Merton encountered the four large statues of the Buddha at Polonnaruwa. It was a life-changing experience for him, famously called his Illumination.
At the large preserve near Polonnaruwa he approached the reclining Buddha that is over 46 feet long and over 15 feet high, a standing Buddha who is over 22 feet tall, and two other statues.

Merton had written that, “The presence of God is like walking out of a door into the fresh air…and breathing it in.”

He had that outdoor open-air inspiration when he made a pilgrimage to these enormous Buddhas. He wrote that “Looking at these figures I was suddenly, almost forcibly, jerked clean out of the habitual, half-tied vision of things….an inner clearness, clarity, as if exploding from the rocks themselves became evident and obvious….All problems are resolved and everything is clear, simply because what matters is clear.”

His smallness next to the very large images gave him a spiritual perspective, an orientation to all that really matters and a discernment of all that does not really matter. The rock itself seemed alive with the presence of holiness, and his own real self had come into full view. He felt it inside himself, next to that great outside. “All matter, all life, is charged with dharmakaya,” the Sanskrit word for the most sublime and essential reality in the universe, the cosmic body of the Buddha—what Merton, as a Christian, would know of as the self-emptying love and mercy of God.

The sculptor, Borglum, once said, “We want to see what we care for. We want to feel the private conscience that became public conduct.”

Lincoln was responsible for his face and at the end of his life he shows peace and compassion. We care about this spiritual journey, from large inspirations to true inner thoughts and feelings, we too can be lighted down in honor even to the latest generation.