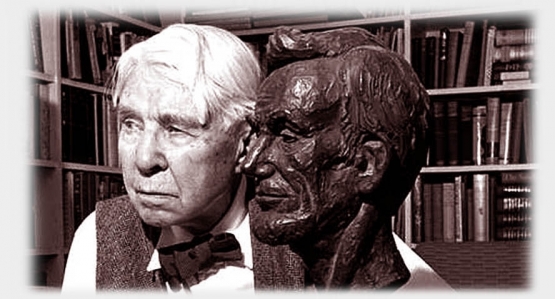 I have a Lincoln quote for you from The Prairie Years, the opening of poet Carl Sandburg’s multi-volume, Pulitzer-Prize-winning reflection on Lincoln’s life. This is how Sandburg described the spiritual foundations of Nancy Hanks, Lincoln’s “Sweet Angel Mother”—

It could be that she was sad with sorrows like dark stars in blue mist, with hopes burned deep in her that beyond the everyday struggles, the babble and gabble of today, there might be what her brightest dreams told her. She read their Bible. One who knew her said she was a “ready reader.” She was a believer and knew—so much of what she believed was yonder—always yonder. Every day came cooking, keeping the fire going, scrubbing, washing, patching, with little time to think or sing of the glory she believed in—always yonder.

Certainly Nancy Hanks—who died when her son was only 9—was shaped by the revivals that swept west across America in the beginning of the 1800s. Some called this wave another Great Awakening, some felt it was the very Kingdom of God in America. As Sandburg tells the story, the perpetually overworked Nancy Hanks simply thought of it as a faith in “yonder.”

Yonder is a spiritual word whose time has come again. It is a word like other spiritual nouns—like bliss, grace, enlightenment, beatitude. These words are almost verbs because they carry such life, words that as nouns hardly cover the state of being that they refer to. They can be adjectives and adverbs.

Yonder is a mix of vision—horizons—like the prairie lands that stretch out to the edge of the sky, like the ocean of land that the prairie is, and wonder. In the mix of vision and wonder, Yonder becomes an envisioned and visionary place.

Yonder is a feeling, a wonder, like the story-book awe that greets the little animals at the edge of the riverbanks under the Wind in the Willows, when morning light comes and the sound of the flute of the great God Pan floats over their little ears. Yonder is like that awe. A natural holiness.

Yonder is when the hopes of a people are believed in so much they go beyond themselves to achieve what is then called glory.

Do you remember that word, “glory,” at the close of Sandburg’s passage? He admits that Hanks’ real aim was “the glory she believed in—always yonder.”

That’s the meaning in title of the 1989 film Glory about the Black soldiers of the Massachusetts 54th regiment who tried to take South Carolina’s Fort Wagner—in an even larger battle to prove that Black lives matter.

So glory is that place where politics and the real struggles of people mixes with values and vision.

That is the vision involving the spirit of yonder that Lincoln grew up with, and never lost.

This is Quiet Fire, the spiritual life of Abraham Lincoln.