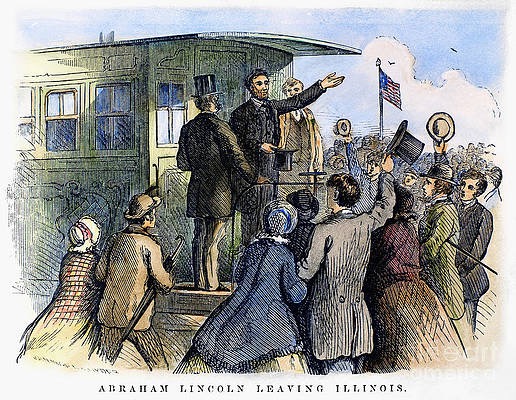 FANCIFUL AND FUN—BUT NOT FACTUAL—This was a popular lithograph envisioning Lincoln leaving Springfield for his long journey to Washington D.C. It’s a cheery image pro-Lincoln families could hang on the wall. But—it’s not how that scene actually unfolded. (Below, today, we have a journalist’s eye view.)

“Friends—No one, not in my situation, can appreciate my feeling of sadness at this parting.”

These are the first words of Lincoln’s Farewell Address, given on a rainy morning, February 11, 1861, at the railroad depot in Springfield. A thousand or so of his friends and neighbors, no doubt some barking dogs as well, are up early to bid him fare well as he leaves home to become President.

It is called an address. It is shorter than the Gettysburg Address. Very uncharacteristically, Lincoln spoke without notes. His words are prayer-like and they invoke the mystic chords of memory and the abiding presence of the Divine Being who can be “everywhere for good”.

The words of his Address are so prayer-like that you can sense the silence within them and the silences that must have fallen upon the upturned faces listening to him.

The heart-felt sincerity of his words that day are obvious in the way he delivered them—spontaneously, without having written down any script in advance, not even notes. 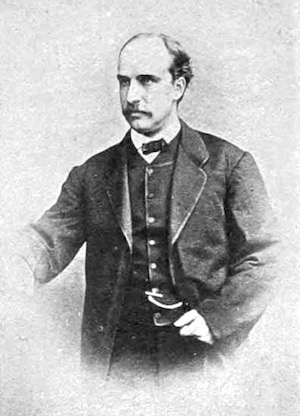 HENRY VILLARD about the time he covered Lincoln’s rise to the presidency. (Click his photo to read his Wikipedia biography.)

However, once he spoke them, his parting words were so poignant that Associated Press correspondent Henry Villard begged him to commit the words to paper. So, as the train jolted along the tracks, Lincoln and his secretary did just that, which is why we have them today.

Had Villard not insisted, Lincoln would have left the station, the words only held in the memories of the crowd, and would have returned to his more characteristic silence.

Silence follows Lincoln like a spiritual friend wherever he goes. Sandburg has written that the element of silence was great in the making of this man. Many of the personal reminiscences written by the men and the women of his time will say that conversation with Lincoln began with his extended and silent listening to them.

This, then, is the “quiet” that is in the quiet fire of Abraham Lincoln.

Now one reason so many people, for so many years, have found, and are finding, something about Lincoln they love is that he was a many-sided person. There is hardly a characteristic of Lincoln for which he did not also possess the opposite. He had many paradoxes, a Euclidian array of equal opposites. And they all held together. He didn’t just hold the county together, he kept his head together. It wasn’t just 36 states he eventually held in union.

People find a side of Lincoln they love: his logic, his heart, his humor, his sorrow, his power, his humility, his voice, his written words, AND his unspoken inside side.

This is reason we can talk about the spiritual life of Lincoln. He was extraordinarily deep, inside. His was a well spring.

There is as much fire in Lincoln as there is quiet. His fire gives off light, heat, inspiration and power. His quiet contains a sense of yonder, his intelligence, and his well spring of goodness.

We have a language for these paradoxes in Lincoln. We can talk about introverts and extraverts. In his own paradoxical way Lincoln was defiantly both. You can feel the introversion in his Farewell Address. “My Friends, No one, not in my situation, can appreciate my feelings of sadness at this parting.”

This is as close as we ever get to Lincoln saying out loud, “You just don’t know how I feel.”

His law partner Billy Herndon once said that he felt he never really knew Lincoln, that no one did, that Lincoln held himself close to his own chest in a quiet almost mysterious way.

Of course in this Farewell Address Lincoln is sharing his inner life. And they do know how he feels because he is addressing their inner life too. In fact, emotionally, every one there is in his situation as well—they are the other side of this painful parting. He is addressing the unspoken feelings that everyone is feeling, feeling inside. He is giving voice to what they all are feeling.

Silence is how the spirit is present, in joy and in sorrow, in terror and in beauty, in deep feelings and in long thoughts. It is the way we feel awe and horror.

This is the range of silence that Lincoln brought with him from the wilderness to Washington.

We can love the inside story of this man, noting, as maybe a few did on that rainy morning, that it was February 11th and the next day their gawky neighbor would have his birthday, his fifty-second. He would have celebrated many birthdays in Springfield. But this often tightlipped man makes no mention of that in his farewell.

This is a bit of the quiet that is part of the paradox of Lincoln’s quiet fire, and it can follow us down in honor to the latest generation.

And this is what the day actually looked like, thanks to a journalist’s sketch— 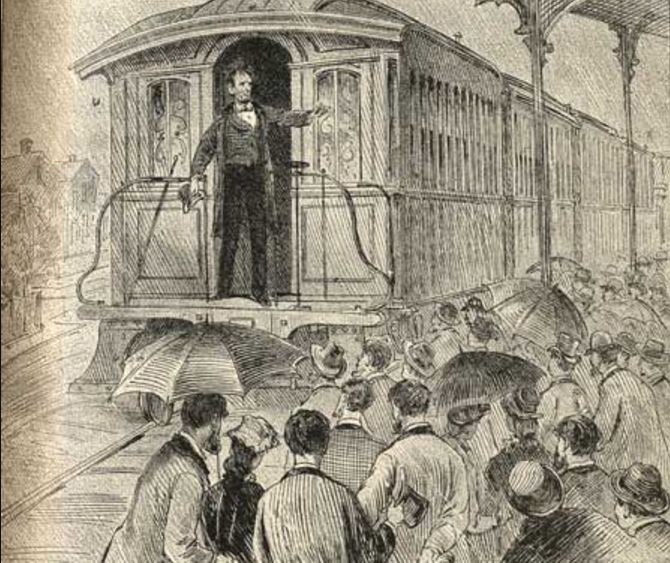