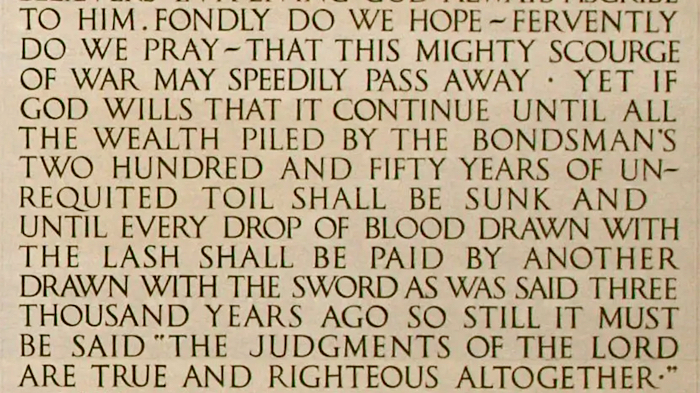 This was Lincoln’s devastating assessment of the Civil War’s overwhelming cost—and its transcendent meaning—as expressed in his Second Inaugural. The entire inaugural address was engraved on the wall of the Lincoln Memorial in Washington D.C.

This is Quiet Fire, a meditation on the spiritual life of Abraham Lincoln and its relevance to us today. Welcome. Here’s a Lincoln quote for you—as penned in a secret 1862 meditation he wrote that later was echoed in that powerful passage from his Second Inaugural Address.

“The will of God prevails. In great contests each party claims to act in accordance with the will of God. Both may be, and one must be, wrong. God cannot be for and against the same thing at the same time. In the present civil war it is quite possible that God’s purpose is something different from the purpose of either party; and yet the human instrumentalities, working just as they do, are of the best adaptation to effect his purpose. I am almost ready to say that this is probably true; that God wills this contest, and wills that it shall not end yet. By his mere great power on the minds of the now contestants, he could have either saved or destroyed the Union without a human contest. Yet the contest began. And, having begun, he could give the final victory to either side any day. Yet the contest proceeds.”

What were the origins of this view of these cataclysmic events?

Most every wagon coming down the Wilderness Road, or out the Cumberland, packed a Bible, maybe wrapped in a quilt. The Bible was the code book for the coming civilization.

The Bible was the iPhone of the New World. It could bring up most of the Old World. It was basic social media. There were some who also had a Shakespeare, or Blackstone’s English Common Law. A few others had a small library with Enlightenment philosophy, the Greek and the Roman classics.

The language of Lincoln’s new world was a hybrid of the Bible, of law, Enlightenment and slang. “Americanese” became almost ungovernable, a vernacular something—secular and sometimes almost sacred. Those who spoke or wrote about America brought forth new ideas with old words. This was going to be the new kingdom of God in America or the new republic without the old world King.

There was an underlying obsession: Could the New World be free of the old? Was it better? Was it to be judged as a shining light when seen by the old world? They were watching. They were judging and a judgment was required to make this meaningful.

Nowadays, when a newly aggrieved citizen cries out, “God, why are you doing this?” it is a cry of judgment against the old judge. Making judgments makes meaning.

Lincoln himself put God on the witness stand in his secretly written Meditations of the Divine Will in 1862, just after the war had begun. In that meditation, he says pretty much the same thing as our aggrieved citizen—except that Lincoln does not whine and doesn’t think it’s about him. With his own profound logic and heart, he does try to judge the Eternal. Today’s citizen or yesterday’s Civil War solider can cry out, why are you doing this to us, God? Lincoln cried a lot. Lincoln truly wept his way through the Civil War. But when he did cry out—he followed with a resolve to meditate.

Of course, “why” is a parent’s question (“Why are you late?!”) and to turn it back on the Parent God is a nearly blasphemous thing to do. But this is America and we have rights. The Enlightenment philosophers did encourage us to question God, even God’s judgmental analytics.

Lincoln put God on trial again in his Second Inaugural. He puts the North and the South on the witness stand. He passes some judgments on them all: North, South and God. Both sides are guilty of the war because slavery is, he says: “American.” One side is guilty of fighting for slavery, but all Americans are guilty of slavery. God, to Lincoln, is not guilty, or only guilty of being a righteous god.

But then in a modest tongue in cheek he says, quoting Jesus obliquely: Let us judge not, that we be not judged.

But of course he has already passed on his view of God’s judgment. In Lincoln’s mind God willed this war as a blood punishment for the blood spilled in the sin of slavery.

There is some pilgrim’s progress going on. The pilgrim nation has to go from a bad starting point to a good end. It is a moral journey that implies a judgment at the end to make it meaningful, good or bad. This is the biblical code that Lincoln grew up in.

America will be good when, but only when, it seems, a judgment—even a punishment—has been meted out.
The wrath of God, the grapes of wrath, and God’s judgment, were not thoughts hidden from the 19th century Americans, whether they believed them or rejected them.

In a recent newspaper interview, in a poignant plaintive lament, a 75-year-old single American woman in lockdown with her cats and dog says, “I must apologize to God for what I feel.” I must apologize, she is saying, to the one great standard of meaning and truth, because God must surely judge her for what she is thinking and feeling nowadays about God and America. She, like a Civil War widow, feels estranged from God, has a voice of lament and complaint that, she fears, would offend God or at least hurt God’s feeling. She is saying: “I don’t not like what is happening. I do not approve. I judge it as all wrong. I’ve almost had it.” Then: “Sorry, I apologize. I’m sorry God, but really…! I’m sorry America but….”

But, now is when we can be good. Lincoln would have thought that. “When” is when suffering cleanses us like a Greek tragedy, or transforms us in the Divine Will of a righteous God, stamping out the vintage of the grapes of wrath. Americans could be good after the Civil War, he believed. Healing would be a matter of recognizing that we have all been in a state of estrangement, the united states of estrangement.

That is what Lincoln recognized when he saw the judgment on all of us, on both sides. That is why he could have asserted that we must not be enemies. We are guilty friends who belong together. Unfortunately, few really heard what he had to say.

Lincoln had told Congress, we must all rise with the occasion and see ourselves in each other. We would free ourselves as we free the slaves because we are all enslaved by slavery. But they were enthralled in a truly un-American way of life, not what the Kingdom of God in America was to be.

The tragedy of Lincoln was that too many Americans were not able to see themselves in the Other. John Wilkes Booth did not see his white face in the black face. Yankees did not see their money in the Cotton Gin’s wealth. The Fire Eater did not see his own righteous indignation in the coming terrible swift sword.
Lincoln’s sermon-Inaugurals failed.

People couldn’t just start out trying to see the better angels in the other’s nature. Not until they wept. That is where Lincoln was taking us.

This is Duncan Newcomer and this has been Quiet Fire—the spiritual life of Abraham Lincoln.