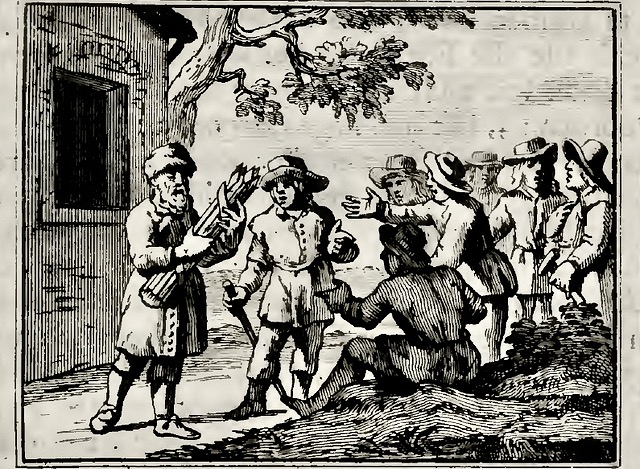 Here’s a Lincoln quote for you: “He kept the Bible and Aesop’s always within reach, and read them over and over again.” This is from a childhood friend, David Turnham.

Lincoln would memorize many of Aesop’s fables. Among his favorites was The Old Man and His Sons in which a wise old man asks his sons to break a bundle of sticks. They can’t—until the old man explains that they should have started by taking the bundle apart. Individual sticks are easy to snap.

Here’s the moral at the end of one English version of the fable: “Nothing is more necessary towards completing and continuing the well-being of mankind than their entering into and preserving friendships and alliances. The safety of government depends chiefly upon this; and therefore it is weakened and exposed to its enemies, in proportion as it is divided by parties. A kingdom divided against itself is brought to desolation.”

Of course Aesop knew where that maxim came from, “the best man that ever lived” he says at the end of another fable. Lincoln was most likely about ten years old when he first read these stories. His favorites were The Bible, Aesop’s Fables and Bunyan’s Pilgrim’s Progress.

We come to Abraham Lincoln divided against ourselves in many ways. One of his most remarkable abilities was how well he housed things divided. He was liberal in his goals but conservative in his methods. He was secular in his intellect yet often religious in his language.

Lincoln, however, did not sacrifice his passion in order to accommodate the divisive wars going on inside him and ‘round about him. Rather with his own quiet fire and intense concentration he found a bright point of transcendence, a third alternative, to many of the darkly irreconcilable conflicts of his era.

We study Lincoln, his intellect and his spirit, hoping to understand more how to hold our house together, spiritually and politically. As he became President many Americans were talking past each other in languages that deepened division. Christian piety was strong in the country and yet some preachers increasingly mined the Bible for an ore to forge into steel for war. The self-righteous used religious language, North and South.

Not an orthodox Christian in any traditional sense, Lincoln’s own fiery furnace yielded a nearly biblical theological language that we hold as almost sacred and certainly unifying. We have wide religious differences and wonder what sacred canopy covers us. Much of his language can hold us.

As he grew to become one of our more literate and eloquent Presidents, much of the educated elite was leaving evangelical religion for the modern fields of science and rational enlightenment. Science fueled industry, reason seemed to erode the religious moral core, and educational and economic divisions grew.

Poor and formerly uneducated, Lincoln learned practical science and enlightened reason well. But he could, in fact he did, see a religious moral vision beyond them. We have trusted technical progress and higher education and can wonder if religion holds any practical or moral vision for our time.

Lincoln had two points of reference that stood outside of the liberal-conservative, secular-religious, views of his time. One point of reference was that he saw the American experiment as a beacon to the peoples of the world. In that sense he shared in a secular way the original Puritan vision of an experiment set like a beacon on a hill.

In fact, unknown to him, six generations back, in the late 1630’s, his ancestors had moved from Hingham, England, a hot bed of Puritan revolt, to Hingham, Massachusetts in the Bay Colony. Throughout Lincoln’s struggle to hold the American proposition together, to prove itself to a doubting world, he had in mind a light for the common peoples of the world, especially old Europe and benighted Russia. He felt deeply that America was crucial to the world.

His second point of reference was simply this: He felt that American was important to God and that God was crucial to America. He didn’t go into his life believing things like that. In fact it was only fate and necessity that he first believed in. But fate—from the view of the fiery trial he lived in his last five years—took on the face of God, and necessity took on the hand of God’s justice and judgment, calling for God’s mercy.

With these two perspectives Lincoln could take a political stand greater than that held by either side in the war, and he had a moral means for the goal of union. The defeat of the Southern rebellion was a win for America in his mind, and a win for American was a win for the real freedom of the world’s peoples who had been ruled by despots for years. The eventual moral means of conducting the war—emancipation—became his theological stand and a necessary response to the demands of God’s justice. Not only was the world watching him and the American experiment, but God was as well. Lincoln would say in his Second Inaugural, sounding like a Biblical Prophet, that God could compel justice by imposing suffering for the mutual evil of slavery.

The things that divided the house he presided over did not divide him because he had these two greater points of view, the world and God. Opposing forces, however, seemed to settle on Lincoln’s shoulders like gigantic birds of prey.

But, as historian Allen Guelzo says in his book Redeemer President, Lincoln actually had an increasingly Calvinistic notion of God’s providence. It led him to stay with a war policy that extended the war. “Lincoln had to step outside liberalism and surrender himself to the direction of an overruling divine providence whose conclusions he had by no means prejudged.” What unified Lincoln more and more in the end was his conviction of divine providence as the just cause of the extended suffering.

Guelzo attributes Lincoln’s depth and resiliency, his “great resources,” to this cohesion. He followed neither bird of prey, abolitionist nor unionist, on either of his stooped shoulders. Yet he ended up fulfilling the abolitionist and the unionist hopes, despite them not because of them. He had this third way, and in anyone less skeptical and thoughtful it would have seemed like religious fanaticism.