This week’s quote is: “At present we are told that America is being made great again, but specifics are hard to come by. It is true that, compared with the America of memory, little has been done recently to demonstrate modest foresight, let alone grand vision.” 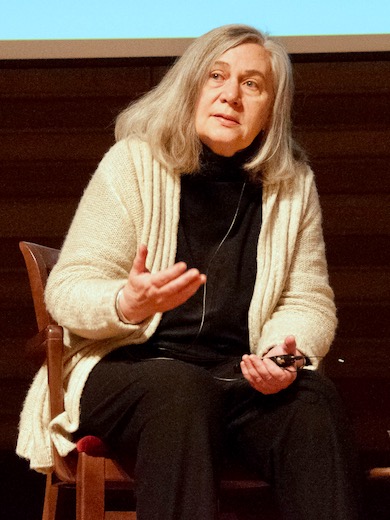 No, that’s not Lincoln reflecting on the challenges of his turbulently divided America. Those are the words of Christian novelist Marilynne Robinson in the Opinion pages of The New York Times this week. Her lengthy essay was headlined: Don’t Give Up on America. This country is not just an idea. It’s a family.

Lincoln inspires parents to give their daughters or sons tokens of their own deep interest in Lincoln—perhaps family photos of trips to Springfield, framed old copies of the Gettysburg Address, things like that. This often really happens.

In her Times column, Mrs. Robinson never specifically mentions Lincoln. But her challenge in that piece—and our challenge as well—is much like the awesome task that faced Lincoln and the generations around him: What to do with America?

Mrs. Robinson—whose most famous novel is the Pulitzer Prize-winning Gilead—said in her Times piece that America is more than an idea, it is a family.

Lincoln was deeply drawn to America as an idea. Lincoln was as much an intellectual as he was a politician. But he makes an everlasting blend of the idea of America and the social and political life of America. He re-coins the words “of the people, by the people, for the people.”

America to Lincoln was an idea he hoped people would embrace nationwide. “The dogmas of the quiet past, are inadequate to the stormy present. The occasion is piled high with difficulty….we must think a new, we must act anew.”

The Civil War was about the idea of America, and particularly the unfinished idea of all people being equal. It was a growing family, a unique social experiment, a human proposition.

Not long into the war Union soldiers began to refer to President Lincoln as Father Abraham. Lincoln was an Old Soul even as a boy. He had gravity. It was in the nature of his spirit to be grave, serious, profound, sorrowful.

Of course he also had a way of being forever young. As a father, he could not control his own children. He could barely control his own rollicking jokester humor. He nearly made a romantic mess of his life when he youthfully crashed into the world of women, Eros and love. His favorite poets were the big bad boys Lord Byron and Bobbie Burns. The Bible and Shakespeare barely kept a lid on Lincoln.

Lincoln as Father Abraham brings us into the family of America that he helped conceive, bring forth and offer a new birth of freedom.

Lincoln as an intellectual brings new meaning to the idea of America as much as Lincoln fathers a newly born America.

He was and is a Father Figure to the American Family in the same tragic way that fathers are in the plays of Shakespeare trying to govern a human family of near-impossible variety. Father figures in Shakespeare are flawed characters who have the full range of human angels and devils within them. They meet fates like, Lincoln’s own, tragic, and yet his with ongoing, nearly eternal inspiration for us, the witnessing family.

Shakespeare as the author plays the same role as God does in the Bible, the Father progenitor who survives his own creations. Even in the Bible the God-man Jesus has a tragic encounter with the human family before his love and spirit take over.

Mrs. Robinson is right to move our relationship with America, as did Lincoln himself, from just an idea to a relationship. Of course ideas, and the Idea of America, seem much more orderly than the Family of America. We know about family life, the tribal wars, the sibling rivalries, the divorces.

Lincoln experienced this first hand. Robert E. Lee decided to betray his oath as a soldier in the American Army and went back to the family home to fight for his tribe—to fight, as he said, for Virginia. The tribe of Virginia, or even the idea of Virginia, to him, had more of a draw than the idea of America. He simply was not the intellectual or moral thinker that Lincoln was.

Perhaps, when we think about the spiritual life of Lincoln, as it begins to have an effect on our own spiritual life, we see that his idea was that democracy was for the world. It was not just for America.

To this day, people around the world still look to Lincoln.

Father Abraham is the kind of figure who tells us, as he said, not only to think anew but to act anew, so that we can, as he did, save our country.

This is Quiet Fire, the spiritual life of Abraham Lincoln.