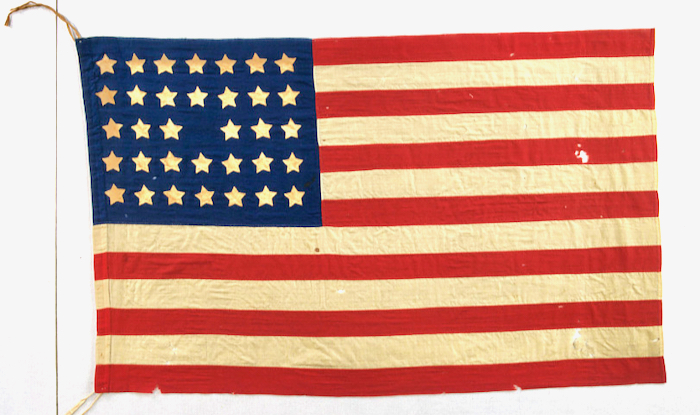 THE 34-STAR U.S. FLAG, which only was used for two years after the admission of Kansas as a state in January 29, 1861. It became obsolete on June 20, 1863, when West Virginia became a state. As a result, Lincoln was the only U.S. president to fly the 34-star flag. No stars were ever removed from the official flag—not even during the Civil War. Photo courtesy of the Smithsonian Institution.

“May my right hand forget its cunning and my tongue cleave to the roof of my mouth, if ever I prove false to those teachings.”

This is a sacred quote with a secular tweak.

Lincoln is quoting from Psalm 137. We may know this psalm best from musical versions that feature its words, “How do I sing the Lord’s song in a strange land.” Lincoln is using the powerful poetry of this Psalm. It proclaims the Hebrew captives’ faith to remember Jerusalem even while captured in exile in Babylon.

Bible words would often spring to Lincolns lips. What faithfulness, what teaching, is Lincoln affirming here?

The “teachings”—and that’s the word he substitutes for “Jerusalem”—are the words of the Declaration of Independence and the Constitution. He is not in exile in Babylon but he is in imminent threat of assassination.

His courage in the moment is to prove true to the idea of America. Like the singer in the Psalm who is remembering Jerusalem, they both are in dire straits.

It’s Thursday evening, February 21, 1861, and Lincoln is in Philadelphia on his over-thousand-mile train trek to Washington City to be sworn in as 16th President of the United States. Despite the danger he is outstandingly calm and resolute.

He will soon be taking off his stove pipe hat and wearing a soft Hungarian freedom fighter’s cap and a shawl to disguise himself and enter Baltimore on a secret train to Washington.

But he is in Philadelphia because he promised to be there. The next morning it will be George Washington’s birthday. He will be raising a brand new American flag, with a new star for the state of Kansas fixed on a field now of thirty-four.

At noon that day, down from Maine, also in danger, his Vice President Hannibal Hamlin and his wife Ellen will be secretly blanketed up in a sleeper car. They will be left unrecognized by hooligans breathing death and whisky.

Meanwhile Lincoln is pledging his faith in the teachings and principles that came from Independence Hall in Philadelphia, as he will remember, 84 years ago. He says this is a sacred hall. He has said Americans are God’s almost chosen people, and he will say, also spontaneously, “I would rather be assassinated on the spot than to surrender” his loyalty to the Declaration of Independence and to the principle of equality enshrined.

He testifies with these words, “I have never had a feeling politically that did not spring from the sentiments embodied in the Declaration of Independence…. (and earlier)… all the sentiments I entertain have been drawn from (those) which originated and were given to the world from this hall.”

He has, in a way, pondered this moment all his life. When he was 10 years old and had read in Grimshaw’s History about the American Revolution, he wondered what extraordinary “something” was going on in these events. What mysterious power or truth or idea?

Now the day before in Trenton he had said he considers himself only the “humble instrument of the Almighty” in the task before him. About this flag-raising he will say, “I could not help feeling…. as I have often felt, that in the whole proceeding I was a very humble instrument. I had not provided the flag. I had not made the arrangement for elevating it to its place. I had applied a very small portion even of my feeble strength in raising it. In the whole transaction I was in the hands of the people who had arranged it. And if I can have the same generous cooperation of the people of this nation, I think the flag of our country may yet be kept flaunting gloriously.”

What is a stake here is Lincoln’s way of seeing himself. Humble, yes. But indeed, as would be revealed to all his close friends on his death bed in four years, his arms were anything but feeble. In his dying night shirt the dignitaries there were astonished at the muscular power of Lincoln’s arms.

Also at stake is his stoic courage. The people in Philadelphia noted later how very calm and without alarm or fear he was when told of this first assassination plot.

And more at stake is this:

In the religious mind, a consciousness first found in traditional peoples, the world of stone and tree, is filled with spirit. Something more, something else. Some power that makes things be.

This force is what makes some things sacred, the very power of life being made real and present. The cosmos can show the holy. And the holy is what is most real, most valuable, most powerful, most full of Being itself.

In these moments in Philadelphia, with Abraham Lincoln, there were things in America’s life that he saw as sacred:  the flag, Independence Hall, and the Declaration of Independence. The religious mind knows that they are just things and also more than just things.

It is this religious feeling, first found in ancient peoples, that makes the world sacred, and can still, in the minds and hearts of those who see and feel such things, be a light, like Lincoln’s, to live by in honor down to the latest generation.