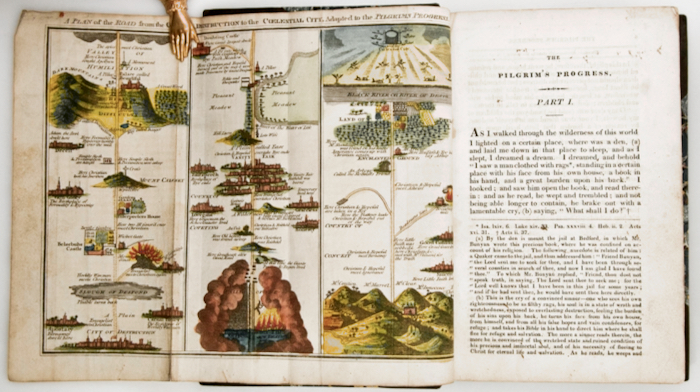 This 1820s edition of the original 1678 Pilgrim’s Progress was packed with vivid illustrations that would have caught the eye young readers. 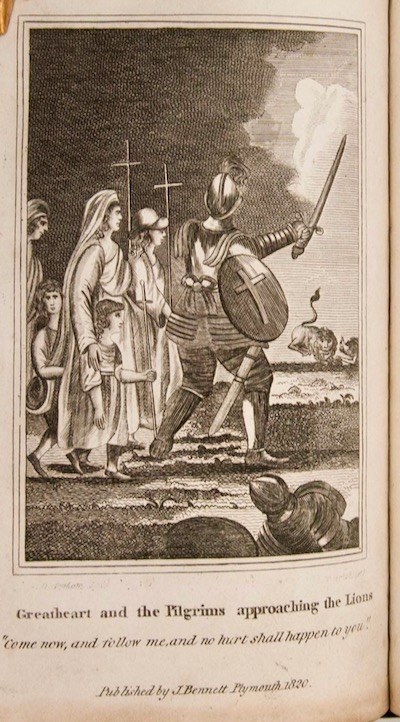 One of the black and white illustrations from that early 1800s edition of Pilgrim’s Progress. Lincoln surely would have found it an exciting tale.

“That I am not a member of any Christian Church is true, but I have never doubted the truth of the Scripture; and I have never spoken with intentional disrespect of religion in general, or of any denomination of Christians in particular. … I do not think I could myself be brought to support a man for office whom I knew to be an open enemy of, and scoffer at, religion.”

Lincoln is running for Congress. It is 1846. His opponent is the Rev. Peter Cartwright, a locally famous Methodist evangelical preacher. Those rumors of Lincoln being a free thinking infidel have once again been raised. So, Lincoln responds with these words on a handbill to the Seventh District of Illinois. He wins the election 6,340 to 4,829.

As a young man, Lincoln sometimes was called an infidel. In the setting of New Salem, Illinois, that meant he and a few of his bookish friends held a wide variety of views. They were not orthodox Protestant Christian views. That does not mean he was what we might call an infidel today.

He could have thought, for example, that the Bible was not literally inspired, or that the miracles of Jesus were not scientifically factual, or that the Creation only took a week. And he did not want to join a church. Lots of infidel views.

Yet Lincoln was fiercely interested in the whole matter of religious and spiritual life. At that time he even wrote a deep essay on the anger of God that he shared with one of his older male friends.

Lincoln was inspired by Pilgrim’s Progress, the widely known and read book by the non-conformist preacher and writer John Bunyan. That 1678 book was well known even on the frontier. The hero, Christian, meets all sorts and conditions of people along the path of his spiritual progression. Lincoln would have liked that. He was one of those open-minded questers.

But some people in New Salem in 1830, if they had known, might have wondered about two other spiritual figures from history. Johnny Appleseed, for example. He was about to take his mission for God and orchards into the Great Lakes area of the American frontier. As a mystic unchurched preacher, would they think he was an infidel?

What about Joan of Arc, a saint so inspired by God that she moved a nation to crown a king as divinely ordained—and yet they burned her at the stake? What would they have thought of an untutored military genius and saintly Roman Catholic girl?

To grasp the wide reach of Lincoln’s spiritual life we can easily imagine him liking and wanting to know such spiritual heroes.

Johnny Appleseed was a common and a rustic man with an uncommon mission: to plant the mystical word of God and to seed hundreds of apple orchards and douse village sites throughout the expanding west. John Chapman, Appleseed’s real name, was a non-conformist as was John Bunyan.

In Pilgrim’s Progress, Christian, meets all sorts of people who influence his spiritual journey. Bunyan himself was a maker and mender of pots and kettles, a tinker. Like Johnny Appleseed and Lincoln, Bunyan had little formal schooling. Yet he had great faith struggles and extraordinary language skills. John Bunyan was often thrown in jail for his non-conformist preaching. He had rugged endurance as did Lincoln and Chapman.

These three men were great walkers and talkers, men of intense religious fervors and wide-ranging beliefs. Lincoln traversed on foot all of Sangamon County as a surveyor. Bunyan and Appleseed both were itinerant foot-bound preachers.  While Bunyan was a mender of pots, Appleseed is often pictured wearing a cooking pot hat, not, of course, to be confused with Lincoln’s stove pipe hat.

Lincoln’s spiritual beliefs were similar to those of the iconic Johnny Appleseed. Both John Bunyan and John Chapman would easily have been close and kindred spirits to Abraham Lincoln in his early New Salem, Illinois, days. Shirt tail boys grown into rustic men with fervent faith and rhetorical skill.

Chapman was an evangelical follower of Emmanuel Swedenborg, himself an Enlightenment thinker, a mystic, and an inventor, among many other things. Swedenborg believed that God was peeking out through not only the Bible but also nature itself and through human reason.

These were beliefs Lincoln could agree with. Swedenborg also struggled with the existence of evil, such as war. He believed in universal salvation, as did Lincoln. He even had a belief in good angels that would meet each of us in heaven and bestow upon us the better angel of our own nature.

In the landscape of John Bunyan’s Pilgrim’s Progress we can imagine Lincoln meeting Johnny Appleseed, a frontier soul brother. We can also imagine him meeting a military and spiritual saint, that untutored young girl from the 1400’s Joan of Arc. Lincoln was always looking for an inspired fighting general who could lead the sacred national cause to victory.

Joan of Arc was a saint and like Lincoln she is hard to explain. How did such a mysterious figure ever come into history? No one, to this day, can explain how either of them came to be who they were.

At the end of his massive study of the life of that 15th century courageous young girl, Mark Twain himself concludes that we just cannot explain her. But Twain does write, on page 452 of his long-researched and passionately sincere historical novel Joan of Arc, that an artist who would paint Joan “should paint her spirit.”

Twain’s astonishment at the being of Joan of Arc rests on her pure and humble spirit and her bold unprecedented achievement for France against England. She lays the ground and the myths for the French nation. Her superhuman and even supernatural means of achievement led Samuel Clemens himself into a humble reverence, a new voice, without a trace of mockery or arch humor. He is as sincere as he will ever be in print.

Joan of Arc was a miraculous general and the fullest expression of obedient suffering and a noble, even holy, death.

Lincoln, however, had to find an able general in U.S. Grant, and then he left us with a nearly miraculous vision of a nation without malice toward the enemy, with charity for all and care for the wounded, and then his martyr’s death.

Lincoln was certainly no infidel. He was truly a John Bunyan type of pilgrim, with a nature so inclusive that he could be at home with these two remarkable religious figures.

In the torchlight of such a parade we too can be led down in honor even to the latest generation.